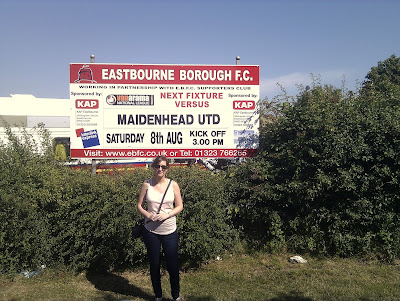 ^^^ The first competitive game of Alan Devonshire's second spell as Maidenhead United manager would, the fixture computer abacus had decided, take place at Eastbourne Borough (rather apt, bearing in mind that the town was developed by the Duke of Devonshire in 1859). With the Macleods (C + M + P) and Craig in Berlin, for the beer festival, I offered the wife a weekend away on the East Sussex coast. She didn't need much persuading. After mowing our front and back lawns (NOT a euphemism), in already hot morning sunshine, I checked Google Maps for traffic news before our impending departure. And good job that I did; accidents on the M4 and the M25 meant that it was the A-roads for us #scenicroute (I insisted on a minute's silence as we passed H*rsh@m). We couldn't escape heavy traffic on the A27 east of Lewes, however, and reached the ground just after 3pm (approximately 3hr 15mins after leaving home). Fortunately (sort of), we weren't the only ones to endure a difficult journey; like Wealdstone at Bath, Maidenhead's team coach was late arriving and so the kick off delayed. 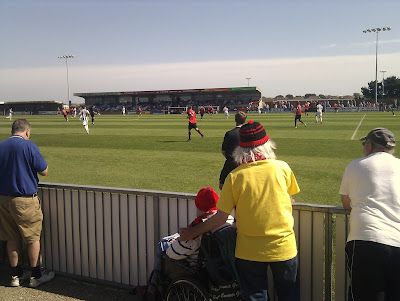 ^^^ The weather really was glorious. Bobble hats required for fashion purposes only! 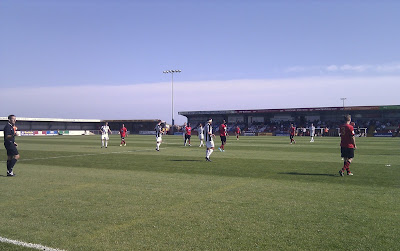 ^^^ First half match action. Evenly contested. The Magpies looked good. In more than one sense. I liked the new shirts - with thick black stripes down the sides - while the spine of the team has certainly been strengthened: Carl Pentney was assured in goal (not least with the ball at his feet); I very much doubt that there is a better central defensive partnership in the division than Dean Inman and Alan Massey (I was particularly impressed with the former); James Mulley and Ryan Upward were tigerish without the ball - and tidy with it - in midfield; Jake Reid was a powerful focal point in attack. Ben Wright - who reminded me, a bit, of Billy Cove - went close on a couple of occasions, while the normally lethal Dave Tarpey should have done much better with a shot that nearly went out for a throw. Wright, rather bizarrely, took the odd corner and from one of these Josh Huggins - head bandaged - skied the ball when he should have hit the target. It wasn't all one-way traffic, though, with the home side's Nathan Collier particularly impressive in midfield; reminiscent of Abdul Osman in playing style and physical appearance. Eastbourne's #10 (Nathaniel Pinney) should also be mentioned; I'll be AMAZED if I see a chunkier player in the Conference South this season. "He's overdone it on the Domino's Pizza," deadpanned the wife. 0-0 at the break. 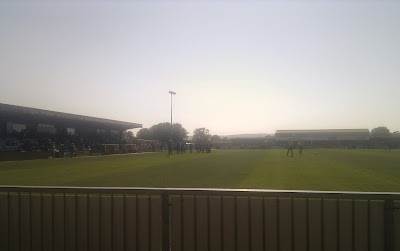 ^^^ Anti drums at football? There was a whole troupe of drummers on pitch at half time! Most, if not all, wearing kilts of some description. As bizarre - and noisy - as the sunshine was hazy. 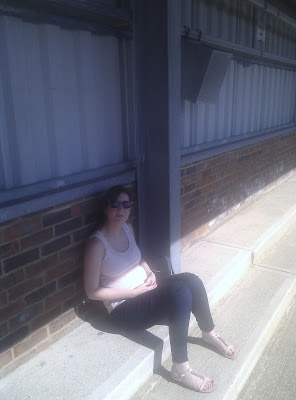 ^^^ The wife pointed out that there were bins attached to the stand; I think that this ingenious idea should be adopted at York Road to prevent DESPICABLE HOOLIGANS from throwing the blue plastic variety onto the pitch. 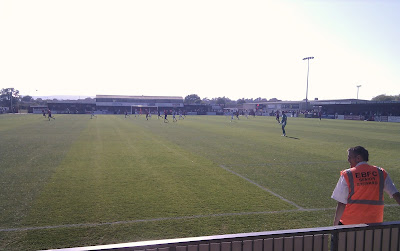 ^^^ Second half match action. The home side took the lead, with a penalty, after 53 mins. Maidenhead were level, soon after, when Ben Wright thumped home from the spot ("Where's our goal music?" enquired the away support, before mimicking the ditty that had blasted out on the PA just minutes earlier). The award seemed soft to me (and the wife); Huggins challenged for the ball with a defender and both had their feet up. When the whistle blew, I assumed that the referee had given a foul against Huggins (who didn't seem to be his favourite person). Hey ho. Win some, lose some. Maidenhead should definitely have had another penalty, a while later, when Reid was impeded trying to latch onto a through ball. The offending touch was slight - and the subsequent dive rather theatrical (you'd have to go some to knock Reid over) - but it was still a foul ... more so, I'd argue, than the 50/50 challenge on Huggins! The game remained tight, but the Magpies were beginning to gain the upper hand. Sam Barratt replaced Tarpey (the tannoy announcer as inept as the match officials: "I didn't see who came off, but number 15 replaced him") and made some penetrating runs down the left wing; Mark Nisbet replaced Huggins and snapped into tackles in midfield; Gavin James - great to see him back in a Magpies shirt, after his double leg break at Dorchester in March 2009 - replaced Wright and nearly put us ahead after a magical bit of skill. "We're gonna nick this," I said to the wife, just before Reid returned a half clearance with interest ... 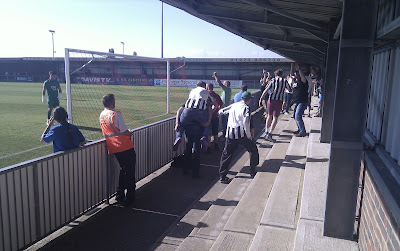 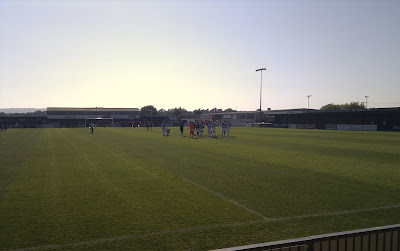 ^^^ Mr Logic (I think) started up 'Alan Devonshire's Black & White Army'; the popular chant continuing throughout the remaining few minutes of normal time - plus time added on - and, whilst sounding more than a little ring-rusty, it was certainly good to hear it. "I feel like I've gone back in time," said the wife. "My first Maidenhead away game in goodness knows how many years and Alan Devonshire's Black & White Army is being sung!". It didn't escape my attention that the man himself was straight on the pitch, at the final whistle, gesturing for the players to acknowledge the fans. Which, to a man, they did. Drax, take note. It bodes well that the group already seem bonded. The 'BAND OF BROTHERS BRING IN NEW ERA' headline, from the sports section of my Sunday paper, could seemingly refer to Maidenhead United as well as to the England cricket team. Anyway, the attendance was 551; the majority of which can have no complaints about the result. 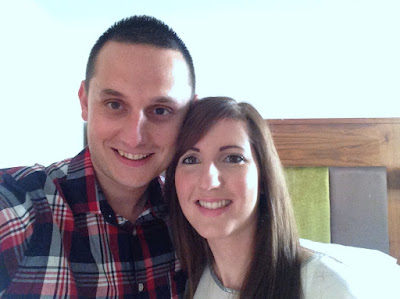 ^^^ The delayed kick off put paid to plans for a post match pint in the clubhouse. Instead Stef, Rainey, Logic, Bob P etc. caught taxis into town (ahead of their 6pm train). We dropped Les at the station - he pointed out that this was the first lift I'd ever given him; he ferried me about for years before and after we finished school - ahead of check in. #hotelroomselfie 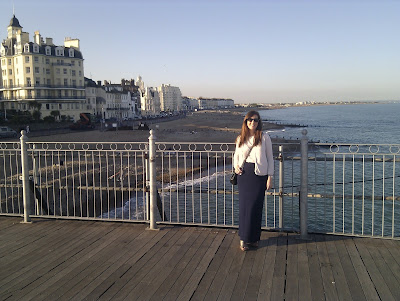 ^^^ A short walk along the promenade to the pier. We had a drink in the predictably naff bar at the end. Tattoos, shopmobility scooters and heavy accents (incl. Cockney and French) aplenty. 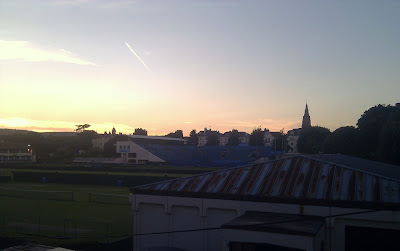 ^^^ We watched the sunset from the rear of the Buccaneer. Close to our hotel and highly recommended by my parents (my Mum has been a regular visitor to Eastbourne, over the years, to watch the international tennis tournament). The bespectacled barmaid took an age to extract the dregs from the Everards Tiger pump, filling up three quarters of a pint. "This OK?" she asked. "Only if you charge me for a half," I replied. "I can't do that," she claimed. "PINT of Doom Bar, then, please". I would fall asleep - during Match of the Day - after an Italian meal in a no frills restaurant on the bustling Carlisle Road, and another drink back in the (rather chaotic) hotel bar. A long and tiring day, but a good one. 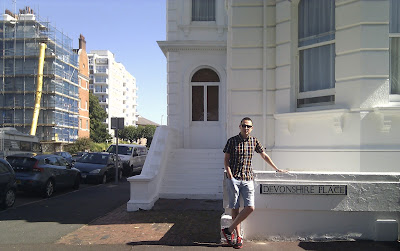 Email ThisBlogThis!Share to TwitterShare to FacebookShare to Pinterest
Labels: #dukeofdevonshire