Posted by Lenny Baryea at 23:00 No comments:

Email ThisBlogThis!Share to TwitterShare to FacebookShare to Pinterest
Labels: #imitationisflattery

Back online after a recent house move (sooo relieved that's over with!) and catching up on the non league football grapevine (I didn't even realise, until the following day, that Bristol Rovers had played Gateshead on the Friday night), I was intrigued to read about a 'series of tweets on the official Farnborough timeline which lacked class' (following Maidenhead's draw at Cherrywood Road).

I can only assume that they've since been removed, unless these are the 'offending' articles … 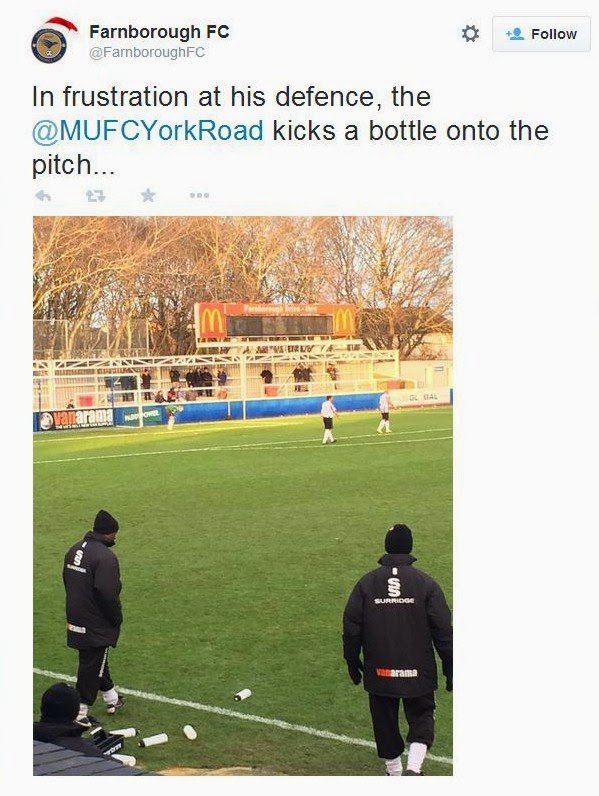 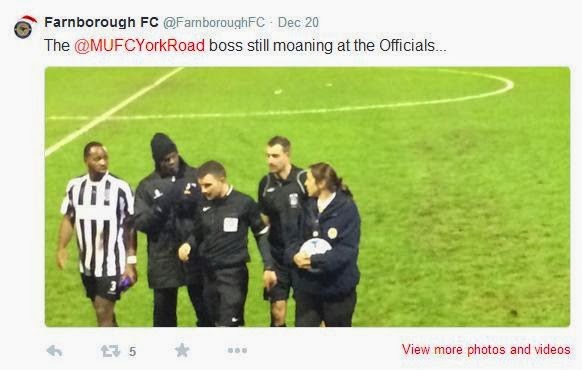 And certainly not as remarkable as Elvijs - MoM apparently - having a decent game!

I, for one, found this tweet much more interesting … 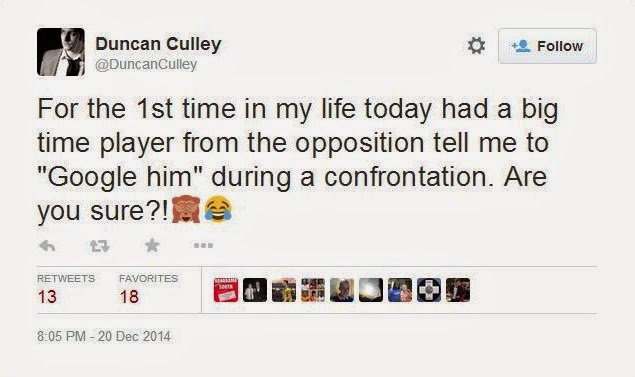 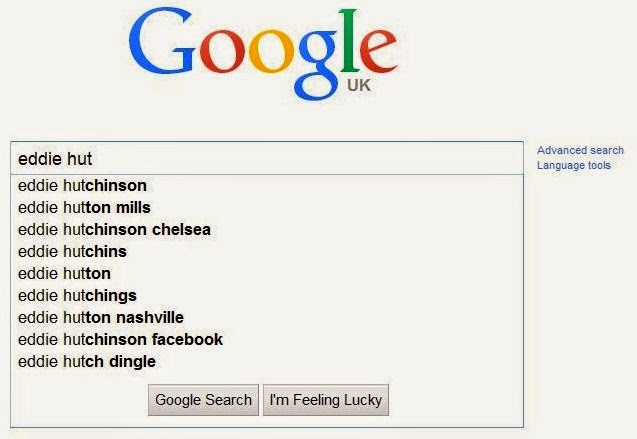 PS. Some quick observations re. the recent Educated Left Foot blog posts: (1) For 'stalwart', read 'sweary one-season wonder'. (2) I can only imagine what Steve J would make of Div 4, compared to the (relatively) rarefied atmosphere of the SPL!
Posted by Lenny Baryea at 22:30 No comments:

Drax: "I take maybe a bit of the blame" 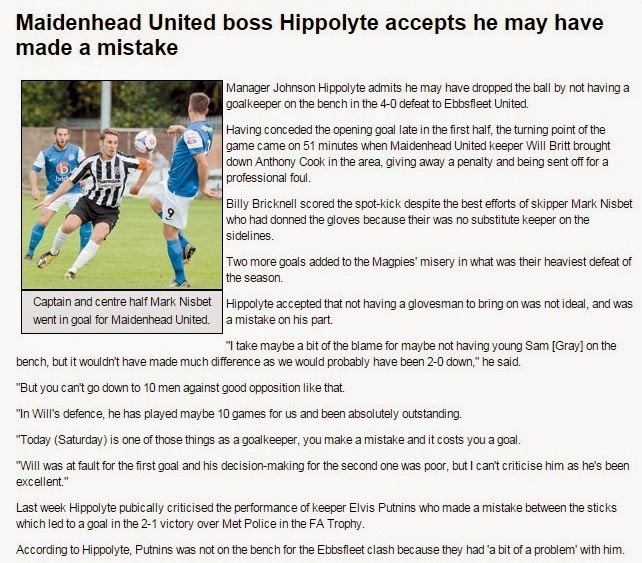 "Billy Bricknell scored the spot-kick despite the best efforts of skipper Mark Nisbet who had donned the gloves because their [sic] was no substitute keeper on the sidelines."

A Maidenhead fan who was at the game - and whom I was drinking with in a town centre pub on Saturday night - said, and I quote, 'my mother would've saved that penalty'.

"Two more goals added to the Magpies' misery in what was their heaviest defeat of the season."

Three consecutive league defeats (the last two being heavy ones; 4-0 at Bath and 0-4 against Ebbsfleet). No league win since 25th October; at home to relegation fodder Staines Town. Still, don't panic!

"I take maybe a bit of the blame for maybe not having young Sam [Gray] on the bench, but it wouldn't have made much difference as we would probably have been 2-0 down"

MAYBE a BIT of the blame??

Bristol Rovers found themselves in a similar situation, vs Wrexham, the other week; No 1 Steve Mildenhall having to go off injured, before halftime, without a direct replacement among the subs. Here's what Darrell Clarke, the Gas manager, subsequently said:

Drax might as well have done the usual and blamed bad luck/injuries/referees/financial constraints!

"But you can't go down to 10 men against good opposition like that."

The aforementioned Magpies fan - who, I reiterate, was at the game - remarked that Ebbsfleet were 'average'; not once making a concerted effort to attack Bobby Behzadi, out-of-position at left back, for example. And as for 'going down to 10 men' ... shouldn't we be used to that by now?!

"In Will's defence, he has played maybe 10 games for us and been absolutely outstanding."

A Bath City fan, writing on the Conference Forum the other week, mentioned that Britt was 'hopeless' against them, recently, at Twerton Park.

"Will was at fault for the first goal and his decision-making for the second one was poor, but I can't criticise him as he's been excellent."

Can't criticise him?? You just did! "We haven't had the rub of the green in recent matches ... but we're not making any excuses" :-)

"Last week Hippolyte pubically [sic] criticised the performance of keeper Elvis [sic] Putnins who made a mistake between the sticks which led to a goal in the 2-1 victory over Met Police in the FA Trophy. According to Hippolyte, Putnins was not on the bench for the Ebbsfleet clash because they had 'a bit of a problem' with him."

Bit of a problem? Yeah, he's not up to scratch; regularly throws them in.

It continues to bewilder me that Drax has never seemed to place much/any importance on the goalkeeper position; preferring to opt for the relatively useless (Delroy Preddie; Louis Wells; Elvijs Putnins) or the 'presumably cheap, unproven youngster on loan' (currently Britt; countless others including Jesse 'refused to be named as a substitute for Cambridge' Joronen and Jonathan 'recently benched by Welling' Henly) rather than a decent No 1 who might cost a bit but won't let you down (Chris Tardif; Steve Williams). Is it coincidence that the likes of Tardif and Williams - also Shane Gore and Billy Lumley - didn't last, at York Road, for much more than one season each?

Bring back Chico!
Posted by Lenny Baryea at 19:00 No comments: