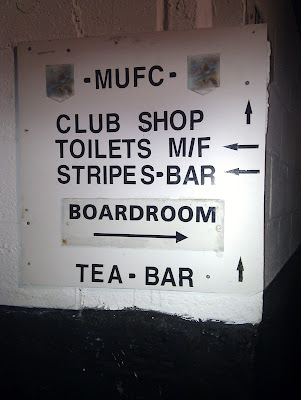 I could go to town on last night’s experience. Stick the boot in, Alex Wall style. I won’t as (a) it would give me little or no pleasure and (b) I can’t really be bothered. The latter is rather apt.

Some things that I wish had changed, haven’t:

Overpriced food; befuddled stewards; the Magpies conceding a far post header and a comedy own goal; ill-disciplined players (Messrs Wall and Hinds, unsurprisingly, the chief culprits); double standards as standard; a chronic lack of midfield creativity; the tannoy not working properly; a soulless, shabby and soon-empty Club Shack. I could go on ...

Some things that I wish hadn’t changed, have:

Prior to last night, a 2-1 win over Staines Town in April 2010 was the last game that I had attended at York Road (we weren’t allowed in for the 3-0 defeat against Basingrad, that followed in August). On paper it was a meaningless, end-of-season encounter between two mid-table teams. The Youth (and the not-so-youthful) were behind the goal in numbers, though, and in good voice. Indeed, the Bell End was absolutely rocking during the second half.

It was a legendary midweek match, IMO, with memorable moments including:
A St John’s Ambulance man with dwarfism truly excelling himself as a stretcher bearer at half-time - he had to hold his handle up above his head - as the Youth rather cruelly hummed the Oompa Loompa song

Darti Brown - “You’re sub, in a shitty team” - staying out-of-sight within the away dugout; not once venturing out to warm up despite our encouragement for him to do so

The standard of football wasn’t great (far from it). Nor was the attendance (271, similar to the 260 announced last night ... although the latter seemed about thirty or forty steep to me). Yet there was a sense of togetherness (sort of). Noise. Humour. Enjoyment. Good times to be had. In stark contrast, the only MUFC-affiliate inside York Road who could possibly feel contented, last night, was the person who gets to drive the shiny black 2011-plate Volkswagen Toureg parked close to the home dugout ... he/ she is obviously doing something right! ;-) 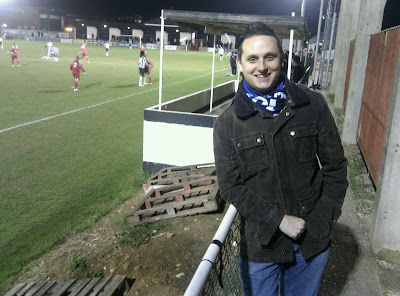 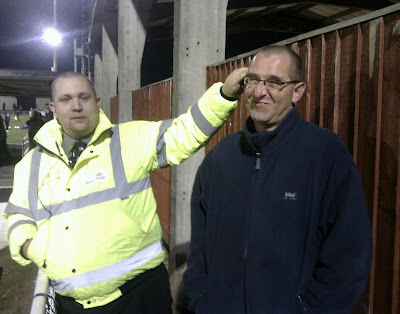 ^^^ I did tell him he should have worn a disguise

Macleod (M), Bobby P, Joe and I ended up chewin’ the fat in the Anchor until the small hours (I was the only one who had work the next day, more fool me!). The usual choons were played on the jukebox: 3712 - ‘Black & White Town’ by Doves - sounding more profound than ever ...


Macleod (M) mentioned to me that Craig very occasionally reads the Sunday Post, specifically to remind himself of why he doesn’t regularly read the Sunday Post.

The relevance of this story was crystal clear. 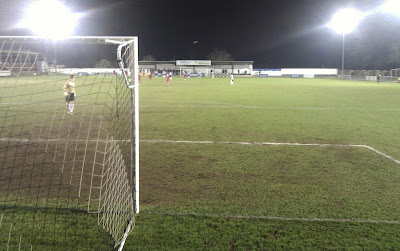 ^^^ The aftermath of Welling's fourth goal; a brilliant strike from Harry Baker. PA Coxy had to ask the keeper - who didn't have a save to make all night - which player had scored! And he (Coxy) was standing right next to me when he announced it ... and I still couldn't understand a word he said! :-) 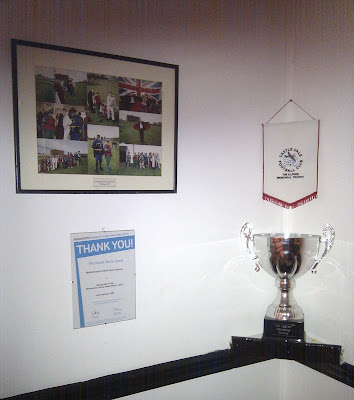 There was an interesting thread re pubs on the Bristol Rovers Alternative Forum this week (I would link to it, but you have to be a member to view). It started off with a question about the nearest beer joints to the proposed new UWE Stadium and soon turned into full blown debate about the decline of the Great British boozer.

It seems a lot of the Anchor-esque pubs (i.e. proper old-school boozers frequented by football fans and old blokes drinking from 'their' tankards in 'their' seat; as opposed to chain-pubs serving teenagers cheap alcopops and micro-waved meals; or over-priced glorified restaurants popular with your other half and her girlfriends) are closing down, in Bristol, as they are across the country.

The latest to go in Bristol is the Fellowship in Horfield, the local of some of my mates during their first year at University (they were rather callow back then, so only went in once). It is to become a Tesco Express - as if they're aren’t enough already - and apparently closed last Sunday, with over 300 crammed in for a farewell lock-in that ended at about 4AM on the Monday morning. This follows the notorious John Cabot undergoing the gastropub treatment ... indeed it even has has a children's playground in the garden these days!

Anyway, there were some superb anecdotes on the thread about various other gone-but-not-forgotten hell watering holes, and these prompted me to enter 'I remember the time' mode ...

I immediately thought of the afternoon when Gav Villa and I went into the Robin Hood's Retreat on Gloucester Road (when it was a 'run-down, spit-and-sawdust boozer', rather than a 'thriving neighbourhood hostelry with honest intentions') and some bloke in there was selling cheese that he'd just half-inched from the nearby supermarket!

Then there was the time, early on during the inaugural Conference South season in 2004/05, when a few of us (below - don't we look fresh-faced?!) were in Weston-super-Mare town centre trying to find somewhere to drink and watch the lunch-time TV kick-off prior to, it would transpire, Maidenhead's 2-1 defeat at Woodspring Stadium later that afternoon (I distinctly recall Craig O'Connor slapping Rob Saunders during the on-pitch post-match warm down!). Scouse Mick and Gav Chelse entered one pub, only to come straight back out before the rest of us had even made it over the threshold, because this particular place had no wallpaper and looked - and this was coming from Mick and Gav, don't forget - decidedly dodgy! :-O

This, in turn, reminds me of the time when, a couple of years later, Merthyr Tydfil fans - the majority of whom were presumably residents of the reigning 3rd worst place to live in the UK - refused to go into the Anchor because it looked 'too rough' :-) 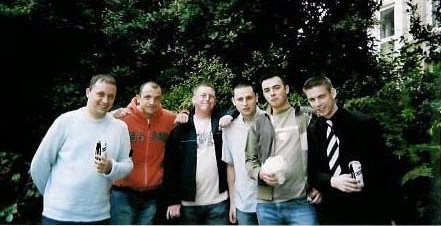 Other 'interesting' pubs that the KSG have visited in recent seasons include - off the top of my head - the Swan Hotel on Cinderford High Street (which didn't sell Guinness; in fact, they'd seemingly never even heard of Guinness!) and two places in Berwick-upon-Tweed - the White Horse (the  'review' here is pretty much spot on) and the King's Head (below) - which, essentially, were converted front rooms! 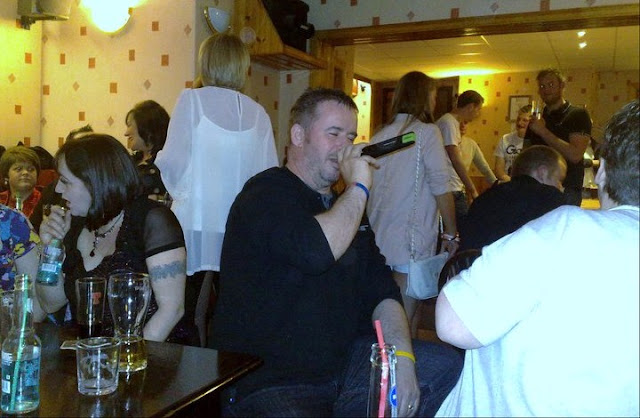 Given the choice - i.e. when I'm not with the wife! - I would much rather drink in the Nag's Head, or the Grapes, than in the Dog in the Pond. The sobering truth, though, is that in real life the Nag's Head would probably now be boarded-up and derelict, recently demolished to make way for 'affordable' housing, or re-invented as a gastropub called the Cockerel's Plumage/ something similarly ridiculous.

Saturday nights in the Anchor - post-match debate, banter and multiple jukebox plays (0408, 8815 etc.), in a pub packed with friends and family - is one of the things I miss the most, now that I no longer regularly attend MUFC Ltd games (for a time, the atmosphere in there, after home games, really would be buzzing). The way things are going - throughout the country as a whole - I might be missing the Anchor full stop, before too long... 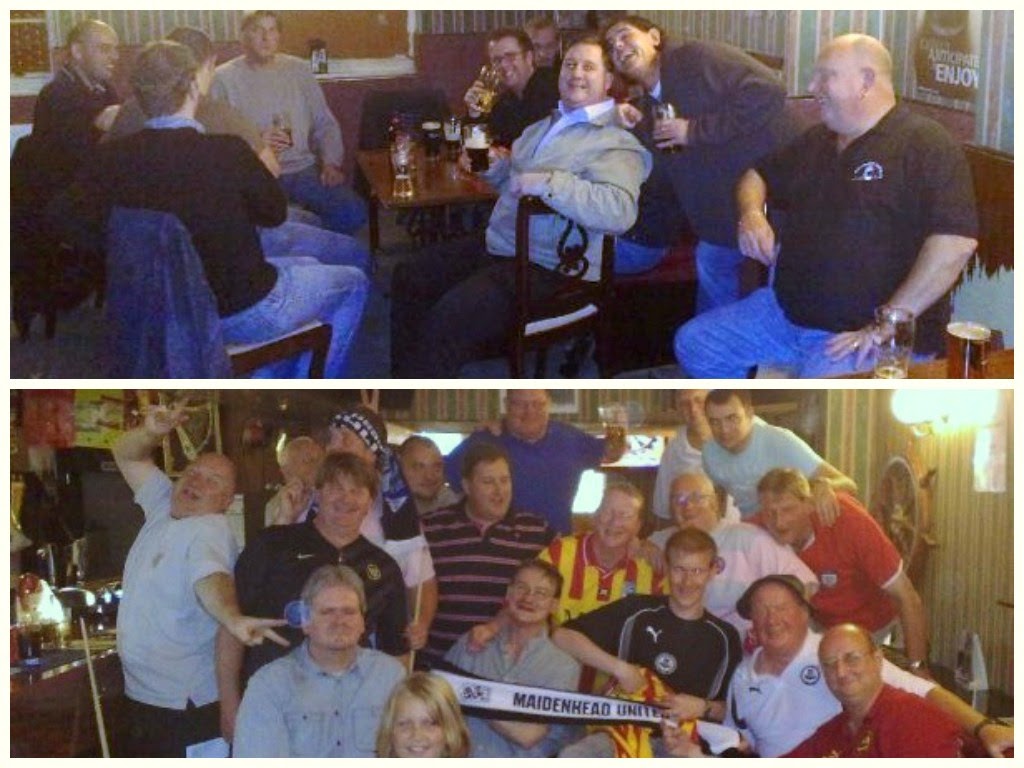 Email ThisBlogThis!Share to TwitterShare to FacebookShare to Pinterest
Labels: #savethegreatbritishboozer

Credit where it's due (even for Red Nev!)

Not unlike, I suspect, the majority of football fans up and down the country, I don't (or didn't?) much like Gary Neville. The charge sheet reads as follows:

I do think, however, that his co-commentary for Sky during last night's Arsenal v AC Milan game was refreshingly enthusiastic, largely cliché-free, insightful and entertaining (especially in comparison to the expert analysis dross often served up by the likes of  Andy Townsend  and Chris 'Pelanty' Waddle).
I particularly liked his "it's bingo time down Milan's left flank!" line from last night, after it had become obvious that Djamel Mesbah was out-of-his-depth (Neville had earlier expressed his doubts, on the basis that the Algerian had cost next-to-nothing, as a 27 year-old).
The fact that Neville repeatedly struggled to pronounce Zlatan Ibrahimovic's surname correctly - and has (apparently) never heard of  Guinea-Bissau  - are very minor gripes; his understanding of the game was, for my money, excellent (to be expected, I suppose, when you've made 400 appearances for one of the most successful managers of all-time and have, at least, half a brain cell). If Neville is ever inclined to take his UEFA coaching badges, then I wouldn't be surprised to see him make a good fist of emulating the achievements of his former Old Trafford boss.
A gain for the dugout would be a loss for the commentary box. 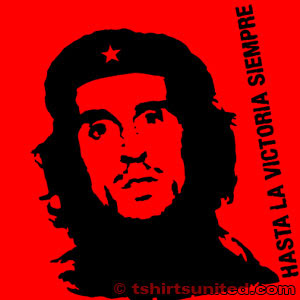 To continue the Red Nev love-in for just a while longer (don't worry, I'll have a shower as soon as I've finished writing this!), I read the other day (not in the Daily Star, but I couldn't find another link) that Beckham's Best Man was, in 2007, primarily responsible for the suggestion that all England players donate their match fees to charity, a gesture that continues to this day and has so far raised over £2M for good causes.
Once again, fair play.
Still can't forgive that moustache, though!


PS > Back to the Arsenal-Milan game, and there has been much talk about the Robin van Persie miss/Christian Abbiati save. Personally, I'd class it as a save, rather than a miss. Either way, I bet RVP wishes he'd blasted it now ...low and to the goalkeeper's left. Presumably he wasn't aware of Abbiati's political persuasion?!
Posted by Lenny Baryea at 20:45 No comments:

Whilst watching the Football League Show this morning - is it me, or does Steve Claridge always sound bored ... which is rather apt, bearing in mind that most of what he says his yawn-inducing waffle of the highest zzzzzz - I was reminded of Stevenage's upcoming FA Cup replay at Sh!te Hart Lane (apparently the 'Borough' haven't won since the original tie). As such, I suspect that they'll be plenty more press articles in the coming days highlighting the (relatively new) Stevenage manager's links to both T*ttenham Hotspur and Arsenal.

To Maidenhead United fans of a certain vintage, however, Gary Smith isn't remembered at York Road for being the son of Roger, or the only football manager (so far) to have won a trophy for Stan Kroenke. Instead he is (in)famous thanks to an unsavoury incident that occurred in the late 90s, when he was wearing the green and white of Aylesbury United. I'll leave others - Macleod (M)? - to fill-in the details of what prompted perhaps *the* iconic Born & Bred cover: 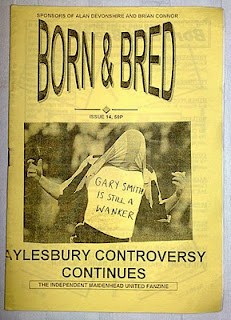 P.S. (and O/T) ~ Great result for Drax and the boyz yesterday. Well done all.
Posted by Lenny Baryea at 12:15 No comments: