If you build it, they will come

Ignore the fact that the above is a popular misquotation; the line from the Kevin Costner film - ‘Field of Dreams’ - is actually “if you build it, he will come” < insert obvious joke here >

Also ignore the fact that a more precise title for this post might be “If you build it, we will actually be able to get promoted from the division we are playing in ...which would render our participation in the competition far less frivolous than it has been” (Too verbose?)

Anyway, to the point - I was pleased to read last week that “MUFC are investigating replacing the existing stand on the railway side”

This very project was foremost in our thoughts (or my thoughts, at least) when the MUSA committee proposed, during a face-to-face meeting with the Chairman in the summer of 2009, that a certain percentage of the allocated playing budget instead be ring-fenced for ground improvements. The direct response was – and I quote – “I would rather spend money on players like Ashley Nicholls”

Three years down the line - with goodness knows how much cash spent (for what gain?), in the meantime, on the likes of Nicholls (decent enough player, don’t get me wrong) - and we’re finally at the  ‘investigating’ stage?! 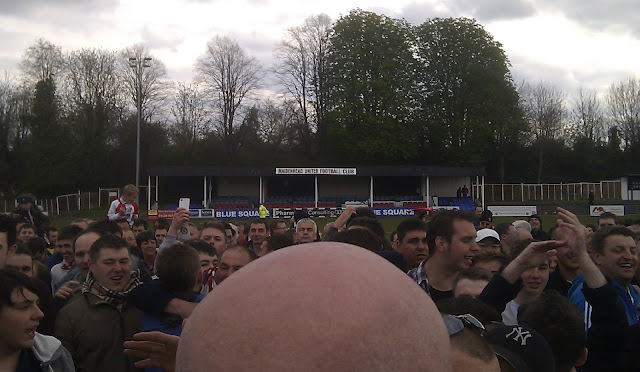 There was a time, not so long ago, when the club were ‘investigating’ moving from York Road (or paying some consultants to investigate, on their behalf).

More recently, the club were ‘investigating’ building an entirely new stand on the dugout-side of the ground (an artist’s impression - lacking perspective - was unveiled, to some fanfare, at a MUSA AGM ...in fact, I wouldn’t be surprised if it were still pinned-up on the notice board in Stripes!).

All the while, second-hand (or second-arse) seats were presumably available from (soon-to-be or recently demolished/renovated) stadiums in Swansea, Wolverhampton, Scotland and elsewhere.

Hey ho. Better late than never, as the saying goes, and credit where it’s due. I, for one, would be happy if the decrepit Railway-side Stand were ever replaced (properly) with a new one containing 500 shiny, black and white seats. Very happy. Far happier than if we were to sign Lionel Messi or (more flippantly, if that were possible?!) Richard Pacquette. And the seats wouldn’t even need to be shiny!

Forgive me, though, if I don’t hold my breath.

On the subject of ‘credit where it’s due’, I must also comment that - as per the recent photo albums uploaded to the Mothership - York Road is currently looking as smart as can be expected. Fair play to those individuals who – through their time and/or money - have made it so.

PS > Harrow Borough 1-3 Maidenhead United. Perhaps we’ve finally addressed our ‘lack of fitness’ issue?! At what price, though? Two training pitches at Bisham Abbey, two sessions a week. Cost per pitch for two hours? 150 quid. You do the math(s)...

Posted by Lenny Baryea at 19:00 No comments:

Maidenhead United FC boss Johnson 'Drax' Hippolyte is happy with how his side's pre-season campaign is going - even though they have yet to win a game.

So far this summer United have lost two and drawn one of their summer friendlies, that is in stark contrast to last year when they won all nine warm up games.

Drax admits he has been frustrated by injuries to certain players but he insists he has seen plenty of positive signs so far.

He said: "I'm fairly happy with how things are going, I think we've played well in patches".

Following their 3-1 defeat against Wimbledon last week, the Magpies were beaten 2-0 at Aylesbury on Saturday before drawing 1-1 with a Brentford Development XI on Tuesday night.

AFC Wimbledon's result in the game prior to playing us? Lost to Reading ... 7 (SEVEN) - nil.

Aylesbury's result in the game prior to playing us? Lost to Chinnor.

Brentford Development XI's result in the game prior to playing us? Lost to Banbury United.

Oh well, I'm sure Maidenhead's form will pick up when our lack of fitness has been sorted ;-)

The United boss said: "I spoke to Lee (Barney) on Tuesday and I said I'm expecting double figures from him this season".

Double figures in goals or appearances? And for which club?

It's difficult to tell, bearing in mind last off-season - 5th May 2011 to be precise - Drax was himself lamenting that Barney "hasn't had a lot of chances" (unsurprising, what with the likes of Cliff Akurang, Craig Faulconbridge, Jefferson Louis and Anthony Thomas having been brought in - by Drax - ahead of him).

The diminutive yet lightning-quick and highly-regarded young striker was then loaned out - again, by Drax - to Beaconsfield SYCOB, where he would spend the majority of last season ...

Another player who has impressed Drax during the early stages of pre-season is young centre back Devante McKain.

"If I had to pick my team for the first game of the season today, Devante would be starting," said the Magpies boss.

"He's the most mature 18-year-old I've seen, he's not fazed by anything. I've never seen a better defender at his age in the Conference South".

"I would have him over either of the Brentford centre halves I saw on Tuesday, all day long." 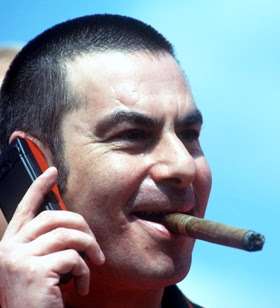 Good to see @therealdrax back, after a few weeks of inactivity –

Meanwhile, the winner of this year’s “Pacquette is just training with us, we can’t afford him” sweepstakes is the individual with ‘Thursday 19th July’.

Expect Costa Pac-Man to sign in December, if not before. 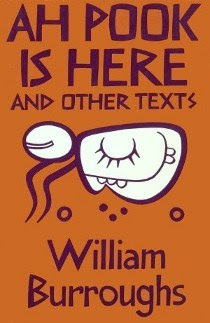 Michael Pook has signed a one-year contract at York Road.

On paper, it is a decent signing. I doubt we would have been relegated needed a reprieve last season had Pook (and/or Richard Pacquette) stayed longer than merely the Christmas/New Year period.

There is good reason why both were only here for a short period of time, however, as they were (understandably) looking to return to playing at the highest level possible.

That Pook has returned to York Road suggests to me either (a) he is no longer good enough for the Conference and/or (b) we made him an offer that he couldn’t refuse.

Hmmm ... gives him some security, you mean?

The contract signings, last summer, of Ashan Holgate and - if Drax were to be believed - Manny Williams also looked good on paper. So too, after a couple of games, did the commitment made to Chris Taylor.

How did those three deals turn out, though?

Forget the ‘lack of fitness’ BS, the collective failure (for varying reasons) of our three ‘big’ contract signings was perhaps the major reason, IMO, for our lamentable league position, come the end of the most recent campaign.

As aforementioned, Pook looks a good signing. But what if, like Taylor, he gets injured? What if, like Will Hendry, he fails to replicate his loan form after re-joining the club on a permanent basis?

IMO, the only players who should be given contracts at York Road are those promising youngsters for whom, it is hoped, we might one day expect a decent transfer fee (and possible sell-on clause).

As such, the likes of Devante McKain, Harry Pritchard, Reece Tison-Lascaris and Alex Wall, I can well understand.

In contrast, a year-long contract awarded to a 26 year-old (27 in October) who made the last of over 100 Football League appearances as recently as May 2011, is seemingly unwanted by Conference clubs, and (in all likelihood) lives a fair distance away?

A (presumably expensive) gamble. One that - if things don’t go according to plan - could see the Board requiring another ‘bit of a debrief’, come May 2013...

Hey ho, ‘glass half-full’ time; here’s hoping he does well, playing a significant part in helping the Magpies up the table and into play-off contention.

Who knows, perhaps one day the club might even decide it a good idea to spend money on installing the required amount of seats, allowing us to actually compete in the play-offs, if we were ever to reach them...

Posted by Lenny Baryea at 20:30 No comments: