Ranking my costumes (so far) 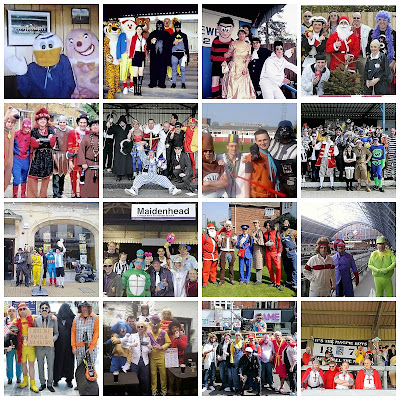 Saturday 18th April 2020 at Chorley will be the twentieth instalment of Fancy Dresslemania. Those who have taken part in all of them so far - namely me, Macleod (C), Macleod (M) and Willie T - refer to ourselves, rather smugly, as 'the Fab Four'. Macleod (C) and I - the two who will often spend months, sometimes years, planning costumes in advance - have taken the music analogy still further by comparing our 'Fancy Dresslemania journey' to that of a superstar rock group: our early efforts were formative but not the best, then we found our feet as 'the movement' took off, now we have nothing left to prove and so can veer between feelings of apathy ("release any old shite - the fans will lap it up regardless") and inspiration (more indulgent, less commercial, critically-acclaimed stuff).

With the 20th anniversary fast approaching - and having read a 2013 article, recently shared on social media, listing '30 excellent songs with (mostly unnecessary) parentheses in their titles' (stretching the music analogy to breaking point now!) - I thought that I'd take the time to rank my best Fancy Dresslemania costumes. (Perhaps a series, with subsequent entries from the Macleods and even Willie? That'd be good, but I'd advise against the collective holding of breath!) I've tried to separate the costume from the day itself, so to speak, but that's not always easy. Anyway, in reverse order, here goes … 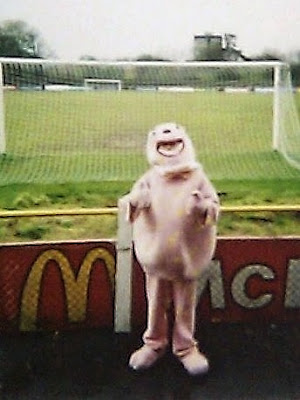 ^^^ Continuing with the music analogy (last one, I promise!), this was our 'David Bowie'. In our defence, as previously mentioned on the blog: 'We used a hire shop in Langley in those days. Fancy Dress and internet shopping were nowhere near as commonplace as they are now'. 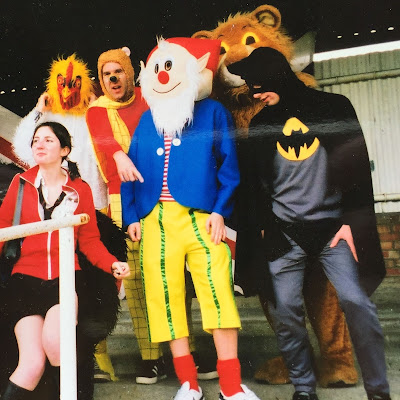 ^^^ I've a fondness for this costume - Fancy Dresslemania came alive at Grays; it's still the only occasion that my wife has taken part - but face covering, we had yet to figure out, is a no-no. 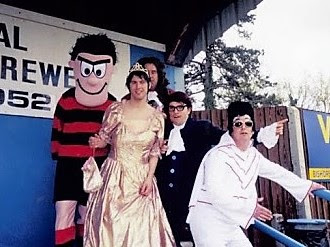 ^^^ Another covering of the face, although a decent character and costume. 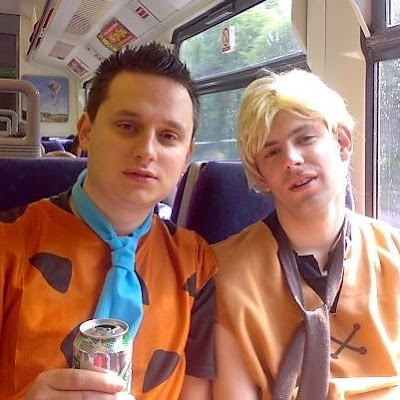 ^^^ An off-the-peg costume of poor quality; the plastic club was a decent accessory, though, and at least Fred had Barney Rubble for company. 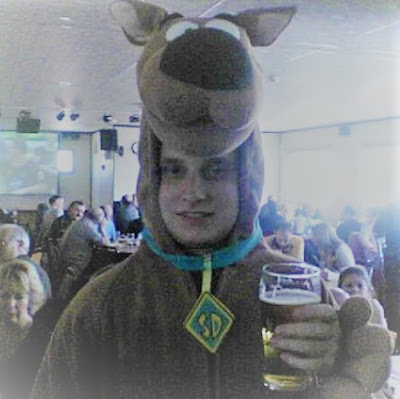 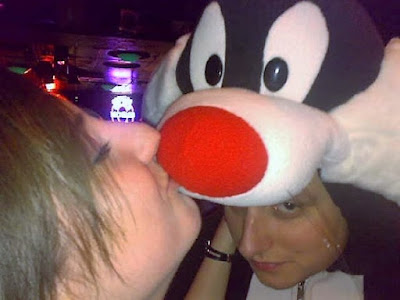 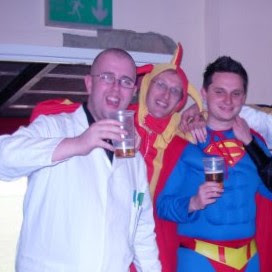 ^^^ Too commonplace nowadays (it wasn't at the time); popular in the Smoke, though, with both males (or one, in particular!) and females. 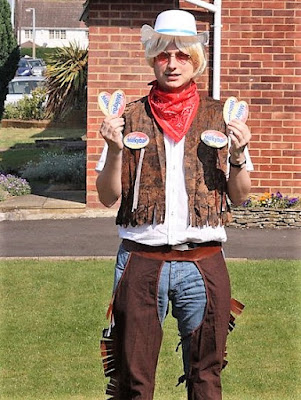 ^^^ Better than I remembered, looking back at Scouse Mick's photos on Facebook, but (1.) probably not a character that I'd choose again, with the benefit of hindsight, and (2.) costume not as polished as it could've been. 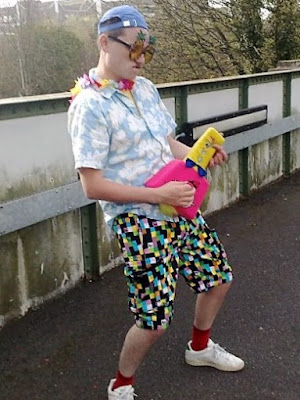 ^^^ I still occasionally don the swimming shorts on holiday - much to my wife's dismay - and Pinky Punky was a superb accessory (I love the post-match photo of Jack Bradshaw holding it aloft; while the game of Mallett's Mallett, with two policemen at Reading station, is one of my favourite Dresslemania anecdotes) - but not a costume that I'd wear again. FUN FACT: the real-life Timmy Mallett actually posted a snide comment on here, back in 2013, after a perceived slight of his beloved Oxford United! :-P 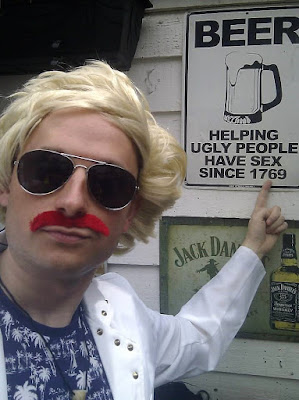 ^^^ Some nice details - e.g. the bandaged hand, laminated Celebrity Juice question cards, ginger moustache - and I liked the white jacket, but the first time that I'd been 'doubled' (there'd been two Bananamans at FDVIII; two Ali Gs at FDIX; two Noddy Holders at FDXIII) and I think that LCG Dave's 'Keith' was arguably better than mine. FUN FACT: both of us had unknowingly bought the same Primark t-shirt, which - again, much to my wife's dismay - I have subsequently worn on holiday! 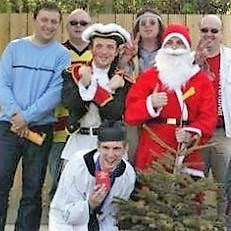 ^^^ A second-hand purchase from a fancy dress shop in Bristol city centre - the (felt) trousers were wearing very thin at the crotch - this costume is elevated in the list by a legendary accessory: 'It was a scorching hot April day yet, in the pub garden before the game, we noticed a Ken Bates-lookalike throwing out a Christmas tree - complete with all of its pines - from the large house opposite. I asked if I could have it, as an added accessory to my costume, and he obliged. There were no objections to me taking the tree into the ground;indeed, the stewards opened gates specially, as I couldn't fit it through the turnstiles! And to think that some ground staff object to flags without fire safety certificates!' 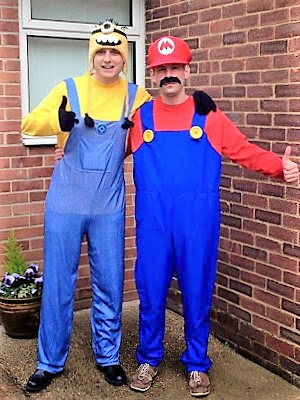 ^^^ A decent, comfortable, DIY job; I particularly liked the hat and still wear the black gloves on early morning runs. 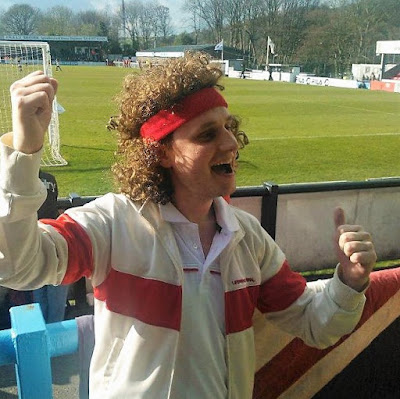 ^^^ Another decent, comfortable, DIY job; I particularly liked the wig, while the accessory - a tennis racket that my mother-in-law had played with as a youngster - had the Smokey's bouncers in absolute hysterics when I was compelled to hand it in upon entry to the club ("look after that, it's the one I used to win Wimbledon in '81"). Minus points, though, for the perceived similarity to the 118 118 men. 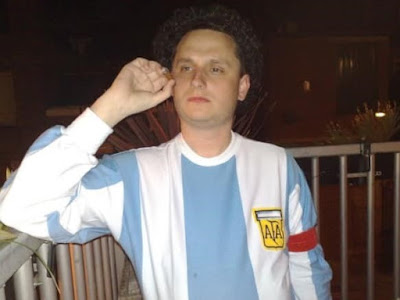 ^^^ My first DIY attempt turned out to be my best costume up to this point. FUN FACT: I was once offered a princely sum, by an antiques shop owner, for the retro Argentina shirt - which, since purchase, has been a constant staple in my everyday wardrobe (I'm gutted that my youngest, pulling at it, has recently ruined the elasticity of the collar) - whilst buying an accessory for FDXVII … 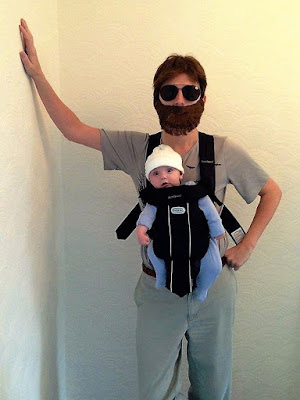 ^^^ An off-the-peg costume, admittedly, but an actual human (my first born) as an accessory - at least for some of the pre-travel photos - more than made up for that! Those who 'got it' were impressed and I was actually pleasantly surprised that 'fake Baby Carlos' was still in my possession, come the morning after, as he/ it received a lot of motherly attention during our night out on the (Weston) tiles. 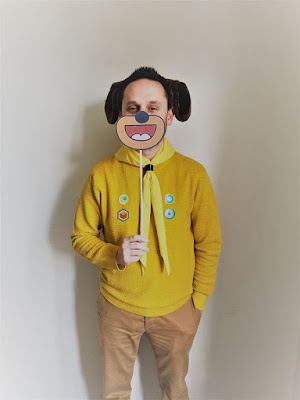 ^^^ I'm a big fan of Hey Duggee on CBeebies (not unlike the Chinese) and a big fan of this costume: relatively original, comfortable, featuring a reusable item (my wife now wears the mustard-coloured jumper), some 'arts & crafts' and good attention to detail (e.g. the badges). Not everybody knew who it was, but those who did - i.e. those with kids of their own/ nieces/ nephews - loved it. A pity that I didn't hold off for a year, though, as my youngest is now even more of a Hey Duggee fan than his older brother was; I might even have to dig out the component parts from the loft - yes, I do have a fancy dress box up there! - for his birthday party this summer. 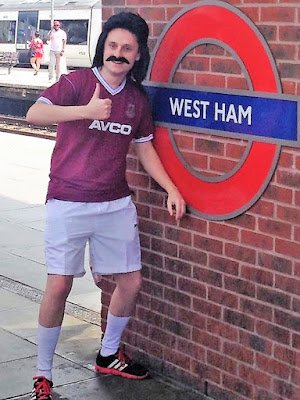 ^^^ This costume went down an absolute treat; little wonder that it was subsequently featured in the national press! A big Fancy Dresslemania regret is that I didn't get a photo with the man himself. Apparently, he suggested one at half-time, but I was too busy drinking in the bar! I thought that we'd get one after the game, but the team coach left almost immediately after the final whistle. What a wally! (Me, not Dev!) FUN FACT: This costume was a last-minute change of heart; I had originally planned to go as an entirely different character, in a costume that will probably never see the light of day … 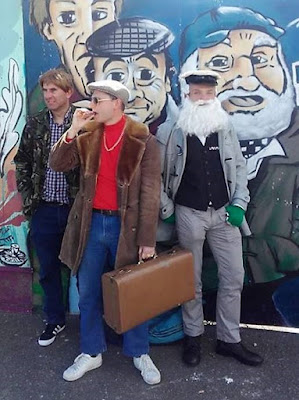 ^^^ As a huge fan of both Maidenhead United and Only Fools & Horses, the Magpies winning the Conference South title at Margate (the venue, of course, for the Jolly Boys' Outing), whilst I lead a conga around the ground dressed as Del Boy, is a moment that will likely never be bettered. The above photo of the Trotters, stood in front of an Only Fools & Horses mural, close to Margate station, found its way onto a popular Away Days page on Facebook and received literally hundreds of Likes and Comments. The one (slightly) negative remark? "Del Boy isn't fat enough". I'll take that! It was disappointing that 'my Only Fools & Horses 'In Your Pocket' voice box - which had been delighting me, and unsuspecting members of the public, if not my travelling companions - ran out of juice, shortly after the final whistle. Rodney mentioned that a Fancy Dresser of my experience should've had a miniature screwdriver and spare battery to hand. He had a point'. All told, though, this costume - complete with a host of decent accessories, not least the suitcase (referenced further up this post [#6] and used on the day to carry the flags) - was undoubtedly lovely jubbly. 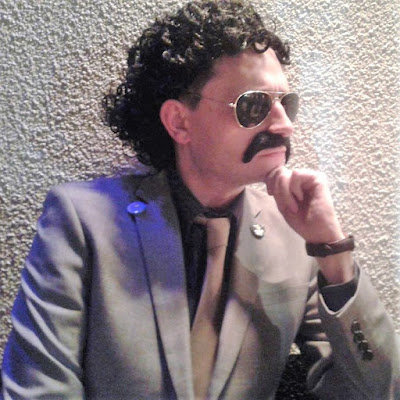 ^^^ This ticked all of the boxes: an accurate, relatively original, DIY homage to a recognisable and popular character; comfortable to wear, easily put together, with accessories (USA flag), 'arts & crafts' (cardboard sign) and good attention to detail (Kazakhstan flag pin badge). 'King in the castle,' as the man himself would say, and so it might well make a re-appearance for the 25th-anniversary celebrations. Yep, you've got at least another five years of these fancy dress- related posts!

Posted by Lenny Baryea at 21:00 No comments: