Following our opening-day ejections at Ebbsfleet - and MUFC Ltd's all-too-predictable draconian and overblown reaction to them - the upcoming Hellenic League Reserve Division One fixtures of the newly-reformed Maidenhead United Reserves were heavily scrutinised for possible train away days as early as the end of August. While places such as Highworth, Fairford, Wantage and Wootton Bassett immediately intrigued, closer inspection revealed that - even if the dates we were due to play them were convenient for everyone - Dr Richard Beeching's infamous cuts of the 1960s meant that we wouldn't be journeying to them by train (if at all). The fact that Cirencester Town away was scheduled for a Tuesday night left only one stand-out fixture - Cheltenham Saracens Reserves on Saturday 20th November. It was duly inked in.

It wasn't until early November that I was reminded to look into train times and, to my horror, it soon became apparent that the two words KSG Away Day veterans dread like no others - namely 'rail' and 'replacement' - reared their ugly heads on the aforementioned Saturday, with buses running between Reading and Swindon which, unfortunately for us, was smack bang in the middle of our intended route. A good hour or so was spent looking into alternatives and, after much deliberation over the coming days, we decided upon giving the buses a wide berth and travelling to Cheltenham via Worcester Shrub Hill. It would mean spending little or no time in Cheltenham on the way back (and being sent more or less an entire 'pack of cards'-worth of tickets), but re-familiarising ourselves with a couple of Worcester pubs (and attempting, at the third time of asking, to have a drink in The Horn & Trumpet - pub #8 on the Worcester City pub crawl - without getting refused entry/thrown out) was but a small price to pay. 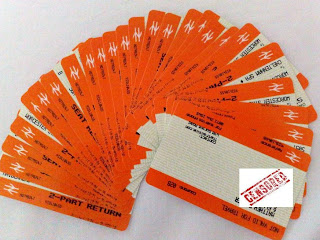 Due to a family illness, Steve H wasn't able to make it on the day and so there were only three of us on the 10:25 from Maidenhead (which meant that our crate of Guinness once again had it's own pre-booked seat!). After my now-customary chicken sandwich and pint of milk at the Reading changeover, it soon became clear that the train we were on was experiencing intermittent engine problems, ensuring frequent stops or go-slows as we attempted to navigate the rolling Cotswold hills. After an entertaining and surreal conversation with an eccentric photographer from Evesham called John (who was en route, flowers in hand, to meet a 'lady friend' in Worcester and introduced himself to us with a masturbation joke after over-hearing one of the Macleods – possibly Callum – describe Alan Sugar as a merchant banker) we finally arrived late at Worcester Shrub Hill. So late, in fact, that our connection had been well and truly missed and the next train to Cheltenham wasn't until after kick-off. So late that the rail company felt compelled to commandeer a taxi (or seven-seater scum bus, in GLC parlance) to take us and the four other travellers (including an Irishman in clogs and a blond-haired public schoolboy running late for a rugby game), in the same predicament, to Cheltenham. 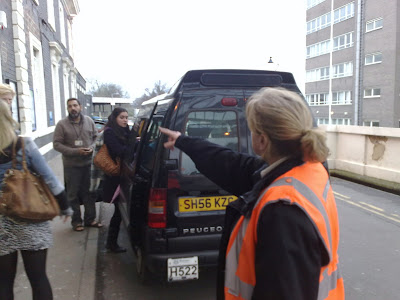 After a drop-off in Ashchurch-for-Tewkesbury (not Pont – see 'Dragon Cars' by Goldie Lookin' Chain to make sense of this reference), the KSG were the second group to disembark the taxi after Macleod (M) was able to determine that the main road we were on was the very same as that featured on his printed map of ground directions. Sure enough, the floodlights of Petersfield Park, home of Cheltenham Saracens FC, were in view (as well as a giant KFC and other multi-national outlets typical of out-of-town retail parks) as we exited the black cab. After crossing the busy road and meandering through the outskirts of a run-down council estate that resembled something from Channel 4's Shameless (a quad bike driven by a multi-ear-ringed, tracksuit-wearing twenty-something - with a toddler clinging to his back - roared past us at one stage, and it transpired that there was a muddy BMX bike track right next to the football stadium) we arrived at the entrance to the football club (or, more accurately, the ground - the Saracens' clubhouse was miles away, literally, in the town centre).

"Do we have to pay to get in?" was the question at this point.

"No" was the answer. 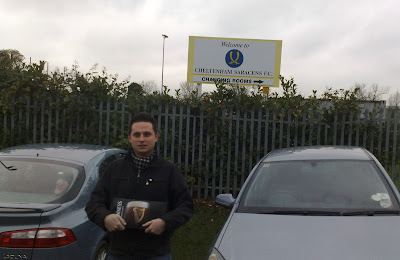 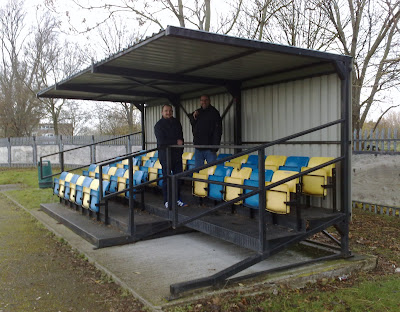 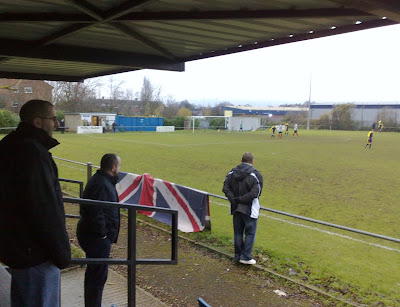 Unlike that fateful Saturday in August, on this occasion we did take alcohol into the ground (and further ground regulations were later breached when we crossed the pitch at halftime - no swearing or threatening behaviour though...then again, there wasn't at Ebbsfleet either!) and we readied ourselves for kick-off by finishing the crate of Guinness (I needed a drink, after learning of T*ttenham's sadly inevitable comeback at New Arsenal Stadium) whilst sitting in the small, broken-seated stand (at least the seats were in the correct colours, however, unlike those at York Road!). The weather was gloomy, the pitch was terrible ("worse than Oaken Grove" was Murdo's accurate description), the crowd virtually non-existent (aside from a handful of home side volunteers and a couple of Dad's following the youthful MUFC team, we were the only ones there) whilst the game, it was to transpire, was entertaining; my brief, post-match report on the MUFC Ltd forum read as follows:

The young United side were clearly the more technically gifted but, after we took an early lead and then missed a penalty, the home team fought their way back into it (almost literally - some of their tackling was decidedly x-rated) and held a 2-1 lead at one stage.

United’s class told in the end and a couple of stunning strikes in the second half sealed the win, much to the delight of the players, the management and the travelling support.

Indiscipline crept in at times (perhaps they’ve seen the odd first team game?) and a couple of experienced older heads are required, methinks, to nurture talents such as the slight, right-footed(?) left back (Josh Waldron?), the James Milner-esque Ryan Jones, the Theo Walcott-clone Jordan Brown, the "more-stepovers-than-Ronaldo" No 10 and the ball-playing No 4, amongst others.

By far the best player on the pitch, however, was the Saracens’ No 10 (Sonnie Burrows); he was excellent and should have the scouts flocking to Petersfield Park. 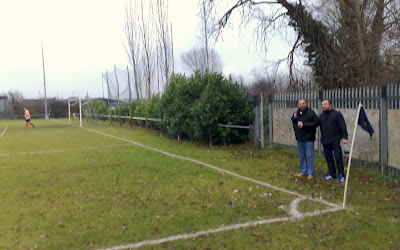 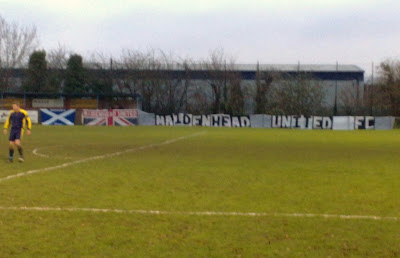 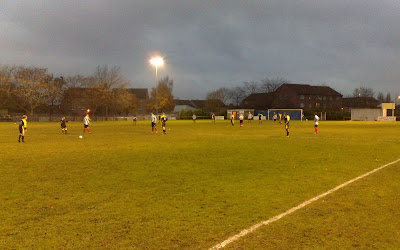 The players seemed to appreciate the support; without prompting and to a man, clapping us from the centre circle at the final whistle. Manager Sam Lock and coach Nigel Wright (who had, weeks before in Noctor's, expressed his disbelief when we had told him of our plan to travel to Cheltenham) came over for a chat and Sam asked after the MUFC Ltd score. A quick check on Steve J's Twitter account (only the second most popular MUFC Twitter feed on the interweb, and by no means the original...) confirmed that they had lost 4-2, at home to lowly Uxbridge (managed by Tony Choules and, apparently, 8-1 also-rans according to the bookies), in the FA Trophy. One of the laziest players I’ve ever seen wear a Maidenhead United shirt - Dean 'Work rate' Clark - scoring twice for a side that, aside from a 4-2 win over Burnham immediately prior to the York Road game, had lost 6-1 at home to Daventry Town, 6-2 at Staines Town (in the County Cup) and 3-0 at Woodford United in other matches during the month of November. Ouch!

As aforementioned, the Cheltenham Saracens' clubhouse was away from the ground and so, as we had a train to catch anyway, we politely declined Coach Wright's offer of a post-match drink and instead started the 30-minute walk to the station. After a quick stop-off for food at Popeye's fish and chip shop (recommended), we made the 17:48 to Worcester with seconds to spare.

The plan was for a couple of hours in and around Foregate Street before catching the 20:15 train, via Shrub Hill, back to Maidenhead. After a drink in the The Cricketers (usually pub #7 on the Worcester City pub crawl), a couple in The Horn & Trumpet (first time in three goes that we hadn't been refused entry/thrown out!) and a quick stop-off at the Tesco Express next to the station for supplies (pasties and a £2.60 440ml bottle of Jacques each) we were back at the relevant platform in good time for the train...that never came! It transpired that First Great Western HQ had made the genius decision not to stop at Foregate Street (and, crucially, not to tell anyone!), which left us with literally minutes to get to Shrub Hill. We didn't even try (to rush and make our intended train), instead taking our time walking to the other Worcester station, stopping en route to purchase a bottle of cheap Latvian vodka (Murdo obviously wasn't sure, at this point, about the Jacques!).

Passing what seemed like pub after pub, after pub, after pub, after pub (Worcester must surely rank highly in the 'pub per capita' league table of reasonably-sized towns/cities) we completed a full circle by reaching the station we had arrived late at, and caught a taxi from, earlier in the day (Callum was to point out a tent, bizarrely pitched under tree on a patch of grass out front, that he had apparently noticed, but not mentioned, first time around). It transpired we had quite a wait for the next train, time we would pass while undertaking our very best teenage Chav impressions; listening to music (the Chain, of course) on a mobile phone whilst swigging from bottles of cider. 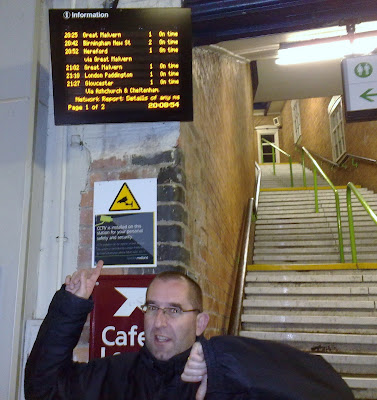 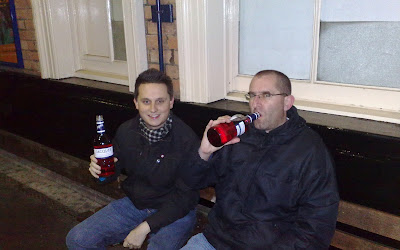 The train, when it arrived, was deserted. So much so that the ticket inspector was only too happy to chat to us (primarily about the impending major redevelopment at Reading; apparently it is to be turned, in the New Year, into a 16-platform super-station) before we stopped at Oxford and the masses descended, several complimenting us on the nearly-completely demolished array of drinks. After changing again at Reading we found ourselves on the same local train as an ex-work colleague of mine, who plays for Holyport. An experienced Hellenic League campaigner, he had barely heard of Cheltenham Saracens, let alone their Reserves, and so was mightily impressed/fearful for our sanity after learning of our journey and - after making it clear that he wasn't, contrary to my understanding, the older brother of one of Maidenhead United Reserves' more accomplished performers on the day - implored us to attend a Holyport (or Maidenhead North End, as we like to refer to them) game before the season is out. Travelling several hours on various trains to watch a youthful Maidenhead United Reserves side play out an eight-goal thriller on a muddy pitch in front of tens of people is one thing. Holyport? Not gonna happen! 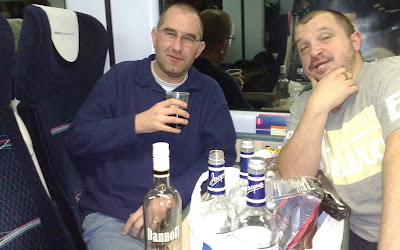