I've mentioned before that I think Drax is - fundamentally - a decent manager.

The bottom line, however, is that we're now staring relegation in the face and are surely odds on to start next season in the Southern league (where he found us) as Hayes & Yeading (his former club, sort of) - in all likelihood still in the Conference South - make themselves at home on the Bell End every other week.

Time for a few home truths, esp. bearing in mind six successive defeats (five at home, all to last minute goals, with the other loss being a 6-1 hammering at Bromley) and the usual guff in the local rag ... 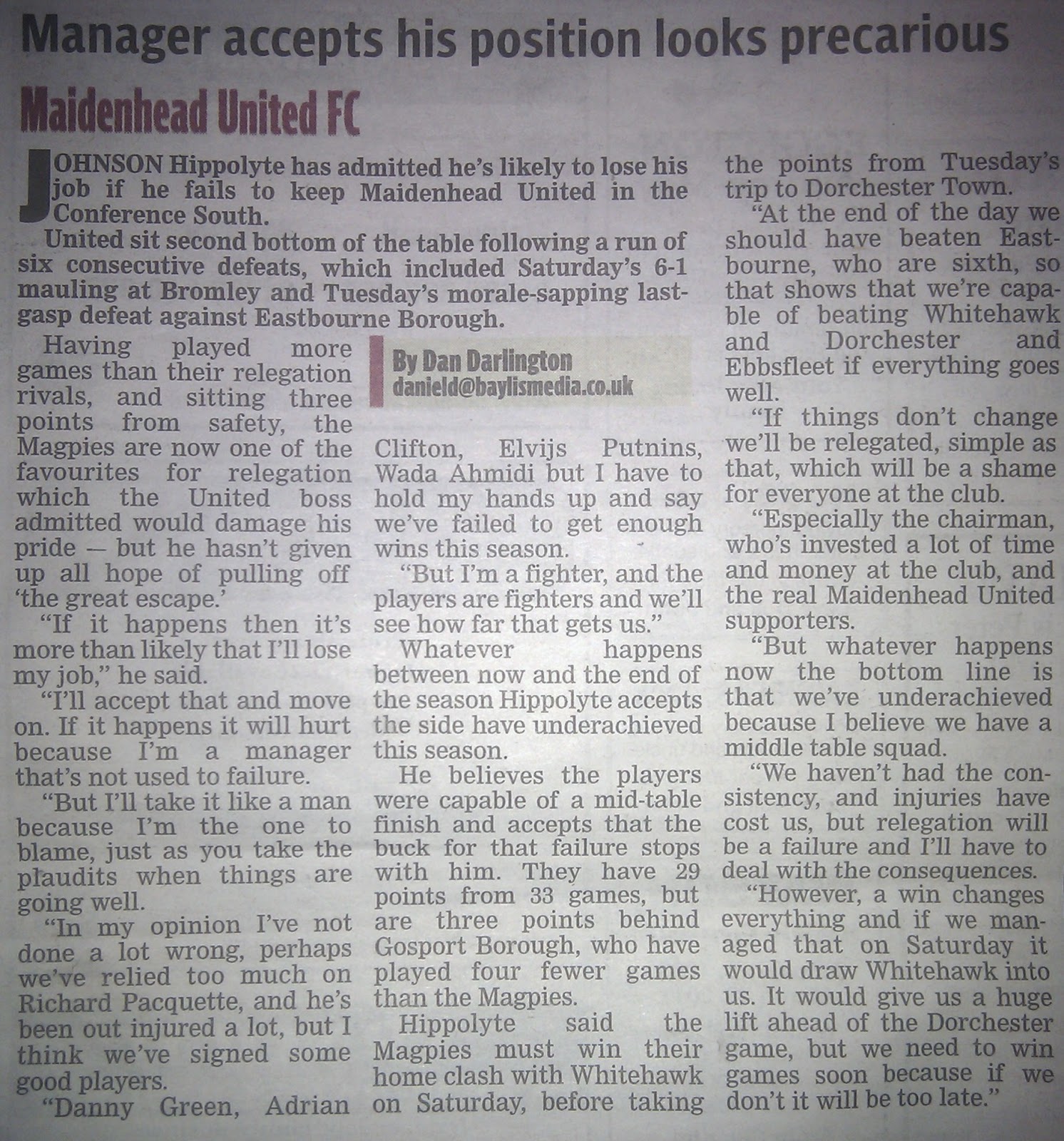 "I'm a manager that's not used to failure"

"In my opinion I've not done a lot wrong"

"Injuries have cost us"

"A win changes everything" 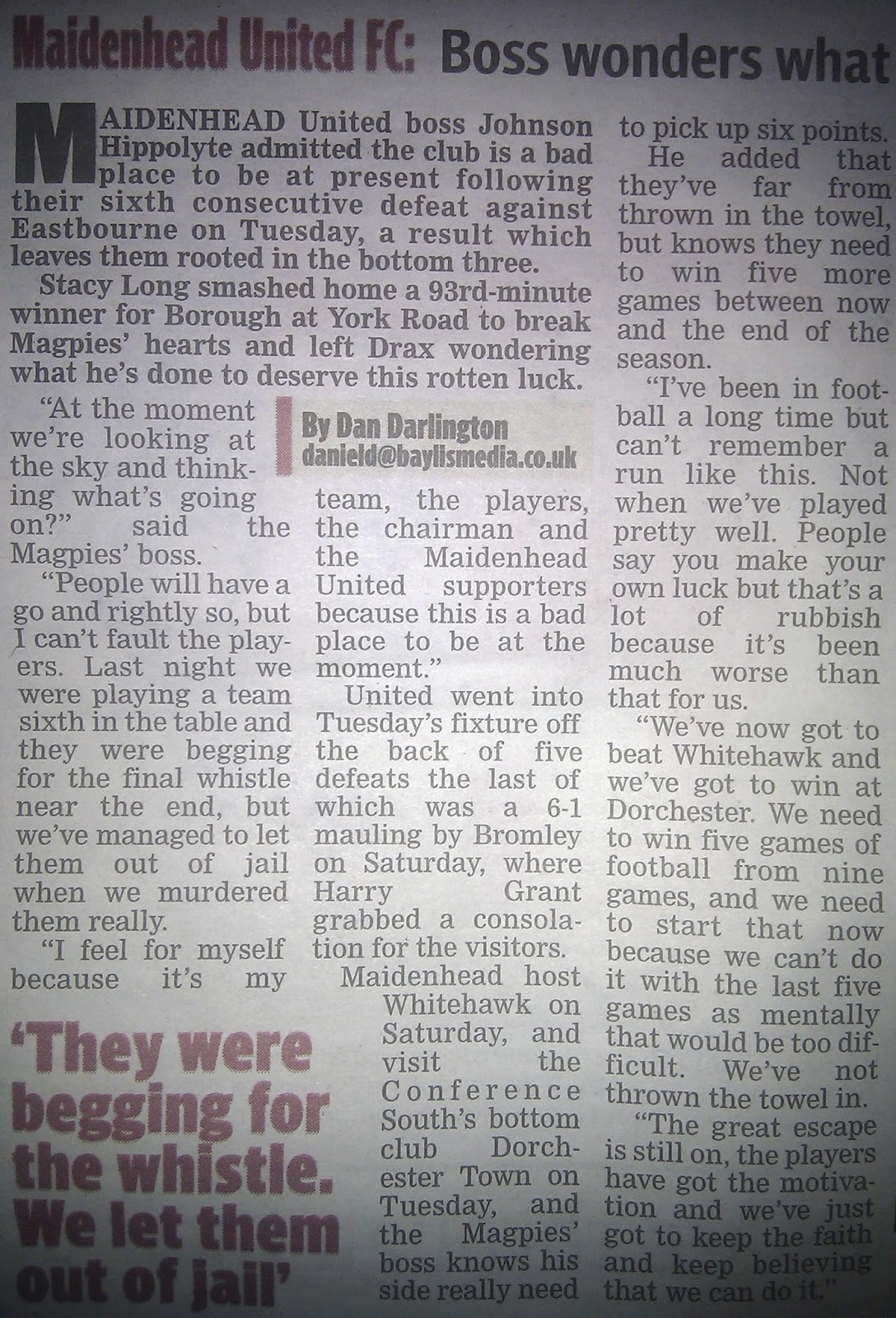 "We're looking at the sky and thinking what's going on?"

"They (Eastbourne) were begging for the final whistle near the end"

"We murdered them really"

"The great escape is still on"

PS. Anyone wondering about the blog post title obviously missed 'Inside Boodles', last Sunday, on Channel 4. TBF, PG didn't say much anything (while that sunshine yellow dress, IMO, rather suited UL).
Posted by Lenny Baryea at 00:10 No comments:

Email ThisBlogThis!Share to TwitterShare to FacebookShare to Pinterest
Labels: #pray4drax

I've long suspected that Drax is in on the joke.

Proof, last week, that the Advertiser is too? 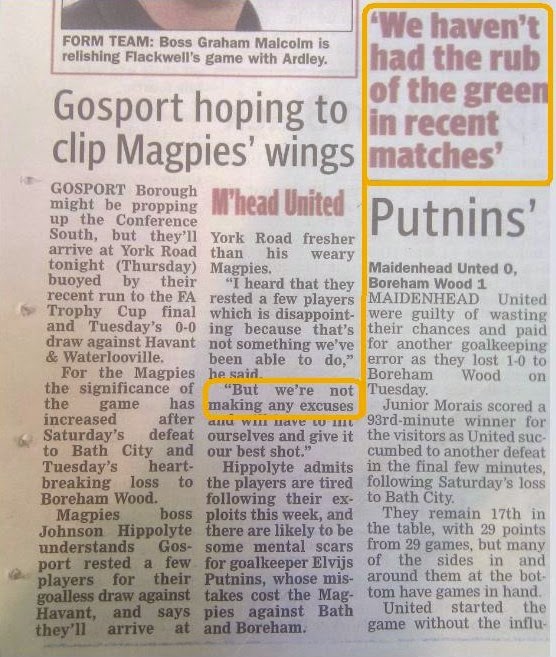 We were also informed 'Griffin encouraged by FA's stance on 3G pitches':

Define 'long-time' … and please explain how the 'it comes down to when are the FA going to allow us' comment is relevant, bearing in mind that others (Durham, Maidstone, Merthyr) already have one??

(In all seriousness, click here for further reading on this intriguing topic)

I initially misread the above article's final sentence, incidentally, as follows:

An easy mistake to make, of course, as the current five-year plan isn't the first.

I seem to recall Educated Left Foot revealing an outline of the previous one, following a meeting he'd had with PG, shortly after Pharmalink assumed control of the club back in 2006.

Has anyone got a transcript? (Club Shop Guy?)

PS. Someone recently asked me - with a smile, perhaps understandably, etched upon their face - why I had yet to comment, on the blog, re. the Railway side Stand coming down. Seeing the photos, earlier in the month, actually evoked in me a tinge of nostalgia and prompted the following Tweet: 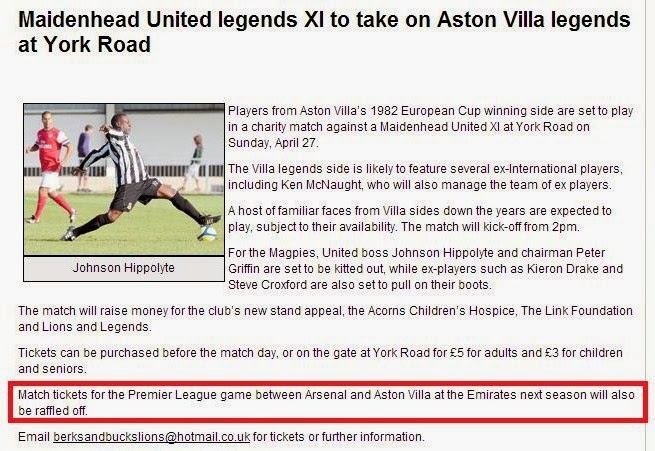 Regarding the prize, highlighted above, what happens if Villa are relegated??

Even allowing for today's result, it's not beyond the realms of possibility.

They are, after all, managed by a bloke who has previously described W@nky Wanderers as a 'great club'