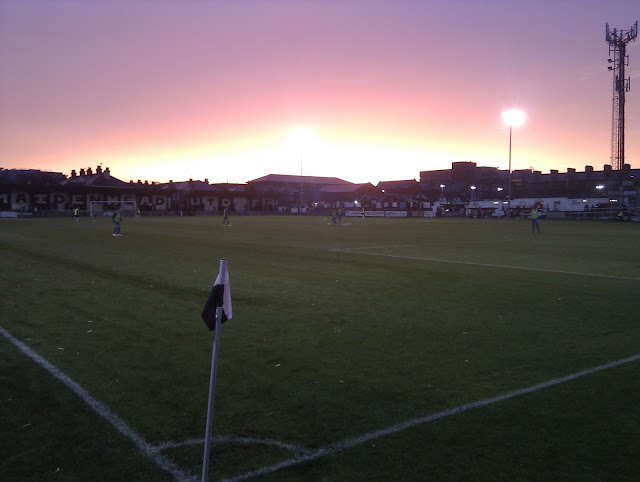 I wasn't planning on writing a blog post, but several people suggested that the performance deserved one. A bit of a cheat, this, but hey ho ...

Black+White v Yellow+Blue tonight. I'm reliably informed that Mhead are in the Black+White. Can never be too sure. 1 up. Another Wright pen.
— GMOSC (@gomadstopcaring) August 11, 2015


^^^ Have I mentioned my dislike for our Slough Town-esque yellow and blue away kit? I have, many times? Good.


^^^ Ooh, and that's a bad miss! (Reid's was a bad one; an absolute sitter more akin to when Rocky 'blasted over from six yards with the goal at his mercy' vs WSM at York Road in December 2008, but I'll never tire of linking to the short video of that hilarious free kick vs Thurrock.)

Stortfort keeper having an Elvijs. He spills and Reid makes no mistake this time. 2-0 at the break.
— GMOSC (@gomadstopcaring) August 11, 2015


^^^ It was slippery but, regardless, a night that Elvijs Putnins Tom Lovelock will want to forget.


^^^ Me, Mr Logic, Payney, Rainey, Scouse Mick, Steve H, Stuart; we all hurried across, during the interval, to see if the rumours were true. And they were. Real ales - and other refreshments - are now sold on the railwayside of the ground! Disabled/ female toilets? Pah! Priorities, people. "That black curtain [separating the pint glasses from the pin badges] looks like something you'd see in a Soho club," said Stuart, struggling to stifle laughter. "I'll take your word for it," said I. The Black Curtain; got a certain ring to it, though, don't ya think?? (I'm not expecting CSG to answer that, BTW, at least not positively!)


^^^ Bonus points if he deliberately skipped the track, when it started playing again, after the game. For it was no longer 2-0. #tradition


^^^ The win was never in much doubt but we didn't look as solid, at the back, as we had against Eastbourne.


^^^ Drax who? That, I suspect, is what the York Road faithful will be asking after this performance. Perhaps the Chairman, for one, misses him? According to a feature in the programme, CWKHF's favourite season watching Maidenhead United so far came in 2008/09 when - under Drax of course - 'we finished sixth in the National League [sic] South'. Anyone else share fond memories of that particular campaign? No? Hardly surprising. The Maidenhead United bible - 'One For Sorrow, Two For Joy' - summarises as follows:

Also from the same feature: Who is your favourite Maidenhead United player of all time?

'I have to say Dave Harrison as we are neighbours in Cookham - he tells me he was an absolute legend!'

Was? Is. Harry - the only man, I believe, to wear every number (1 through 11) for the Magpies in first team action - was at the game last night; polite as ever, he asked how I was as he passed the Bell End at half time. No sign, though, of Craig O'Connor. Macleod (M) and I had bumped into our former striker, the Monday before last, during 6-a-side at Cox Green School; COC said that he was back from Dubai, for a few weeks, and hoped to get himself down to York Road. Plenty of names (and titles: Director of Community Development, Director of Operations, Magpies In The Community Officer [x4], Photographer & Facebook Editor, Videographer, Website & Twitter Editor, Youth Team Goalkeeper Coach etc., etc.) listed in the 'who's who' section of the programme, meanwhile, but 'John Urry' was conspicuous by its absence. I'd heard that John - another bona fide MUFC legend - had made/ was making a full and swift recovery from recent illness. I hope my information is accurate.


^^^ An assured finish from the impressive Wright. In the '2015-2016 Thoughts and predictions' thread, on the Conference South Nomads forum, I wrote that Dave Tarpey would probably be our top scorer. I'd like to change my answer ...


^^^ Best goal at York Road in a long time. Yes, even better than David Rogalski's superb strike vs Torquay United in the FA Youth Cup. Scouse - Pink Floyd aficionado that he is - noted that 'Shine On You Crazy Diamond' was written in tribute to Syd Barrett, not by Syd Barrett. I have therefore challenged Mick to come up with a Sam Barratt chant based upon a Syd Barrett original. 'Gigolo Aunt', perhaps?


^^^ Just in case Dudley Junior's lawyers are reading this, I'd like to clarify that those words were not spoken by me!

Email ThisBlogThis!Share to TwitterShare to FacebookShare to Pinterest
Labels: #stortford