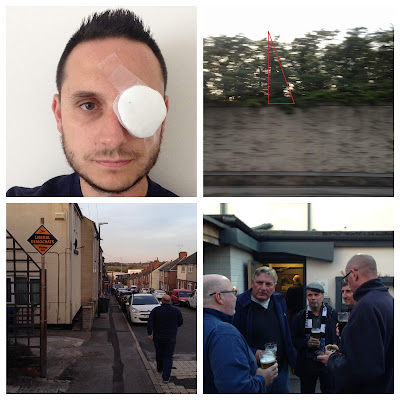 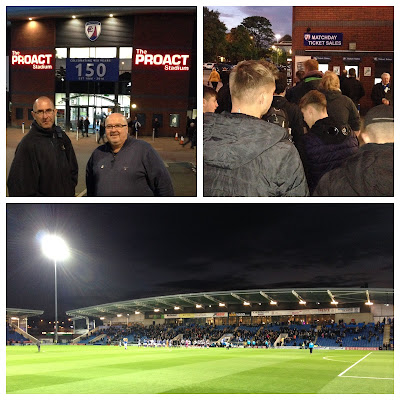 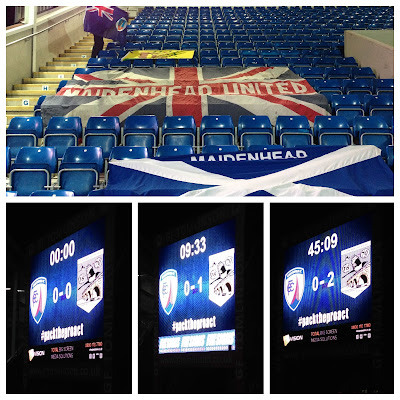 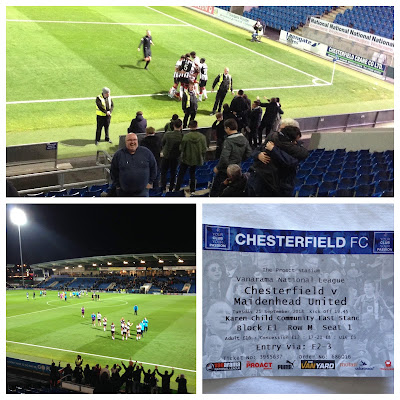 Chalazion removal (viewer discretion is advised), the previous day, meant that I had the whole of Tuesday off; time for a leisurely pint of Rebellion IPA, in the New Inn's warm and sunny pub garden, on the way back from Aldi

Half three departure for the MurdoMobile; moans about the usual (Shanly) as we made slow progress, across town, to pick up Craig

Easy enough journey, up the M40/ A43/ M1, meant that I was taking frightfully flawed photos of the famous wonky spire, from the A61, at half six precisely

Spireite for pre-match bevvies (decent, and only £8.20 for three pints); Bobby P and others, who'd journeyed by train and were staying overnight, had pulled up in a taxi just before we arrived

There was a lengthy queue for match tickets but the entry fee was a relatively reasonable £16, while the hospitable stewards put their counterparts at Barnet to shame

Early goal would be crucial and, surprisingly enough, it was the Magpies who got it after a penetrating run from James Akintunde put Herson Alves in a position to round the keeper and slot home; those two names indicative of an unfamiliar Maidenhead line-up, which had to change again when Alan Massey limped off

Referee (Andrew Miller) was - even by National League standards - infuriatingly shite but, thankfully, he waved 'play on' as James Comley won the ball with a crunching tackle, before slipping Herson in for a repeat of his opening goal; 0-2 at the break

Former West Brom and Celtic striker Marc-Antoine Fortuné had spent the whole game diving over but, after a soft yet predictable penalty had been awarded (apparently the sixth that's been given against us so far this season), he was able to stay on his feet long enough to halve the deficit; however, within a few minutes of the Spireites getting back into the game, Shwan Jalal had performed his best Louis Wells impression, allowing Ryan Upward to effectively end the contest by restoring our two-goal cushion #guffaws

I seemed angrier at Chesterfield's abject display than the apathetic home support, who appear quietly resigned to a third successive relegation; eight defeats out of ten - two points from a possible 30 - yet Martin Allen remains in a job, which might suggest that their incompetent Board cannot afford to pay him off

Everyone in the away end seemed to agree that - despite fine individual performances (e.g. Pentney, Smith, Worsfold), as part of a decent team display - Comley was comfortably the best player on the pitch, let alone our Man of the Match; Herson winning the online poll - 141 total votes; official away attendance was 38 - as grave an injustice as Elegant Strumming by M People beating Blur's Parklife to the Mercury Music Prize in 1994.

Long stretches (Nb. plural) of the M1 were closed; frustrating detours - sound tracked by songs from Belle & Sebastian, Terrorvision and The Fall, and sparking conversation about [1.] FA Cup adventures of yesteryear (Hucknall Town 3-2 Maidenhead United in 2000/01; 380 paying witnesses to goals from Steves Arkins and Brown) and [2.] fatal air disasters - preceded our 1am arrival back in Maidenhead

Don't particularly enjoy the typical away day match experience, in the National League, but I will *never* tire of Maidenhead United providing big (relatively speaking) ex-league teams (e.g. Hartlepool, Tranmere, Leyton Orient) with 'This Is A Low' moments, a la Braintree Town and Bristol Rovers in 2014. 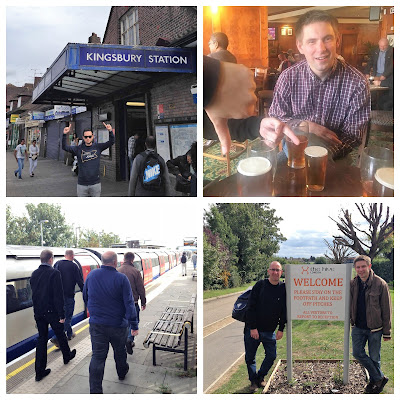 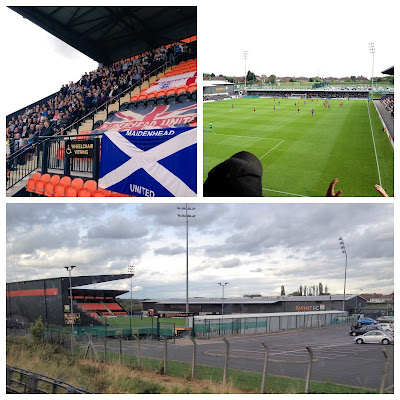 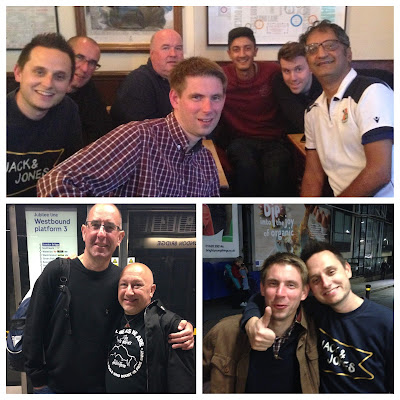 Been to the Hive before - Macleod (M) and I went to see Bristol Rovers' first away game as a non-league side - but I had a pass (of sorts: the wife had assumed that Maidenhead were at home) for this one, as it was my birthday on the Sunday (subsequent gifts included an A4 print, of the Bell End, from @Fitba_Stadiums)

Adjacent to us on the tube sat Chinua Cole (impressive, when called upon, since signing as backup to Rene Steer); good to chat with him and telling, I thought, that he laughed when the subject of his manager at Staines Town was brought up! #drax

Recommended - by Craig - pre-match watering hole was the Wetherspoon's (did the job; don't be fooled by Willie T's half pint) in Kingsbury; the NW London district where, incidentally, I'd spent the first five years of my life

No surprise that Barnet had ideas above their station, as we'd been warned to expect as much: the stewards made us hold up all of the flags to the CCTV cameras, before entry, to ensure that they didn't feature any racist or offensive slogans, while the 200+ away fans were crammed into a tiny section of the new(ish) stand (that had been a decent covered terrace, packed with Gasheads, back in 2014) #pathetic

Early goal - Craig and I were still in the (sizeable) bar - settled a poor game (the only saving grace was that, thanks to a free ticket from the Chairman, I didn't pay to get in); not much else to add except that the home side missed a late penalty - almost as much as they missed David Tarpey - and ultimately deserved their narrow win over a below par Maidenhead (who weren't helped by ineffectual substitutions, which only served to provide Barnet's impressive #26 with unnecessary heading practice)

To the Royal Oak in Borough, straight after the final whistle, for a beer up with some of our old friends from Wealdstone (on their way back from a 1-1 draw with Dulwich Hamlet at Tooting & Mitcham); almost too much fun ... a case of 'my memory kinda hazy' towards the end of the night and I, for one, was feeling somewhat delicate come the following morning!