*Match Abandoned after 67 mins due to 'elf n safety'


So the referee abandoned the match on the advice of the ground's 'elf n safety' officer (who is, presumably, a W@nky Wanderers employee)? I imagine Davies would (now) say that he had to stop, initially, because of the lightning and then couldn't re-start - after the lightning had passed - because the incessant rainfall had subsequently made the pitch unplayable. I very much doubt, though, that the same decision would have been reached if the home side had been 3-1 up. There were plenty of thunderstorms and heavy rain across the country on Saturday, but how many League games started and failed to finish? Just the one.
Rovers certainly have many positives to take from their performance but it is difficult to focus on that, in all honesty, at the moment. As a Maidenhead United fan, my dislike of W@nky Wanderers (a term coined after their then-manager Martin O'Neill made some disparaging remarks about the Magpies when linked with the Nottingham Forest job in the early 90s) was already deep-seated. I now dislike them even more (if that were possible). As such, I'll feel exceedingly sore when they win the re-arranged game. Which they will. W@nkers.

PS. Back to my place, after the game, to watch Chelsea vs Newcatle on ESPN and enjoy a fine chicken curry, lovingly made by the wife. We then all watched 'Indiana Jones and the Kingdom of the Crystal Skull' (as my Dad loves Indiana Jones, almost as much as he does Chelsea!). My verdict (on the film, as I don't give a #### about Chelsea)? Well, clearly the 'Last Crusade' should have been exactly that.
Posted by Lenny Baryea at 14:50 No comments: 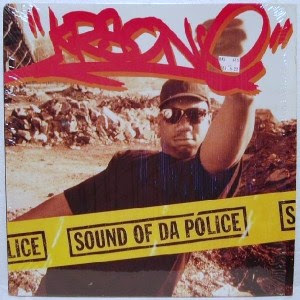 The second Stones home game of 2012 for me and Macleod (M), but Craig's first ever visit to the 'Land of Scaffold Poles'. Craig was actually the catalyst for our attendance; running the rule over the excellent facilities at the Ruislip Manor Sports & Social Club ahead of the Tartan Army's visit to Wembley next summer. 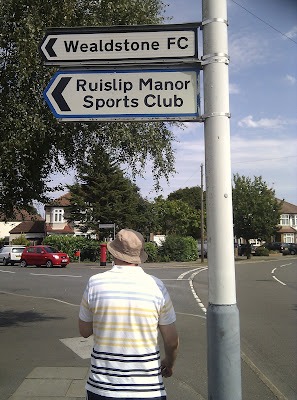 The bright sunshine and sweltering heat accounted for Macleod (M) wearing a floppy hat à la Liam Gallagher Roberto Mancini. I was in flip-flops. Gallagher (L) Mancini (R) Macleod (M) wanted to watch the Dirty Leeds game and so we went to Ruslip tube station, as opposed to Ruislip Manor, primarily in the hope of finding a pub showing El Hadji Diouf et al in action. We did find one: an Irish place called the Laurels which, judging by the huge array of CCTV cameras, is probably quite 'lively' come nightfall. At one stage a riot van parked up outside. We wondered whether this might be the Met Police team bus! 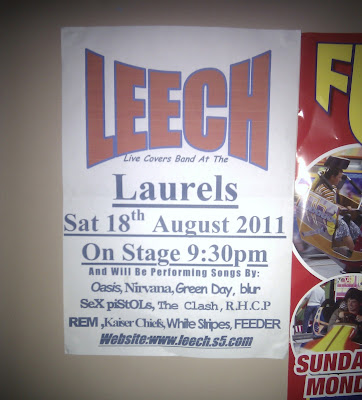 I assumed that the Laurels were immensely proud of having hosted Leech, and so had kept the promotional poster up ... Macleod (M) pointed out it was more likely that someone had instead put down the wrong date (year). Oh yeah!

As well as the fact that the Laurels is infinitely better than the Ruislip Manor equivalent (Hennessey's) - and that we'd out-foxed any waiting spotters - another bonus of going to Ruislip was that the walk to the ground seemed more direct and possibly slightly shorter. We were to pass Hawtrey's restaurant en route. This reminded us of Mr Logic, as the MUSA Chairman is a dead ringer for the late Carry On actor: 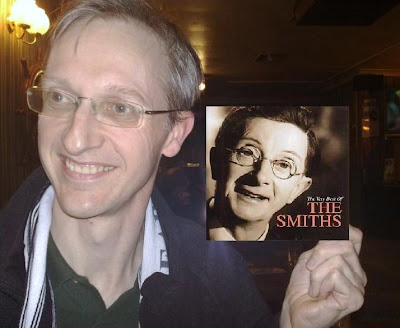 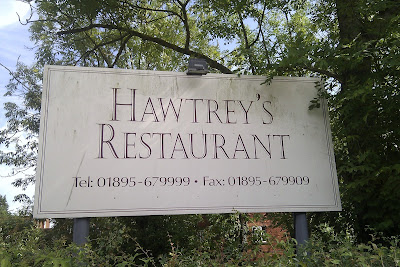 Charles Hawtrey Logic had actually been mentioned earlier in the day, as we briefly discussed his beloved Ross County's match-up with Celtic. Indeed 'Scottish football' cropped up on several occasions: (1) Rangers' record-breaking fixture with East Stirlingshire and (2) our planned excursions to see the Shire at Ibrox in March and then at Elgin City. The Elgin match is in May, the final league game. Typical of us to be busy organising a trip for the last day of the season, on the first day of the season!

We arrived at the ground just after kick-off (beating Grim, who had been delayed due to 'leaves on the line' or something). Further pints were supped as we basked (or, more accurately, baked) in the sun, sat on the benches close to the turnstiles. Richard Jolly (who else?) had given Wealdstone the lead and Macleod (M) had collected on a scratchcard (with Rangers, picked on my insistence; he was going to choose Northampton!) by the time we ventured inside the ground.

Macleod (M) and I considered going behind the goal the visitors were attacking and rousing the team (what is the point of them, BTW?) with a chorus of  KRS-One, as and when they got a corner, but we decided against. Too hot. The weather probably explains why the on-field play and off-field atmosphere both seemed somewhat flat. A bit 'pre-season', if you like. A decent attendance (415 - over a hundred more than were at York Road for MUFC Ltd vs Tonbridge Angels) but little or no sustained noise. As aforementioned, too hot. 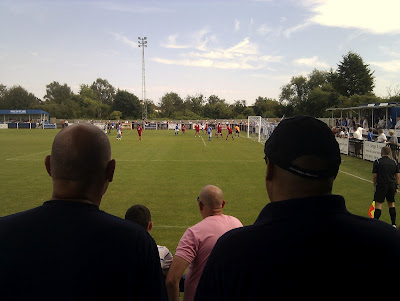 Back into the bar at the final whistle. Relative coolness. More pints and plenty of guffaws at Liverpool, QPR and - later on - Tottenham Hotspuds. Topics of conversation included Lewes (the Stones visit them next weekend; should be interesting), Dominic Sterling (who apparently signed for Tooting, rather than the Stones, after our last visit and is now at Kingstonian), the Magpies' opening day win (hats off; I was fully expecting a repeat of last year's 4-0 reverse), Johnson Hippolyte (a former Wealdstone striker, lest we forget), why WFC now play in all-blue rather than blue and white quarters (apparently their kit supplier doesn't do quarters; easy solution - get another kit supplier!), Newport County,  The Rezillos ... 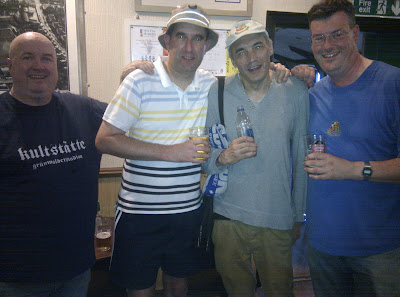 In summary: another boozy day. I think we'll have to leave it a while before our next WFC game as my liver won't be able take too many visits! Best of luck to them, though, as always. Fingers crossed, meanwhile, that MUFC Ltd get a decent FA Cup draw, otherwise Salisbury in November will likely be our first Magpies game of the season. Either way, I suspect shorts, sunglasses, floppy hats and flip-flops won't be required. Probably Definitely for the best! 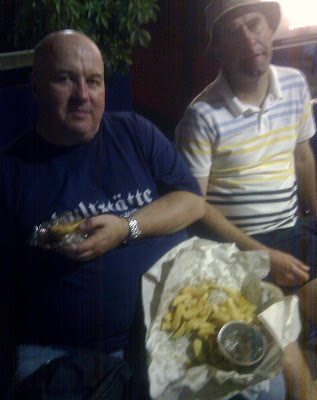 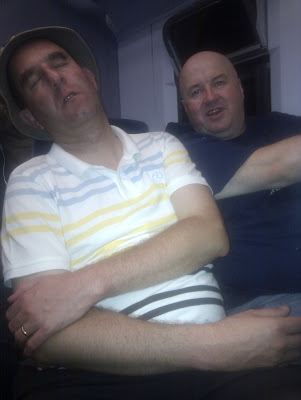 You keep on joking but surely you must have some serious concerns for the long term despite the obvious short term improvements in your team? ~ FC83

"These investors are different", "they care about the club", etc etc ~ FC83

Whatever would an Oxfordshire based Insurance Company possibly want here? Wonder if they can afford the ground improvements required ~ Kingfield Ender


From what little I know through living in the area, Bridle want to sell the land the existing ground is on, and move to another 'purpose built' (Never got that description - surely everything is built for a purpose!) stadium in Eastleigh, where they'll be circa 50 seats for every fan. ~ Simon Lynch

It would cost a lot of money to upgrade it and I can't see Bridle doing that. If the ground was in place I could see the point of the spending. ~ Kingfield Ender

Eastleigh have never done anything to suggest that local people will get behind them and are far too close to Southampton to ever have any potential. Land can be the only motivation. ~ Dave the bounty hunter ^^^ Les, Macleod (C) and I during one of the dullest games of football I've ever had the misfortune to witness: a 0-0 draw at Eastleigh in February 2009 (we were stone cold sober, at this game, which didn't help!). Seats added to 'behind-the-goal' standing areas at non-league football grounds? Great idea! Not.
Posted by Lenny Baryea at 19:25 No comments: