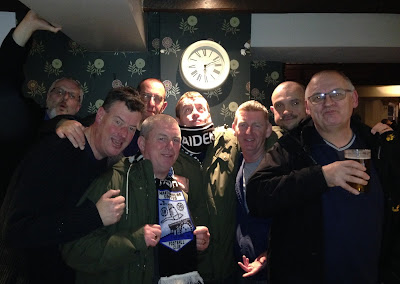 ^^^ Post match beers after our 2-0 win vs the Stones on New Year's Day. Our first victory against them in nine attempts. Or something. We'd lost at Grosvenor Vale as recently as Boxing Day. Yours truly featured in their award-winning programme. In case anyone missed it ... 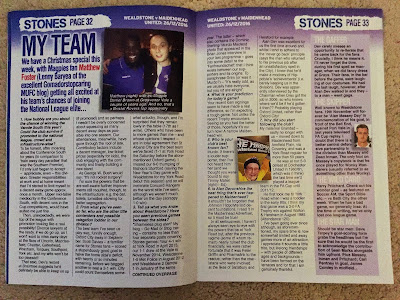 ^^^ The Mallet reference not my doing. If I had mentioned him, then I'd have suggested a different photo. ;-) TBF, very little of my text was changed. Spot the difference:

How excited are you about the chance of winning the Connie South this year? Could the club survive if promoted to the National League, crowd and infrastructure-wise?

TBH, after moaning about the Conference South for years (in comparison to ‘train away day paradise’ that was the Southern Premier), I’d only just began to accept –  appreciate, even – this division. Greater responsibilities at work and at home meant that I’d started to limit myself to a decent away game approx. once a month. Upper mid-table mediocrity in the Conference South, with decent runs in the Cup competitions, would’ve suited me just fine. Then, unexpectedly, we were top of the league with promotion looking like a real possibility! Divorce lawyers at the ready, if we do go up, as I won’t want to miss away days at the likes of Lincoln, Macclesfield, Chester, Gateshead, Wrexham, Torquay, Southport, York etc. and my wife won’t be too pleased!

That said, Dev’s record at Braintree suggests he’d definitely be able to keep us up (if promoted) and so perhaps I needn’t be overly concerned about squeezing as many decent away days as possible into one season. Our attendances, meanwhile, have gone through the roof of late. Contributory factors include a decent manager, low ticket prices (esp. for kids), the club engaging with the community and finally building a new stand. As George W. Bush would say: ‘It’s not rocket surgery!’. I’m sure the powers that be are well aware further improvements still required, though, to the infrastructure: e.g. the bar, toilets, turnstiles allowing for better segregation.

From what you've seen so far, who are the other title contenders and possible relegation fodder in our division?

The best team I’ve seen us play was, funnily enough, Oxford City away in September. Scott Davies – familiar name for Stones fans – scored a stupendously good goal to halve the home side’s deficit, with twenty or so minutes remaining, before we bagged another to seal a 3-1 win. City could count themselves somewhat unlucky, though, and I’m surprised that they remain lowly in the table (17th as I write). Others who have been to more games than me – and who’s opinions I respect – are in total agreement that St Albans City are the best team we’ve faced (1-1 at York Road the Saturday before the aforementioned Oxford game). I missed our 6-0 thumping of Bishop’s Stortford (saving the New Year’s Day game with Wealdstone for my York Road debut this season UPDATE: I actually made it to Maidenhead United 5-0 Dartford; fortunate enough to see Tarpey's wonder goal in the flesh) and so will nominate Concord Rangers as the worst side I’ve seen, although we weren’t much better on the day (scrappy 1-0 win).

Tell us what you know about Wealdstone? Have you seen previous games between the sides?

*Shameless plug alert* My blog – Go Mad or Stop Caring – contains no less than four separate posts covering Stones games: your 4-1 win at York Road in April 2015, our 1-1 draw at the Vale in November 2014, Wealdstone 1-0 Met Police in August 2012 and Wealdstone 2-1 Barrow in January of the same year. The latter – which also contains the Dominic Sterling photo that you mention – goes into some detail re the ‘Fanfreundschaft’ that I think exists between our supporters and its origins. To paraphrase Grim (or was it Murdo?) – "It's really odd, as we usually hate everyone, but you lot are alright".

What is your prediction for today's game?

Your recent loan signings seem to have made a real difference, so I’m expecting a tough game. Not unlike the recent Trophy encounters. Seeing as you had the better of those, hopefully it’s our turn now! Narrow Maidenhead win.

Who is your club's best known fan?

Murdo. If there’s a louder supporter, then I’ve not heard him/ her.

Is Alan Devonshire the best thing that's ever happened to the Magpies?

It shouldn’t be forgotten that Johnson Hippolyte laid decent foundations. I read it in the Maidenhead Advertiser, so it must be true! In all seriousness, I haven’t always seen eye-to-eye with the powers that be at York Road but, after the previous regime (some of whom remain) nearly ruined the club financially, we were rather fortunate that it was Peter Griffin and Pharmalink to the rescue, rather than the charlatans who were involved at the likes of Salisbury and Hereford for example. Alan Dev was excellent for us the first time around and, whilst I tend to adhere to the ‘never go back’ principle (says the man who returned to his previous job after an unsatisfactory spell in the City), I knew that he’d make a mockery of Hippolyte’s ‘achievements’ (i.e. barely keeping us in the division). Dev was apparently interviewed by the Chairman when Drax got the job in 2006, so who knows where we’d be if he’d gotten it then?? Probably playing Oxford United, rather than Oxford City!

Why did you start following the club?

My maternal Grandad – sadly no longer with us – moved down to Maidenhead from Annfield Plain, via Coventry, and was a York Road regular for more than 50 years. He was at our 5-0 defeat at Colchester United in 1960/61, which was (I think) the last time we’d played a league team in the FA Cup until 2011/12. He first took me to York Road when I was a toddler in the early 80s; I think my first game was a 3-0 FA Trophy win against Walton & Hersham in August 1985 (Att 120). I’ve been going ever since although, as aforementioned, my spare time is now somewhat limited and away games more of an attraction. I appreciate it sounds a little trite, but lifelong friendships – with people of different ages and backgrounds – have been formed on the terraces and for that I am genuinely thankful.

Rarely misses an opportunity to re-iterate that he came back for the fans. Crucially, I think he means it. I’ll never forget the time, during his first spell as manager, when we did fancy dress at Grays. Their fans, in the bar before the game, were laughing at our costumes. We had the last laugh, however, after Alan Dev walked in and they – to a man – went gaga.

Well known to Wealdstone fans. 19th November will forever be ‘Alan Massey Day’ in commemoration of his goal, in front of the Bell End, against Port Vale in last years televised FA Cup replay. I doubt that there is a better central defensive partnership in the division than Massey and Dean Inman. The only blot on Massey’s copybook is that he once played for Wonky Wanderers (usually referred to as something other than Wonky).

Harry Pritchard. Check out his wonder goal – as featured on Soccer AM, the Sport Bible etc. – vs Bath City the other week. When he has a bad game, we generally lose. At the time of writing, we’ve only lost one league game.

Should be star men; we’ve a strong side. Dave Tarpey’s goal-scoring form grabs the headlines – and rightly so – but I’m sure that he would be the first to acknowledge the contribution of Sean Marks alongside him upfront. The aforementioned Massey, Inman and Pritchard; Carl Pentney in goal, James Comley in midfield; we’ve some good players ... as our league position would suggest.
Posted by Lenny Baryea at 23:50 No comments: