Bullsh!t-o-meter at York Road exploded a LONG time ago

A member of the tw@tterati (#coronationstreetinnuendo) - likely bearded and flat-capped (no offence, Duke of Sutton!) - once commented to his cyber friends that this was a 'shit blog that no one reads'. Shit? Yeah, probably. No one reads? Err ... more page views than the total population of Leyton. Stick that up your Orient. You bell end.

Our most popular post, as I write? This one (more than 1200 views). You've probably already read it. If not, please feel free. A sad indictment - (belated) new stand aside - of the Drax/Pharmabank era.

Time for a follow up, after reading today's Advertiser back page ... 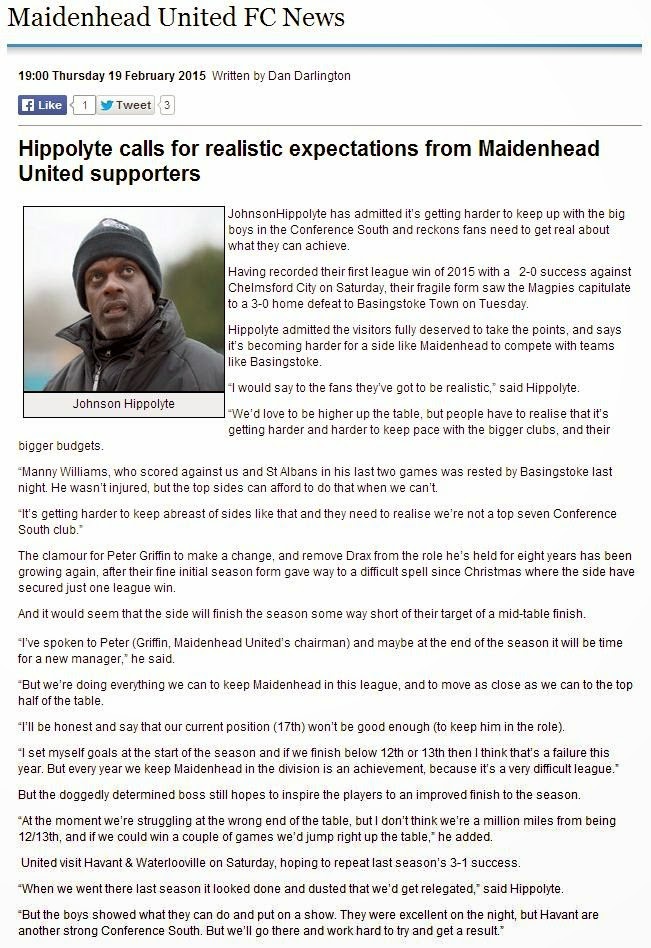 ^^^ Chelmsford City. Yeah, let's start with them (ignoring our characteristically long, win-less run in the league). Danny Green. Great last season. First name in the team (as the chant goes). Essex-based and a new father. Word on the street last summer? He was gone. Signing for Chelmsford. Then, all of a sudden, he'd re-signed for us. Yay! I have it on good authority - which the powers that be will, of course, refute - that we made him an offer the Clarets couldn't match (or even get near). Bear that in mind, when Drax bleats about the 'bigger clubs'.

^^^ Basingstoke?? Really?? Time to give it up, gaffer, if you genuinely believe that.

I would say to the fans they've got to be realistic

^^^ What about the 'real' fans; have they got to be realistic too or, by definition, are they already realistic?

Manny Williams, who scored against us and St Albans in his last two games was rested by Basingstoke last night. He wasn't injured, but the top sides can afford to do that when we can't.

^^^ Manny Williams?? Remind me how many goals he scored during his last spell with us. Dave Tarpey or (Not So Super) Manny? An easy decision. Nb. other Maidenhead rejects currently featuring for the 'mighty' Basingstoke include Shaun McAuley and Chris Flood.

It's getting harder to keep abreast of sides like that and they need to realise we're not a top seven Conference South club.

^^^ We're not a top seven Conference South club?? No shit! TBF, who claims that we are ... or that we should be? Not me. But we shouldn't be bottom seven. Yet we seemingly always are ...

I've spoken to Peter (Griffin, Maidenhead United's chairman) and maybe at the end of the season it will be time for a new manager

^^^ If the Chairman really did 'know his football', then Drax would've been gone last summer. As planned. Heck, as aforementioned, those who really do know their football would've gotten rid as early as December 2007 ...

Every year we keep Maidenhead in the division is an achievement, because it's a very difficult league

^^^ Difficult league?? The general consenus is that this is the worst Conference South anyone can remember ... and Salisbury's expulsion means there are (at most) only two teams to be relegated! Ye Gods, that man talks more bollocks than Taylor! Carl - not unfairly - used to get loads of grief for his comments in the paper. I defended him, at the time, because he had 'credit in the bank', as it were, after being Alan Devonshire's chauffeur Assistant for many years (and for actually taking the time to speak with the fans after games).

Certain individuals - who were keen to stick it to Carl - have been noticeably quiet, over the years, re. Drax's continued bullshit in the press. That's because they are, IMO, hypocritical sycophants (#yesgriff).

They know who they are.

These same individuals will, no doubt, 'look the other way' when their cyber friends misbehave; call me a 'cunt' and 'twat' on their social media network of choice (Nb. the stripey sock wearing Jabba lookalike said bugger all, to my face, when sat right next to me - I didn't know who he was - in the Anchor one time).

Remember them - the hypocritical, sycophantic yes men - as you, justifiably, lament another Maidenhead defeat and call for Drax's head (whilst struggling to stifle guffaws at his subsequent excuses in the paper). They're as much to blame as he is and, worryingly enough, will have a say re. his successor.

PPS. Plodding along
Posted by Lenny Baryea at 23:59 No comments:

I belatedly read last week's Advertiser; written post 3-2 defeat at Basingstoke (apparently they were 'bloody lucky'; the referee 'killed us' as usual), pre 2-0 win over 'profligate' - Nb. not Drax's description - Chelmsford (our first 3pts of 2015; of course we weren't lucky, no siree!) and last night's 3-0 home drubbing by Basingstoke (< insert excuse here >)

Anyway, the main article inside the back page finishes with the manager stating that we'll keep 'plodding along'.

It feels, to me at least, like we've been plodding along for years ... 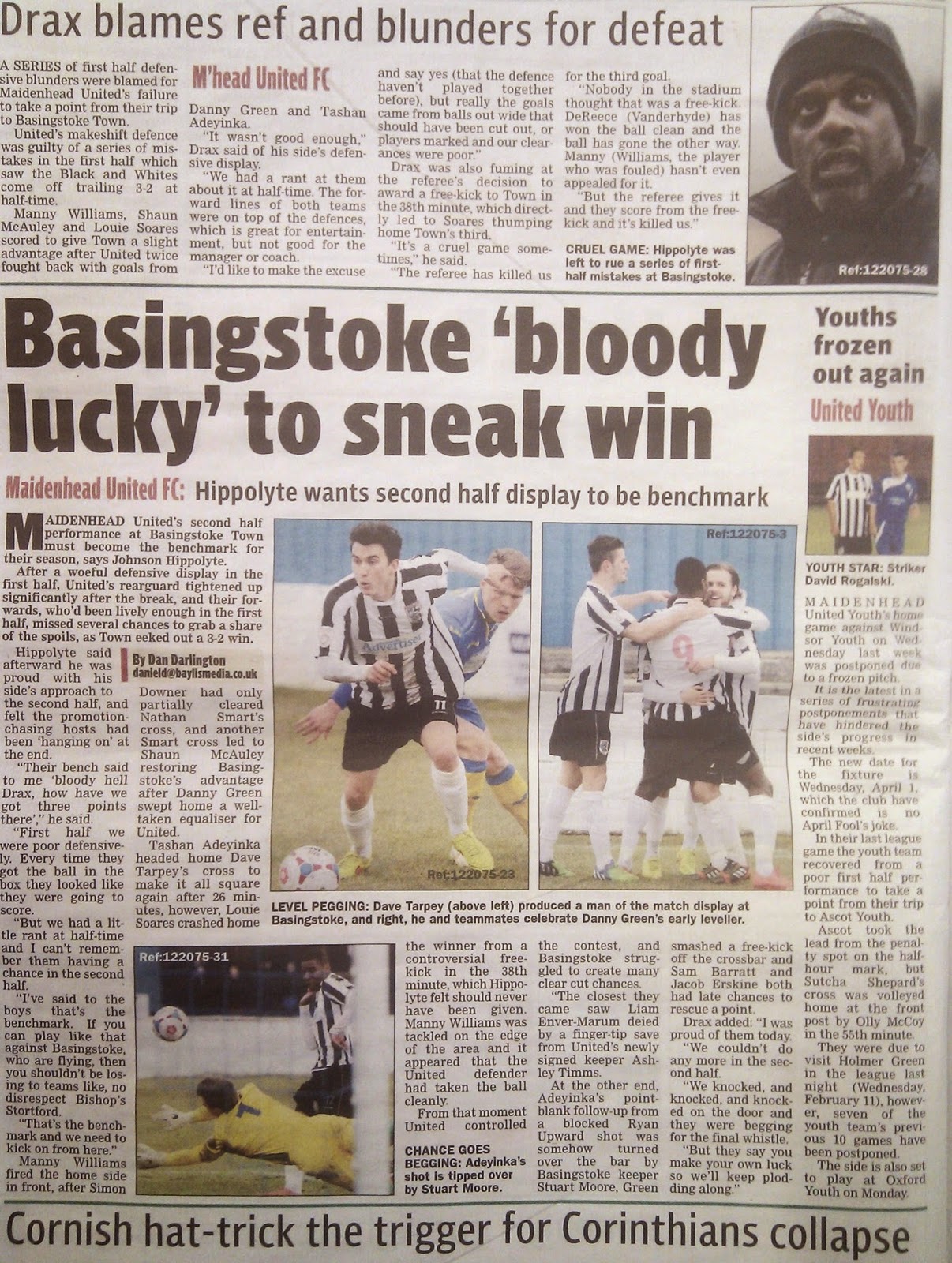 PS. Love the headline re. the cancellation of the U18 game. 'Youths frozen out again'. Twas ever thus!
Posted by Lenny Baryea at 20:20 No comments: