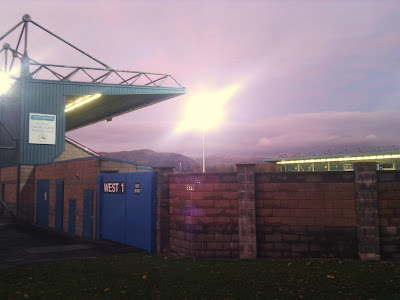 ^^^ After last year's excellent trip to Aberdeen, featuring the Shire's 4-0 defeat at Arbroath, a weekend in Dundee - and the Shire at Montrose - was mooted for this season's Scottish jolly. Instead, the Stirlingshire derby at the end of October proved more enticing and feasible; flights were finally sorted whilst I was enjoying a (birthday) week of sunshine, in Croatia, in early September. The two worst teams in Scotland's bottom division? I, for one, was looking forward to it. 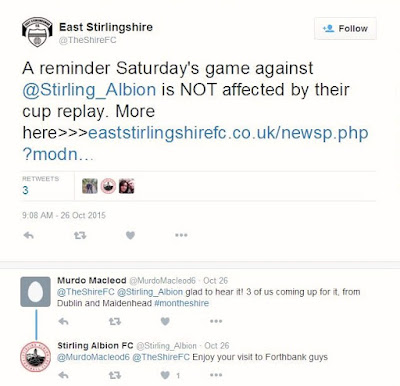 ^^^ The match was on. Which was obviously a relief! 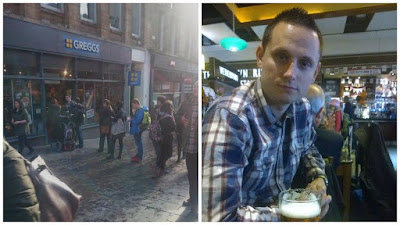 ^^^ Welcome to Scotland! Macleod (C) was on the red eye from Dublin and so in Glasgow before my Dad had even dropped me and Macleod (M) at Heathrow. 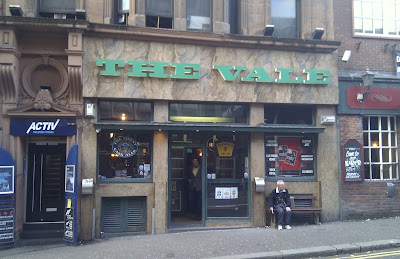 ^^^ We told him to find a pub, preferably close to Queen St station, and he chose the Vale. Apt, bearing in mind Maidenhead United's upcoming FA Cup opponents. 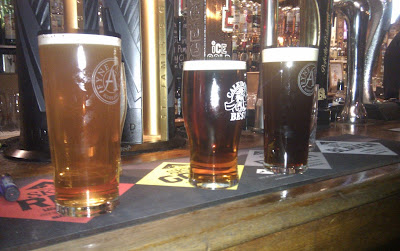 ^^^ Thumbs up from Craig, on Facebook, and no wonder; beers of the weekend in here. I was certainly a Happy Chappy. 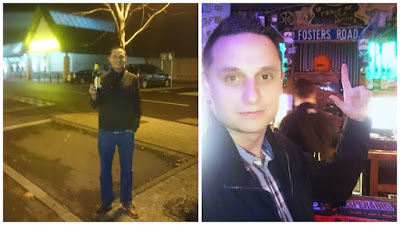 ^^^ After a train ride to Stirling full of boisterous (i.e. drunken) Scots - it wasn't yet 6pm! - we caught a taxi to the out-of-town Holiday Inn Express (close to the football ground, actually). A few pints in the hotel bar - 4% Stella; rather good - before we thought it high time to sample the nightlife. We decided to walk into town, via the nearby Morrisons; warm beer and cold pies #epicfail A challenge was set to help pass the time: personalise a chant for Dean Inman (UPDATE: we have a winner!) The cramped Port Customs Bar was our first stop; Grimsby vs Cheltenham on TV, below average pints of T. The nearby - and highly-recommended - Kilted Kangeroo followed; virtually empty. We consulted the What Pub website and headed to No 2 Baker Street. Macleod (C)'s weekly accumulator had been busted - already - by Bayern's goalless draw at Eintracht Frankfurt, but I was cheered by news of Rovers winning at Cambridge; Macleod (M) by the breaking story on SSN that the Crazy Italian was willing to sell Dirty Leeds. (UPDATE: quelle surprise) Some passable real ales as well, while the female vocalist wasn't bad. Dancing grannies with tats and short dresses, though, so we only stayed for one. 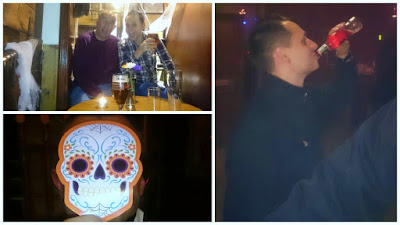 ^^^ Nicky-Tams Bar & Bothy was next. Ed McSheeran was playing - live - the whole of the Rocky Horror Show. Impressive enough, but not our thing. It dawned on us (wait for it ... ) that the nightclub, Dusk, was close. Some bloke on the train had suggested that we avoid it like the plague. We paid £5 each to enter and almost instantly wished that we'd followed his advice; I think that, aside from one geriatric bouncer, we were the three oldest people in there! A couple of reasonably-priced, silly-coloured drinks and we were on the move once again. 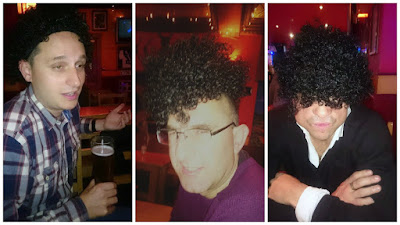 ^^^ Back to the Kilted Kangeroo; initially we were told that it was closed but then one of the bouncers said he recognised us from our TV work earlier and took pity on us let us in. Wigs-a-go-go. Apparently town was dead because everyone - but especially the students - would be saving themselves for Saturday night's Halloween festivities. Something to look forward to. Aside from the football. Obvs. 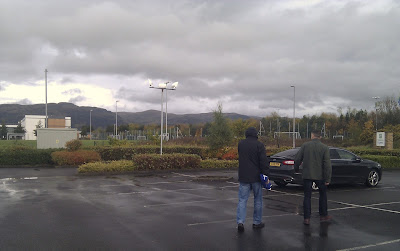 ^^^ Up bright and early (actually, it wasn't bright ... nor particularly early). After two breakfasts (one at the hotel, another at a nearby pub #wheninrome) we headed to the ground, as Craig apparently knows someone on the SAFC board. 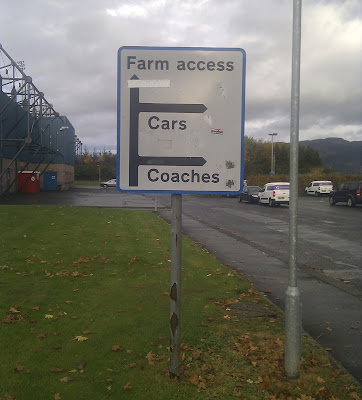 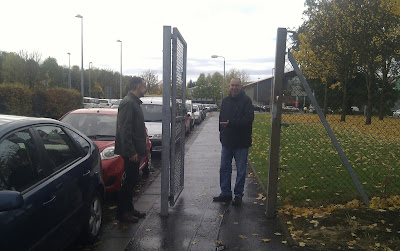 ^^^ Worst. Gate. Ever. The main stand was, primarily, a leisure centre. We were greeted at the entrance by a gentleman in an SAFC polo shirt who, it transpired, was the Albion chairman! He lead us upstairs, past well-presented corporate suites, in search of Craig's contact. No dice. The bar was showing the Celtic vs Aberdeen game, rather than Chelsea vs Liverpool, so we thanked him and walked lumbered into town.

IF A LIVERPOOL FAN WAS A COMMENTATOR (CFC 1-3 LFC)The Deluded Commentator, Jimmy Liddel, was at Chelsea to see Liverpool give Mourinho more problems.Its their year again !
Posted by YNFA on Saturday, 31 October 2015


^^^ After witnessing a couple of intoxicated NEDs throwing punches at each other on the main shopping street - and brief but uncomfortable spells in various packed boozers (including the Port Customs again) - we settled in Katie's Bar & Bistro. No football on TV, but Sally Cinnamon on the jukebox. Another defeat for Chelsea - much to Jimmy Liddel's delight (above) - was confirmed as we caught a taxi back to the ground. 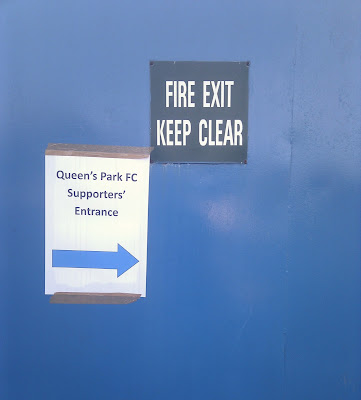 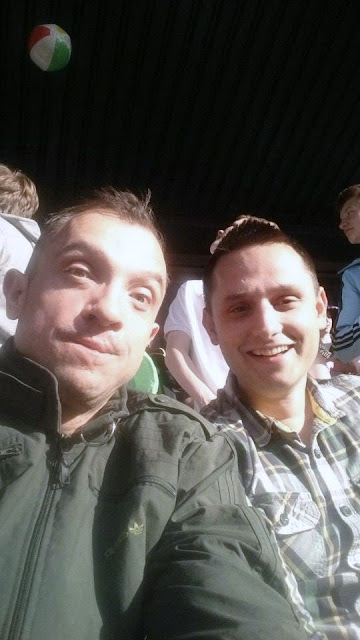 ^^^ Spot the (beach) ball. I vividly recall sitting in the away section, eating a Scotch pie as 3pm approached, starting to wonder what I was doing there. Then, all of a sudden, about 30 teenagers rocked up in fancy dress with various inflatables; 'I'm well pished!' slurred one of them, and he wasn't wrong!

^^^ The Shire Youth were superb throughout. A real credit to their club. 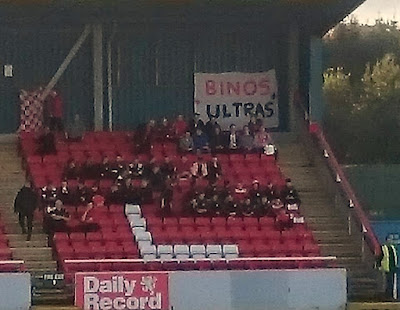 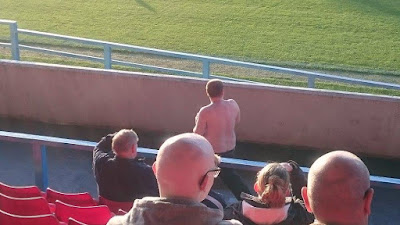 ^^^ No doubt Cars Fooked was also prood of ye. 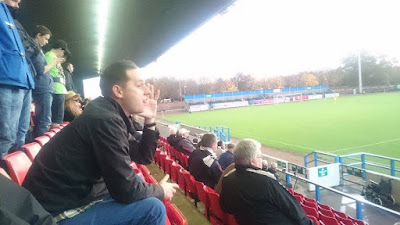 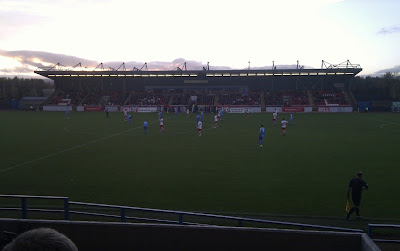 ^^^ Match action. If it looks a little dark, that's because it was; the electrics kept failing. I doubted, at one stage, whether the game would get finished. 0-0 the final score; 618 saw it; Shire #4 (Townsley) won everything in the air; Shire #6 (Lynas) was all-action; ex-Magpie Richie Barnard on the bench. 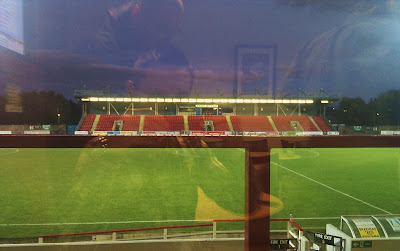 ^^^ We headed to the bar, at the final whistle, for cans of T. A bit sterile; no sign of Craig's mate; the locals didn't seem interested in talking (to us). Confirmation came through that Maidenhead had beaten Basingstoke in a seven-goal thriller. Craig was the first - but not the last - to suggest that we'd have been better off missing our trip to Forthbank, to see the two worst teams in Scotland, and gone to York Road instead. That doesn't account for the fact, though, that this was the best goalless draw I've seen in the flesh; 3-3 would have been a much more accurate reflection. A thoroughly entertaining encounter between two footballing sides who simply couldn't finish. And a red card to boot (the home side could/ should have been reduced to nine men). Plus a mightily impressive turnout, as aforementioned, from the Shire Youth. Nah, we'd made the right choice. So long as Saturday night wasn't as quiet as the Friday night ... 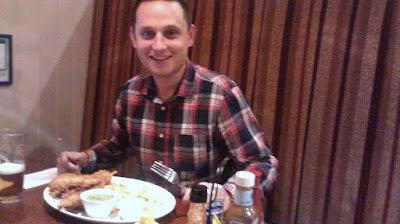 ^^^ Dinner at the place where we'd eaten breakfast, betwixt the ground and the hotel. Big fish n chips = big points with the wife. 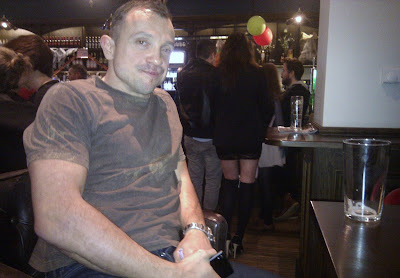 ^^^ Into town and - as we were keen on somewhere to sit, with real ales available (#gettingold) - straight to the local Wetherspoons; the Crossed Peels. Initially we thought this place rather pokey, but it transpired that the upstairs area was vast. We stayed at ground level, however, and not just because the queue for the bar was significantly shorter. As X-Factor played on the TV screens, we had our own game of Fancy Dress Factor; Macleod (C) was Louis Walsh (to be sure), Macleod (M) was Simon Cowell (obvs.) and I was, um, Cheryl Cole-Fernandez-Versini-Foster-Harding (or whatever she's called these days) as we took it upon ourselves to judge the hundreds of students who came through the door in costume. Top three, in the 'Best Female' category, as follows:

[1.] Maleficent, [2.] Troll dolls (kudos, to the three in Stirling, for colouring and backcombing their real hair), [3.] Statue 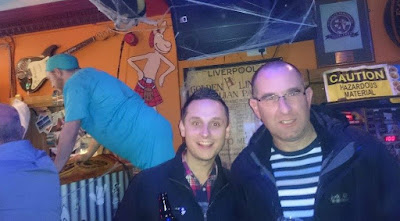 ^^^ Another visit to the Kilted Kangeroo; we were virtually on first name terms with the bouncers at this point! As they'd predicted, MUCH busier than the previous night. We were among the tiny minority of people in 'normal' clothes and I, for one, felt a tinge of regret; when my wife had first clocked the date, that we would be away in Scotland, she'd asked whether we'd be going out in costume. 'No,' my scoffed reply, 'why would we?'. Whilst the Macleods are correct, in that we have nothing to prove when it comes to this sort of thing, I think it a shame that we didn't join in; what's the point of keeping a fancy dress box otherwise?! I have Sylvester the Cat in the loft and could easily have rustled up Borat (complete with Kazakhstan pin badge, American flag and cardboard sign). Anyway, it's safe to say that we underestimated the seemingly ever-increasing popularity of Halloween. Won't happen again. 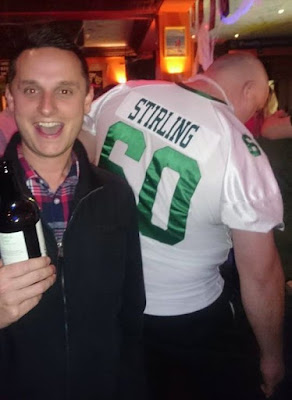 ^^^ I'd noticed, on a t-shirt, that the University of Stirling's American Football team - the Clansmen - had won back-to-back National Championships in 2014 and 2015; by the look of this bloke, it's easy to see why! BTW, Old Mout's Kiwi & Lime flavoured cider went down a treat! 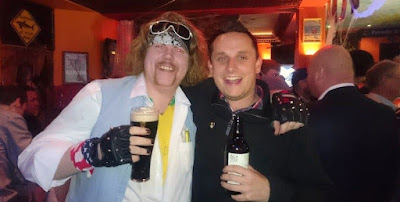 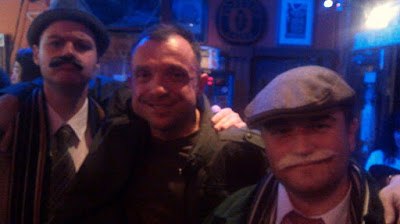 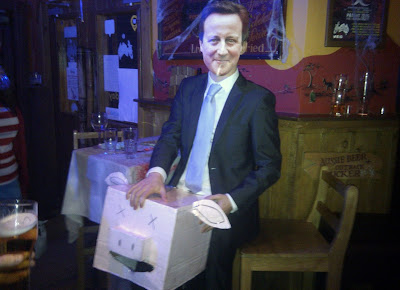 ^^^ The DJ - who, at one point, played The Cramps; much to Macleod (M)'s delight - gave the 'Best Male' award to a bloke dressed as Pat Sharp but, if it wasn't for his Fun House t-shirt, then I'd have said that he looked more like Flip from This Is England '90. No, the Fancy Dress Factor judges were in unanimous agreement that David Cameron, above, should've 'brought home the bacon' (as it were). 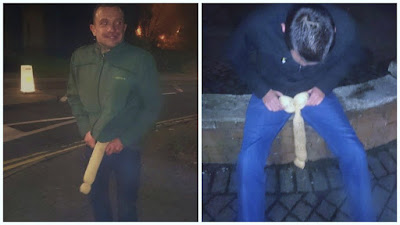 ^^^ It was cold, TBF. It was! Foggy as well. Fog, incidentally, that would cause travel chaos at Heathrow the following day; almost seeing to it that Macleod (M) and I spent another night north of the border. Anyway, the above 'accessory' was actually part of a costume belonging to one of the aforementioned Shire Youth. Craig highlighted, on the Monday, a video of them that had been uploaded to the Scottish Football Away Days group on Facebook. 'Fannies', 'Shite' and 'Embarrassing' were typical replies. Macleod (M), in contrast, was the voice of reason: 'Made plenty of noise, mostly in good humour ... Why the negative comments? Would you prefer that they all jumped on the Old Firm bandwagon?' 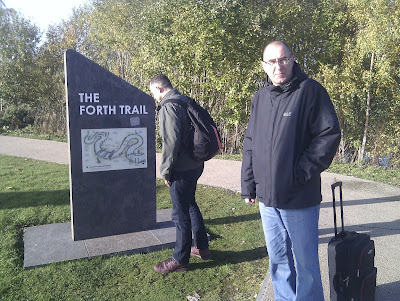 ^^^ The walk, from hotel to station, on Sunday morning. Did you really think we'd go a whole weekend without #yeractualcultureinnit ?! 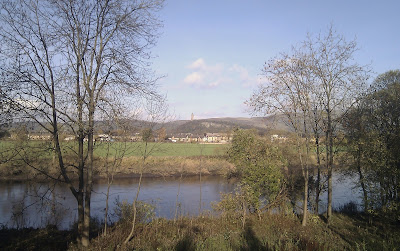 ^^^ The view across the Forth towards the Wallace Monument. Before long we were in the Auctioneers, back in Glasgow, watching Rangers lose at Hibs and Everton thrash Sunderland. Final thoughts on Stirling? Well, it's not Aberdeen. But, then again, that's self-evident! Certainly worth a visit, I'd say, particularly if Shire are havin' a party. And Stenny have gone to bed.
Posted by Lenny Baryea at 17:00 No comments: