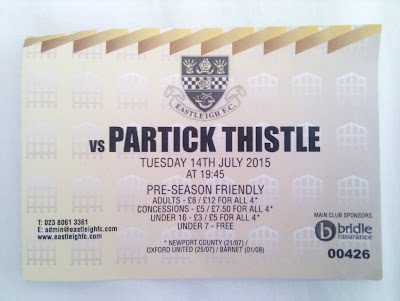 Maidenhead United's standout pre-season fixture this summer, certainly as far as Macleod (M) and I were concerned, was Wingate & Finchley away; a chance to run the rule over one of their new signings - ex-Magpie youngster Lee Barney - and, perhaps more importantly, tick off another ground (#notgroundhoppers). Imagine our DISGUST, therefore, when it transpired that the fixture was to take place at Bisham Abbey.

Nae bother! Eastleigh vs Partick Thistle, arranged for the same night, was a more than adequate replacement. How so?

1. We have a soft spot for the Jags (generally) and their red and yellow striped shirts (specifically)
2. It was high time that Macleod (M) managed to take in a football match at Eastleigh

Allow me to elaborate … 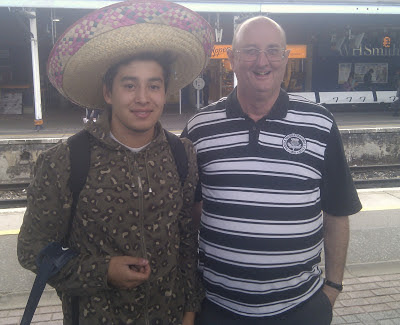 ^^^ Brian (above, sans headgear, en route to Gosport Borough in September 2013) and Paddy - both Maidenhead United home and away regulars during the 'Born & Bred' years - are Partick Thistle fans. I presume it was the former - partial to lusty, post-match singalongs in the pub - who introduced 'Soggy Sombrero' to the York Road terraces. It has proved immensely popular - I remember one woman, whom I'd never seen before, coming over to the Canal End to request that we sing it - and can still be heard to this day (starting 'My girlfriend Belinda' - incorrect; should seemingly be 'My sister Belinda' - and ending with repeated chants of 'THE THISTLE'). 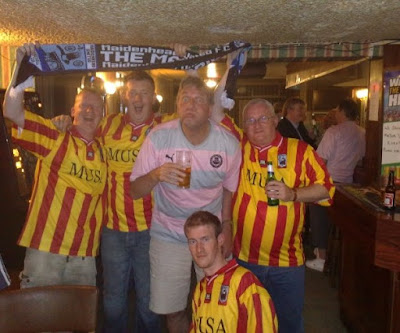 ^^^ Fanfreundschaft was enhanced when a group of Partick fans came down to York Road for our pre-season friendly with Hayes & Yeading in the summer of 2009. Some of them were photographed, above, post-match in the Anchor. Wearing their Thistle replica shirts? Nope! Believe it or not, they're actually wearing Maidenhead United shirts. In fact, it is the Magpies fan in this photo - Bobby P - who is wearing a Jags top! 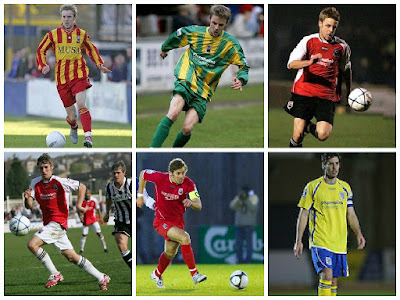 ^^^ Maidenhead United's away kit, for a time, was all blue. M@rl*w blue. Imagine that! Akin to Celtic having a blue away kit. Or Aston Villa. Or Liverpool. Ridiculous. Sometime around 2004/05 a group of supporters arranged for the purchase of a red and yellow kit, a la Partick Thistle, with MUSA emblazoned across the front (the league, apparently, wouldn't allow for individual shirt sponsors). I thought it was brilliant. Perhaps unsurprisingly, however, the powers that be soon supplanted it with an inexplicable green and yellow design. Yuk! #awaykitabominations It is my understanding that the original constitution of the amalgamated football club stated the colours were to be black and white, with red. Apt, therefore, that red once again became our away colour for the (ultimately successful) season in the Southern League. Lamentably, we have since changed to yellow and blue; Slough Town colours. Would Oxford United's rivals - Swindon? - wear yellow and blue? More fool them, if so. Back to square one, methinks, and so time to revive the Thistle kit! I'd buy it ... particularly as the replica version I've got was already MUCH too large for me when I was more than a stone heavier! #tent 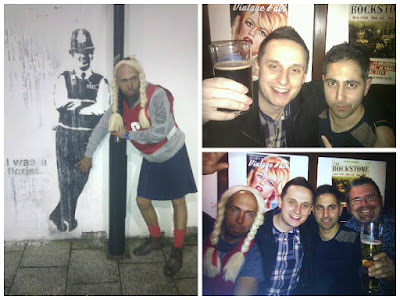 ^^^ The joke was that Macleod (M) had never seen a football game at Eastleigh FC, despite having played there himself. It wasn't for a complete lack of trying. The above photos were taken during LCG Dave's stag do in February 2014. The plan was to train it down to Southampton, watch the lunchtime kick-off - Liverpool vs Arsenal - on TV, and then make our way over to Eastleigh for their match-up with Berkshire's finest (Maidenhead United, obvs, although funnily enough there were some Reading FC fans on the stag). Despite glorious sunshine come 3pm, heavy rainfall in the preceding days meant that the Conference South fixture was called off long before Arsenal's embarrassing capitulation. Instead, we would spend the afternoon watching Southampton vs Hull City - live on Bulgarian TV - in a pub not far from St Mary's. I think that the Reading fans were particularly disappointed by the postponement. 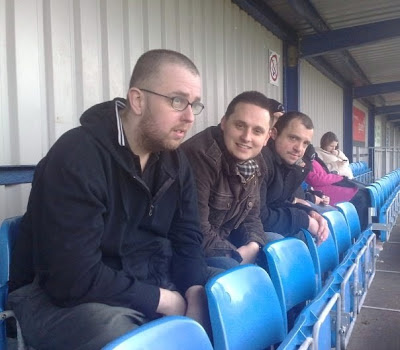 ^^^ I'd already seen football at Eastleigh. More than one game, in fact, although our 0-0 draw there in February 2009 sticks in the memory … for all the wrong reasons! THE dullest game I've ever had the misfortune to witness (we were stone cold sober, which certainly didn't help!); Macleod (C)'s face, above, rather sums it up. He reckons, though, that he's since seen a worse game. Guess where? Firhill; home of the Jags! Celebrating Paddy's 50th birthday, with corporate hospitality, at Partick Thistle vs Greenock Morton in November 2010. Macleod (M), who was also there, summarises the game as follows: 'Goals nil. Entertainment nil. Excitement nil. Goalmouth action nil. Skill nil. Corners … probably nil. Throw ins … possibly a couple'. He wasn't at the Eastleigh bore draw (banned?). As aforementioned, though, despite never having seen a football game at the Silverlake Stadium … 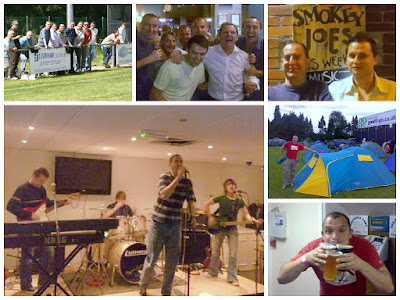 ^^^ ... he had played there himself! Fronting Ye Gods! at the Solent Cougars Scooter Rally on 28th July 2007 (which included camping at the ground). We had enjoyed a truly legendary night out in Plymouth, earlier that month, following our pre-season friendly with Jim Parsons' Plymouth Parkway; remarkably little or no hangover, the next day, despite drinking through the night (hitting Union Street - after a visit to their Smokey Joe's ... and Bobby P mistaking a police car for a taxi! - gone 4am). The post- Scooter Rally hangover more than compensated, however, as it was one of the very worst of my life (so far). I remember us all sitting with our heads in our hands, literally, at a McDonalds on the way home. 14th July 2015 - Eastleigh vs Partick Thistle (skippered, it should also be mentioned, by ex-Magpie Abdul Osman) - would, coincidentally, mark exactly eight years since that night in Plymouth. #writteninthestars 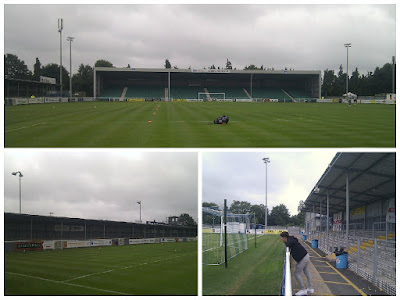 ^^^ Macleod (M) picked me up from the office. He was also giving a lift to Steve H and the aforementioned Brian. Topics of conversation, on the journey down the M3, included the following Fs:

Anyway, Eastleigh's ground has changed significantly - almost beyond belief - since I last went; not least the stand behind the goal, opposite the clubhouse. Looks quite smart, TBF, although how permanent it all is remains open to some debate ... 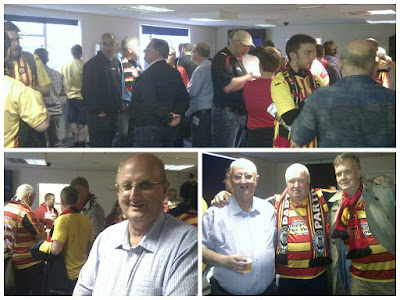 ^^^ Plenty of time for pre-match beers. The away supporters were setting the pace; I was in danger of being 'blootered' before kick off! Many more Thistle fans than I was expecting; red and yellow everywhere! A mixture of hooped and striped shirts; I was surprised to learn that the former are more traditional. 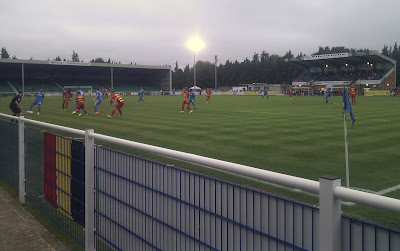 ^^^ First half match action. Now, we've seen a few games in Scotland (mainly East Stirlingshire, admittedly) and have always been distinctly underwhelmed by the quality. As such - and even allowing for the fact that the SPL starts earlier, so Partick were presumably further along in pre-season - I wasn't expecting the Scots to completely outclass Eastleigh, as they did in the first 35 mins or so. The home side barely had a kick. Literally. Thistle took the lead shortly after I'd remortgaged my house to buy a burger (not bad, TBF). Abdul started the move. Obvs. #learntthatatmaidenhead The Jags number 7 - new signing David Amoo - was the best player on the pitch and it was 0-2 on the half hour when his right-wing corner was headed in, emphatically, by a 'big fucking Belgian' (the Mertesacker-esque - in a good way - Frederic Frans). James Constable threatened for the Spitfires, just before the break, but Ben Strevens was overrun in midfield and Yemi Odubade could only be cheered by the fact that, for once, he wasn't the smallest player on the pitch! Brian had earlier lamented the recent loss of some of Thistle's best players - including their keeper to Ross County, outstanding wing-back Stephen O'Donnell to Luton Town, and loanee striker Lyle Taylor - but Callum Booth and Sean Welsh remain, and both also impressed. The aim, apparently, is to avoid relegation. On this evidence, they will. 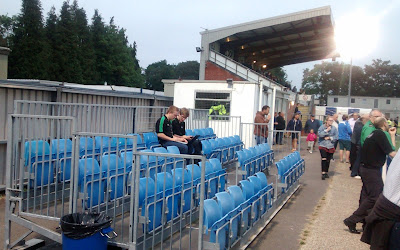 ^^^ Half time. While Brian, Steve H and yours truly retreated to the bar - where I happily discovered that Gav Villa had become a father to a baby girl, and was mocked for asking what Brian would like to drink (in my defence, Fosters wasn't available!) - Macleod (M) toured the ground. Anyone recognise these seats?? 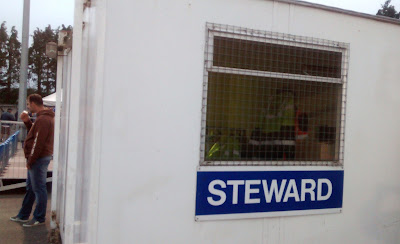 ^^^ One steward was an absolute spit of Rasher. Yeah, I know. Another assumed that I was Scottish and spoke to me at length about his uncle - Bob Laird - having written a book on Third Lanark. 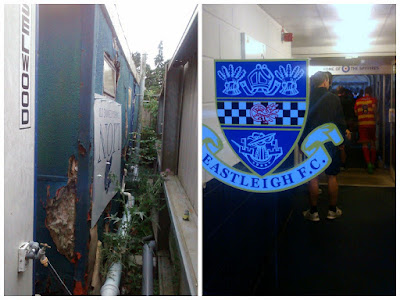 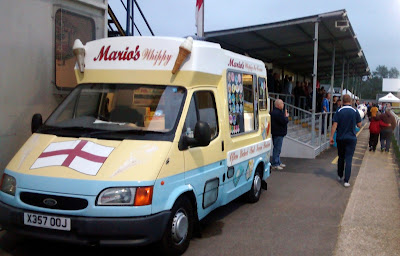 ^^^ After an 'interesting' conversation with a tattooed, flat cap-wearing Greenock Morton/ Celtic 2CW - and having 'IN-GER-LUND, IN-GER-LUND, IN-GER-LUND' chanted at us by the handful of vocal home supporters in the stand (above) - Steve H and I each enjoyed an ice cream at the start of the second half ... as the rain got heavier! 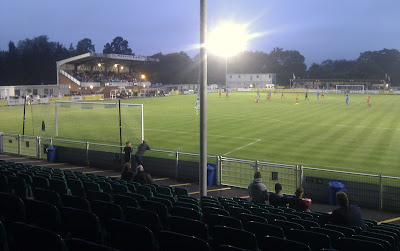 ^^^ Second half match action. Rather yawn inducing; wholesale changes resulting in typical pre-season fare. Eastleigh substitute Josh Payne - whose generosity, in January, enabled the wife and I to see Woking vs Bristol Rovers for free - showed some silky skills, whilst the Spitfires #20 (Jack Masterton) looked about twelve. 679, apparently, were there. Nothing much else of note. I took to twitter to pass the time ... 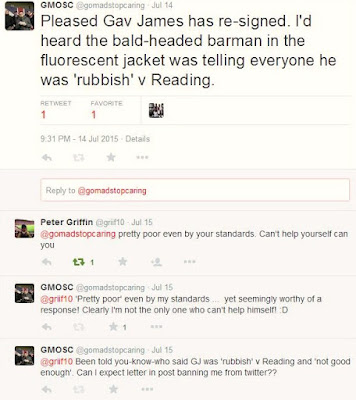 ^^^ If my information is proved to be incorrect then I will, of course, apologise … like the Chairman did to me, once, via Direct Message on the club forum:

BASELESS ACCUSATION:
'Your access will be removed if you keep opening new accounts and posting previously removed material'

SUBSEQUENT APOLOGY:
'I apologise in this case for wrongly accusing you'

(The Magpie Webmistress was - quite obviously - guilty, not me; I didn't sign up for the soon-to-be register-to-view forum, in any case, and instead started this blog.)

I'm also reminded of the time when Mark Steward, himself, felt the need to apologise after it came to light that MUSA money specifically donated to properly repair a hole in the old stand roof was instead spent on something/ someone else (MS nailed down a bit of wood, claimed that he'd paid a local handyman to do the work, before admitting the truth when unable to provide an invoice or receipt #botchjob). 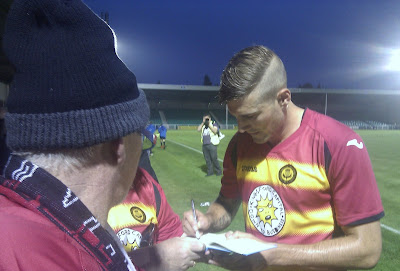 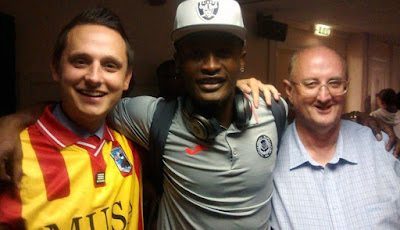 ^^^ Abdul was, near enough, the last Thistle player into the bar. When he did finally appear, though, he was straight over for a photo (inadvertently doing a Tardif/ Tiryaki; acknowledging the fans of his former team before those of his current). 'What the ... ' he mouthed, shaking his head, after realising that my red and yellow striped shirt was a Maidenhead United one. 'Is Carl Taylor still there?' LOLz. Good lad as well as a good player - much taller than I remembered, with added muscles - and I wish him all the very best. 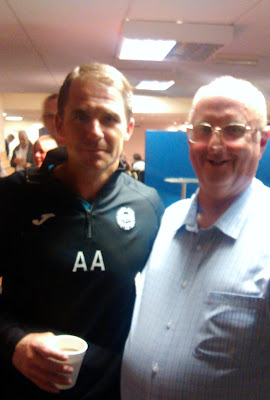 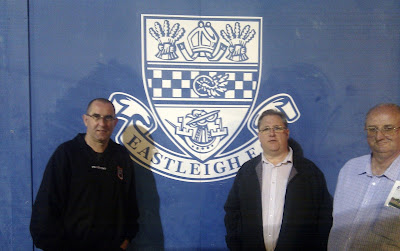 ^^^ As we headed for the car, a member of the Jags management staff, walking behind us, belatedly realised that he was going in the wrong direction (away from the team coach). 'Where are you staying?' asked Macleod (M). 'You can have a lift'. 'Bisham Abbey,' came the reply. Less than 15 mins drive from York Road! We laughed. Apparently PTFC had initially intended another friendly, down south, and had tentatively enquired as to whether Maidenhead fancied a game. Alas, we were already committed to hosting Barnet - zzzz - on Saturday 18th. A real shame. Maybe next year. Soggy Sombrero would definitely get an airing!

THE THISTLE!
Posted by Lenny Baryea at 20:40