^^^ Two blog posts for the price of one! I would have written this sooner (possibly) but it's taken me that long to get over ... nah, I can't even bring myself to say it! 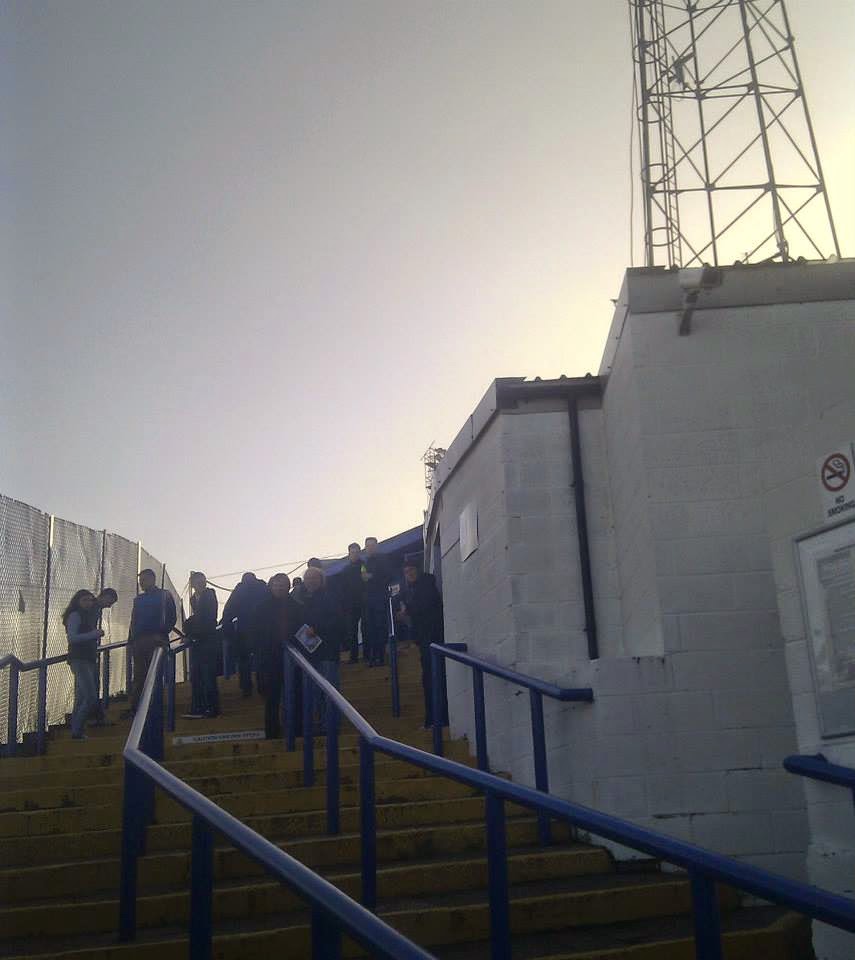 ^^^ A few of us (odds and sods) were supposed to be journeying down for Portsmouth vs Exeter City - by train - to celebrate Willie's upcoming birthday. Come the day, however, everyone bar him and I had pulled out ... and, owing to illness, he wanted to drive. Fair enough. I suppose. It was pouring with rain as we parked up, close to the ground, on Edgeware Road. A ten mins or so walk to the Artillery Arms, where we were to collect our tickets from a member of the Exeter Exiles. The pub was absolutely packed. Newcastle took the lead against Chelsea, on TV, as we I supped on Kronenbourg 1664. Hehe! (as they say in Strasbourg?)

It had stopped raining by the time we approached the away end at Fratton Park. Macleod (M) had been before, to watch Leeds, and given me an impression of what it (the away end) was like. I was reminded, a bit, of Boothferry Park (while "York Road with seats" is how I would describe it when 'checking in' on Facebook). "I'm definitely coming here to watch Rovers" I said, naively assuming that the Gas' visit in April would be a mundane, end-of-season, nothing-to-play-for affair enlivened only by the rampaging West Country hordes ... 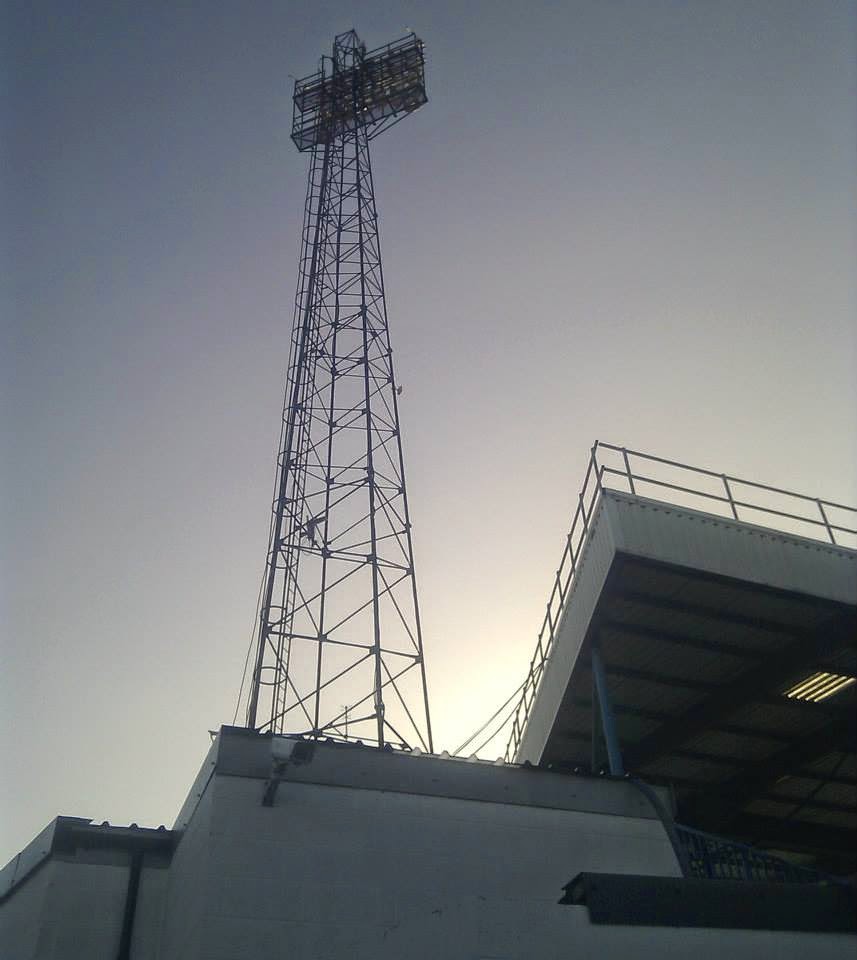 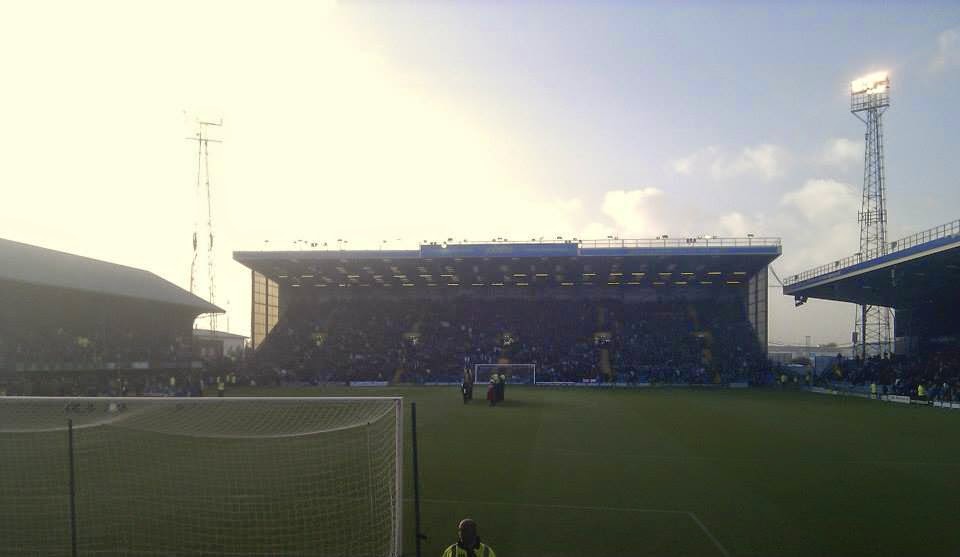 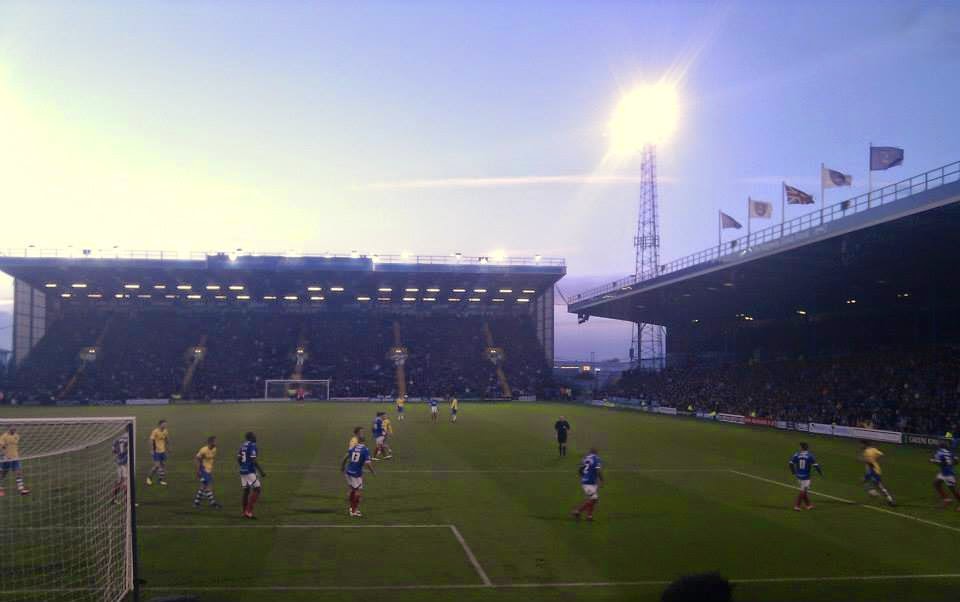 ^^^ Match action. A dire spectacle. The strong wind, blowing towards us, was a big factor TBF. It certainly accounted for the opening goal, just before half-time, when a cross was carried over the head of the visiting keeper. The fortunate scorer? Macleod (M)'s old friend, Ricky Holmes! The impressive Ryan Bird - formerly of Burnham - then scored a couple of headers (the second a really good one, following a purposeful run and cross from lively substitute Andy Barcham). 2-0 down just after the break, I thought Exeter should have thrown caution to the wind - particularly as it (the wind) was in their favour! - yet Paul Tisdale waited until after Portsmouth's third goal, around the 70 min mark, before making any changes. Only after former Bristol City 1982 Ltd and Bristol Rovers defender Danny 'Corona' Coles had - out of nowhere - pulled one back did Exeter (belatedly) give it a real go. They bagged a second with less than ten mins remaining - and Portsmouth were on the rack at the very end - but, ultimately, it was too little too late. A missed opportunity, IMO, and back-to-back defeats for the first time in the campaign. Sadly for the Grecians, a sign of things to come ... 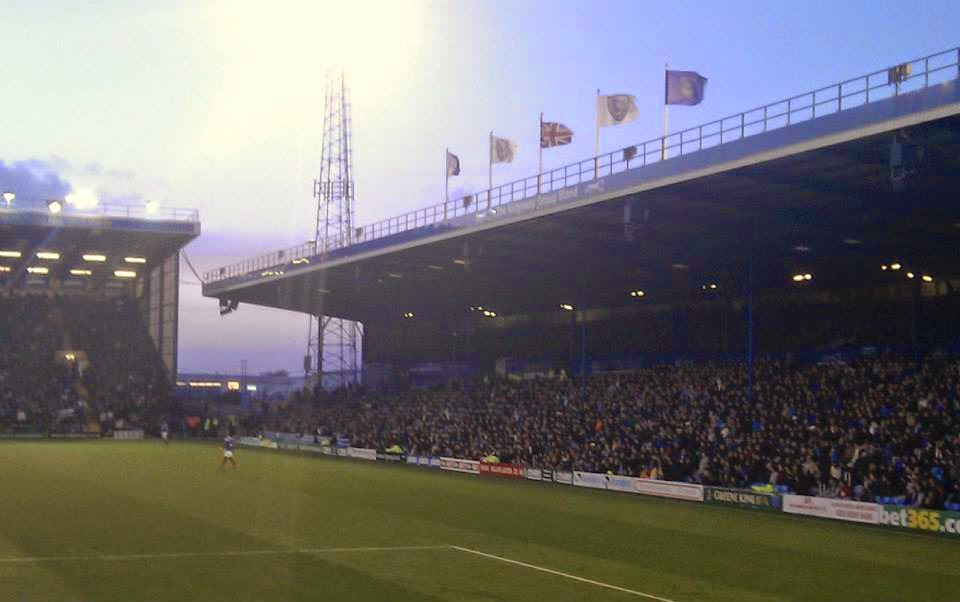 ^^^ A small group of blokes in fancy dress were sat in the very front row of this stand. I appreciate that you can hardly see them (if at all) in this photo but, trust me, the Honey Monster was a truly eye-catching costume. 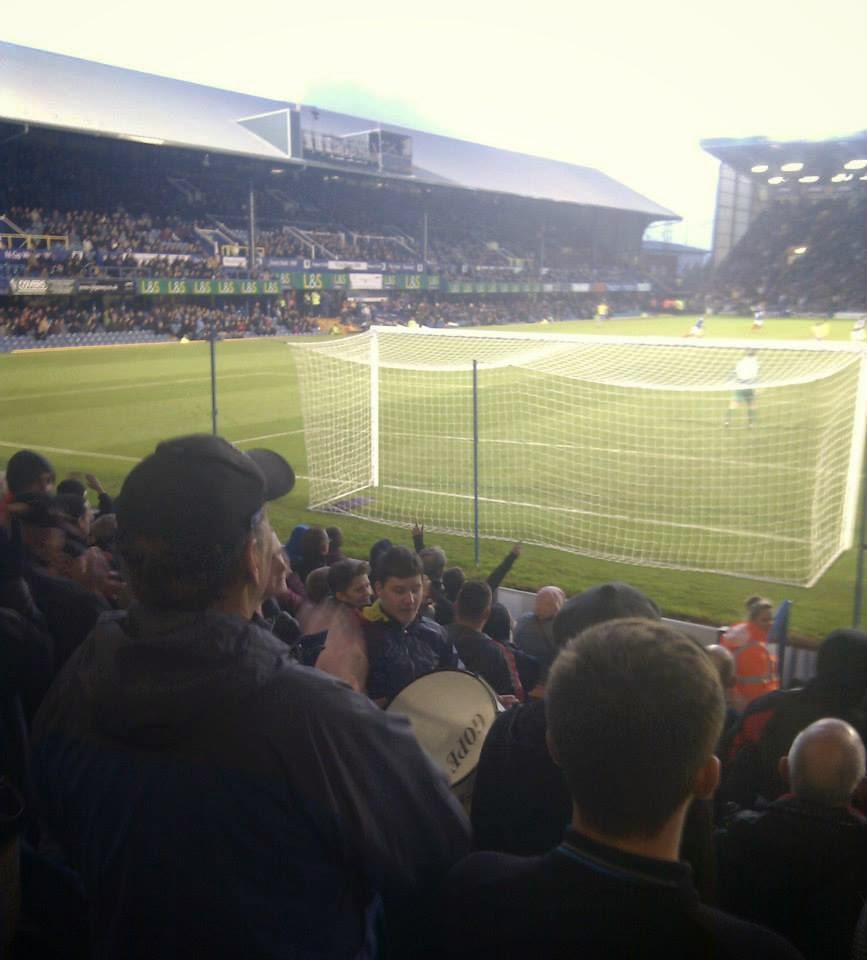 ^^^ Drums at football? Down with this sort of thing! TBF, the travelling fans (who filled up about a third of the away end) did make themselves heard, particularly when commemorating their late striker Adam Stansfield (who we had met on Willie's stag do; nice guy). 3-2 the final score. 16,168 saw it. 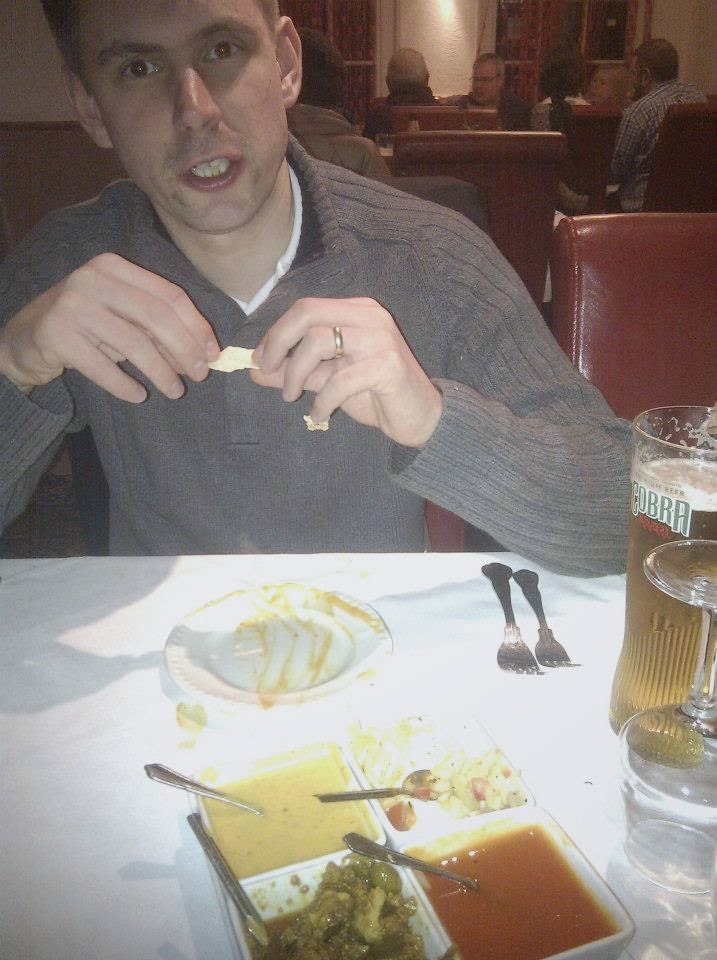 ^^^ Radio commentary of Arsenal 2-0 Liverpool in the car, during the return journey ("If Aaron Ramsey stays clear of injury, then Arsenal will win the league"), before visits to the Pond either side of a (very rushed) curry in the Bouchra. TBF, they did us a favour by squeezing us in. Willie re-paid them by destroying yet another tablecloth. In the extremely unlikely event that his wife is reading this, incidentally, then I must stress that he WASN'T drinking. The Cobra pictured above was mine. Honest.

I rather dislike the phrase 'sleeping giant', but genuinely believe that it can be applied to both Bristol clubs. Rovers have been shambolically-run (understatement alert!) for many years - check out how many managers they've had, in recent times, and bear in mind that last season's playing budget was apparently bigger than a couple of Championship sides - but they weren't really going to drop out of the Football League. Were they? 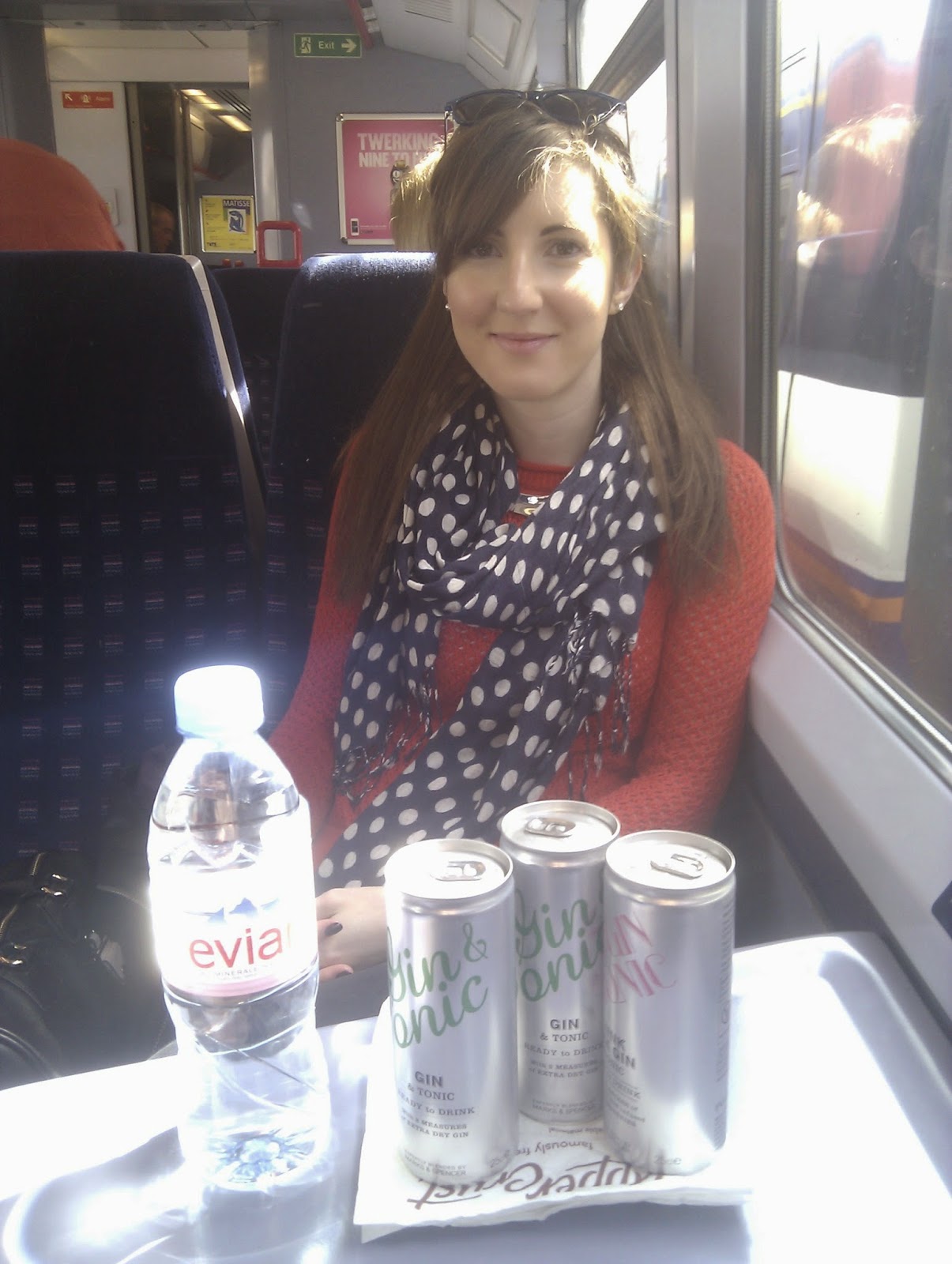 ^^^ Unlike Willie, the wife was more than happy to let the train take the strain. Good girl. She has previously accompanied me to Rovers games at Brentford (lost 1-0) and Oxford (lost 3-0). In hindsight, I really should've seen what was coming! To confirm, neither the water nor the ready-made M&S cocktails (shown above) were mine. Honest. 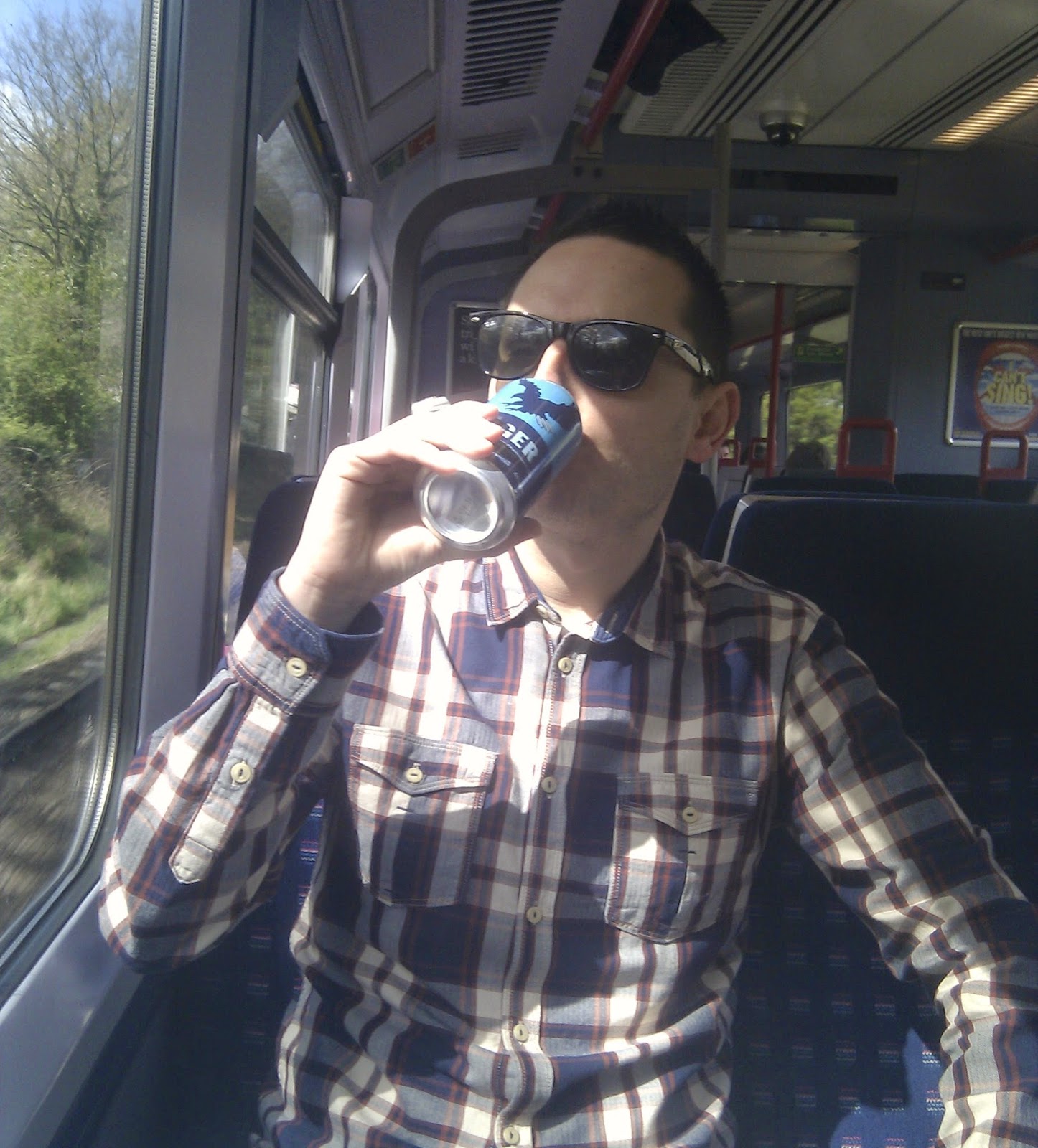 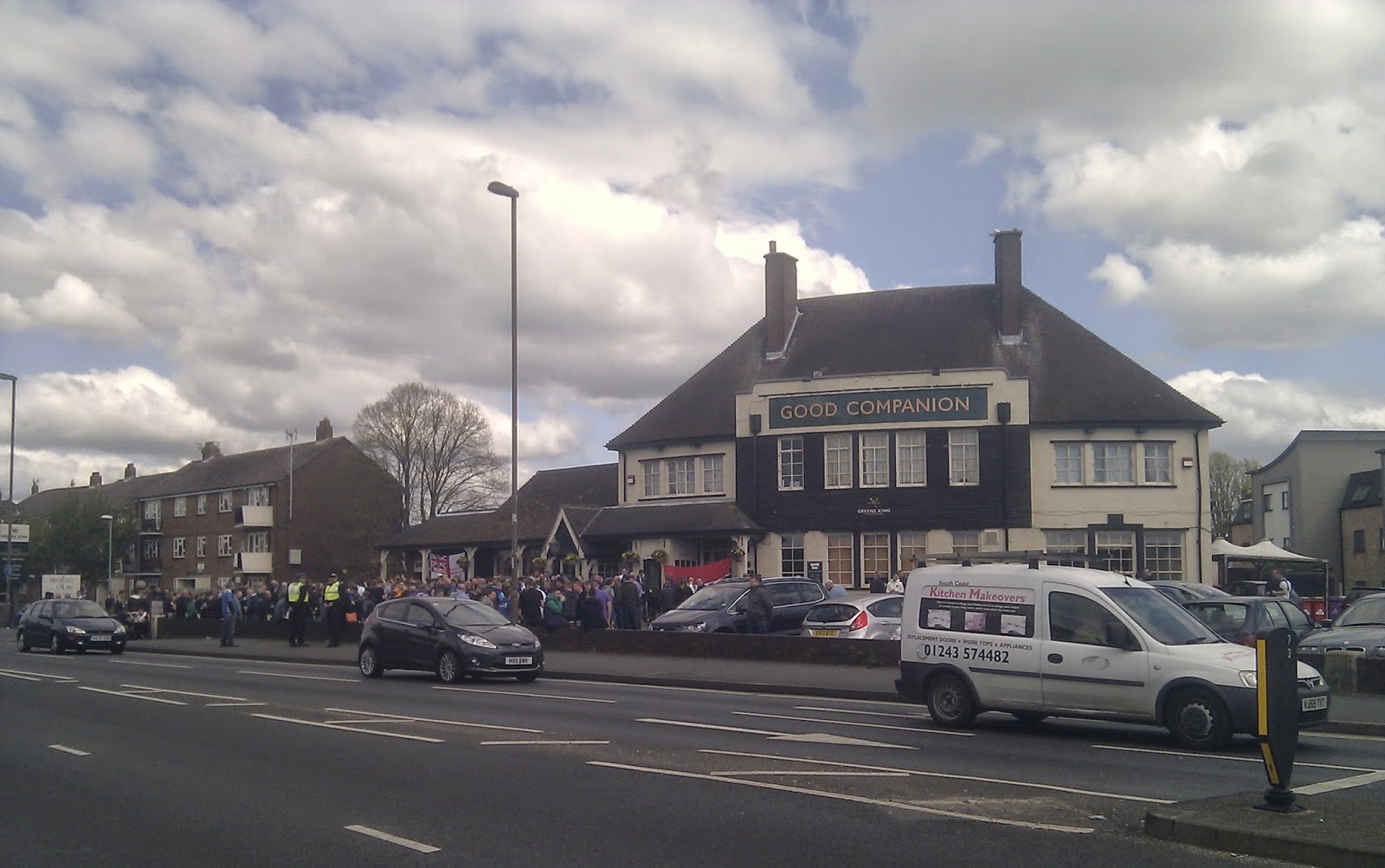 ^^^ As we waited to change at Guildford I shared, on Facebook, the photo I had taken there - earlier in the season, en route to Gosport - of a certain someone and a (sadly non-soggy) sombrero. It still makes me smile! As did the views from the train as we cut through the picturesque South Downs National Park. We arrived in Portsmouth with plenty of time to spare, ahead of kick off, and so meandered our way - in glorious sunshine - to the Good Companion (as suggested by an Avon & Somerset Police Liaison Officer on Tw@tter). It was packed - both inside and out - with Rovers fans (queues for the gents, blokes in the ladies toilets etc) and the atmosphere was electric ("Goodnight Irene" reverberated throughout). I was reminded of the (now infamous) FA Cup tie between H*sh@m and Maidenhead United in November 2007. We had travelled in (relatively) huge numbers and the pub directly opposite their ground (the Queen's Head?) was spilling over, pre-kick off, with Maidonians. You could barely get through the doors, so the KSG went to the off-licence across the road and came back with a crate of lagers to drink outside! Memorably, an old boy showing off in his classic Ferrari convertible was left as red-faced as his car when it conked out - loudly and seemingly in slow motion - as he drove past the throng. Superb! We all deserved so much better that day than the lifeless display offered up by Drax and the boyz. It's hard to forgive and forget. Hey ho, back to Portsmouth and 2014 ... 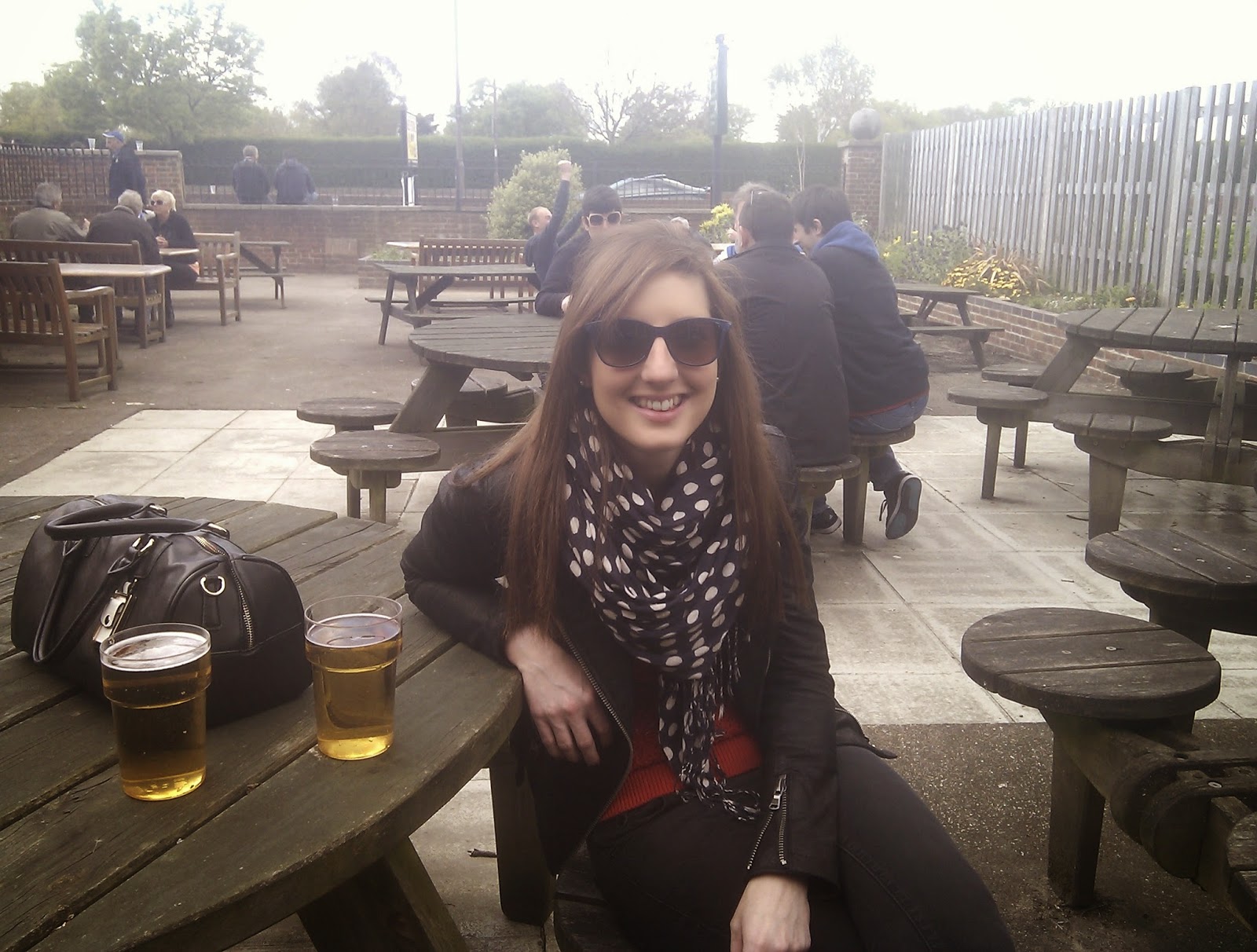 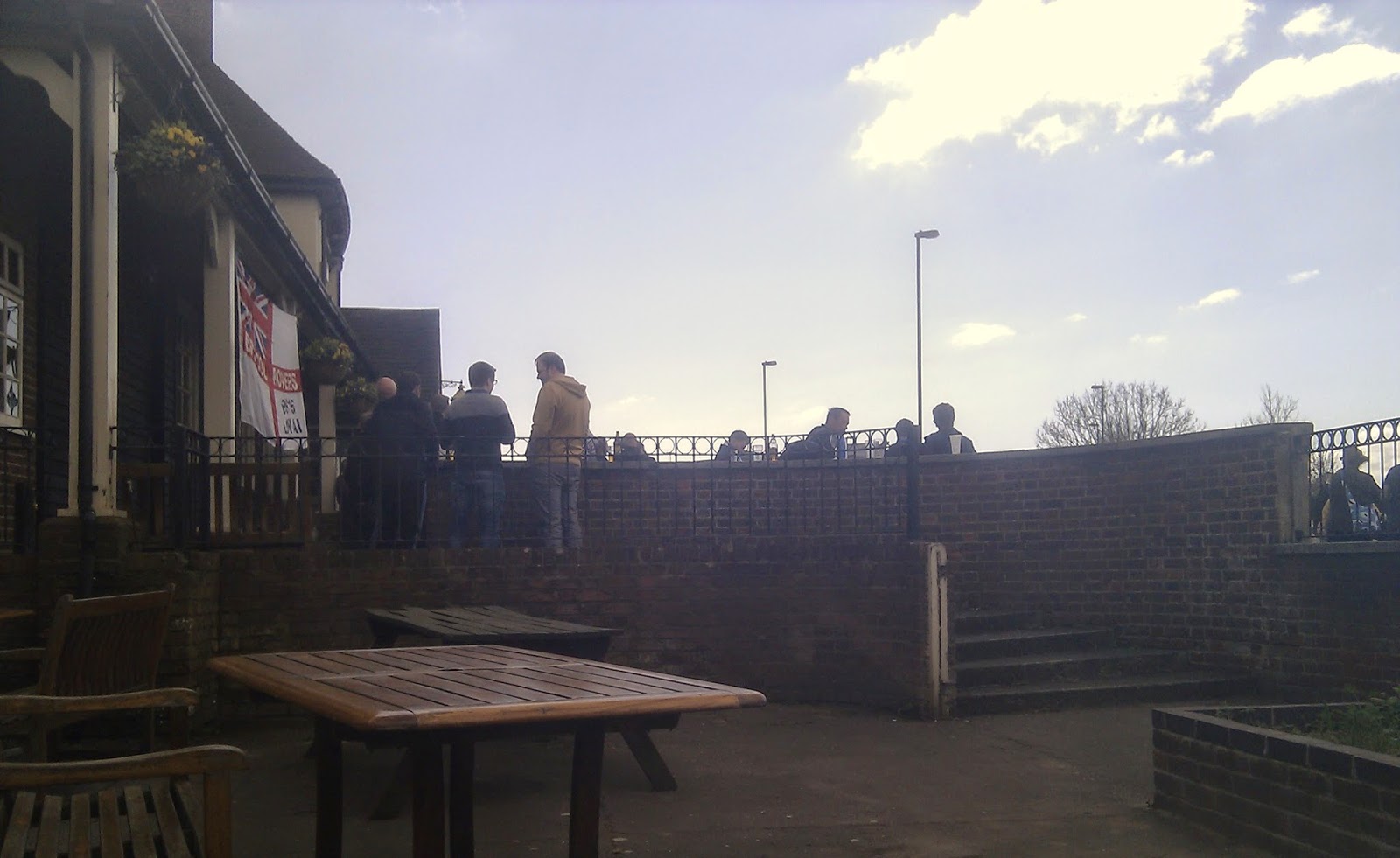 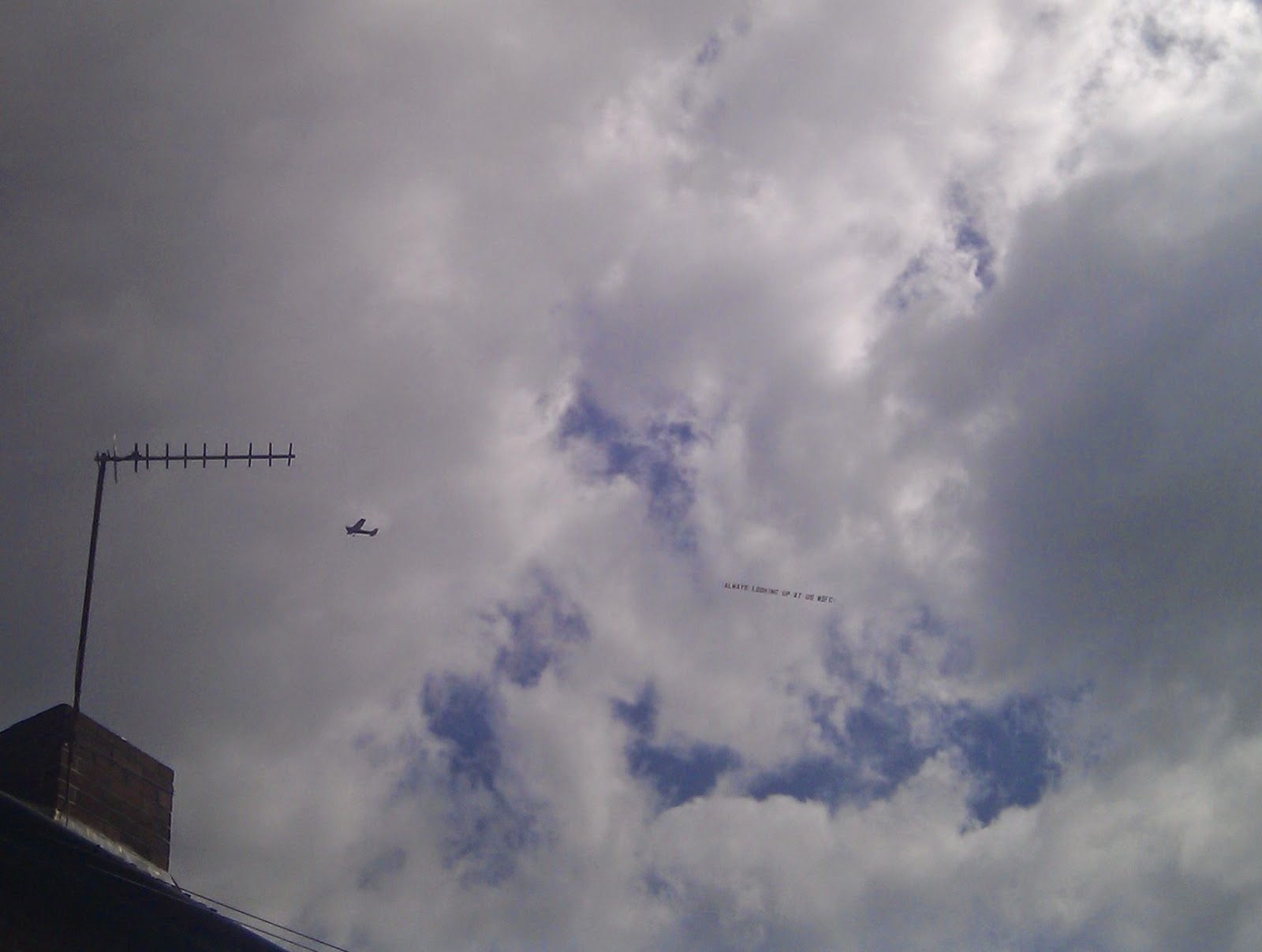 ^^^ "Forever Looking Up At Us - SAFC" read the banner, flying overhead. Bristol City 1982 Ltd fans are apparently thinking of organising something similar for the first Rovers home game of next season. [sarcasm font] Hilarious! [/sarcasm font] 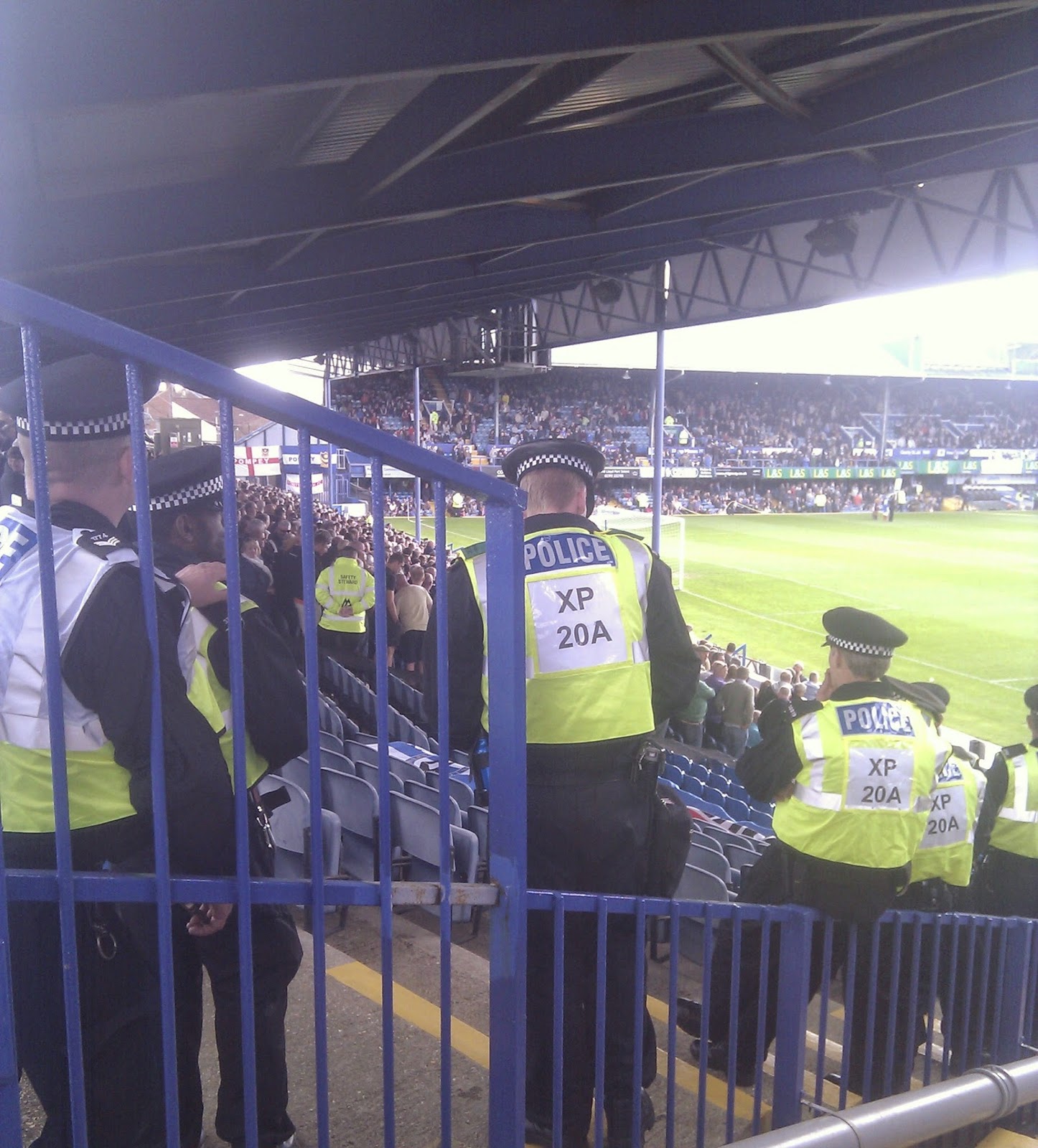 ^^^ Unlike the aforementioned Exeter game, the away end was (very) close to capacity. Officially 2,300 were in there. I reckon it was more. 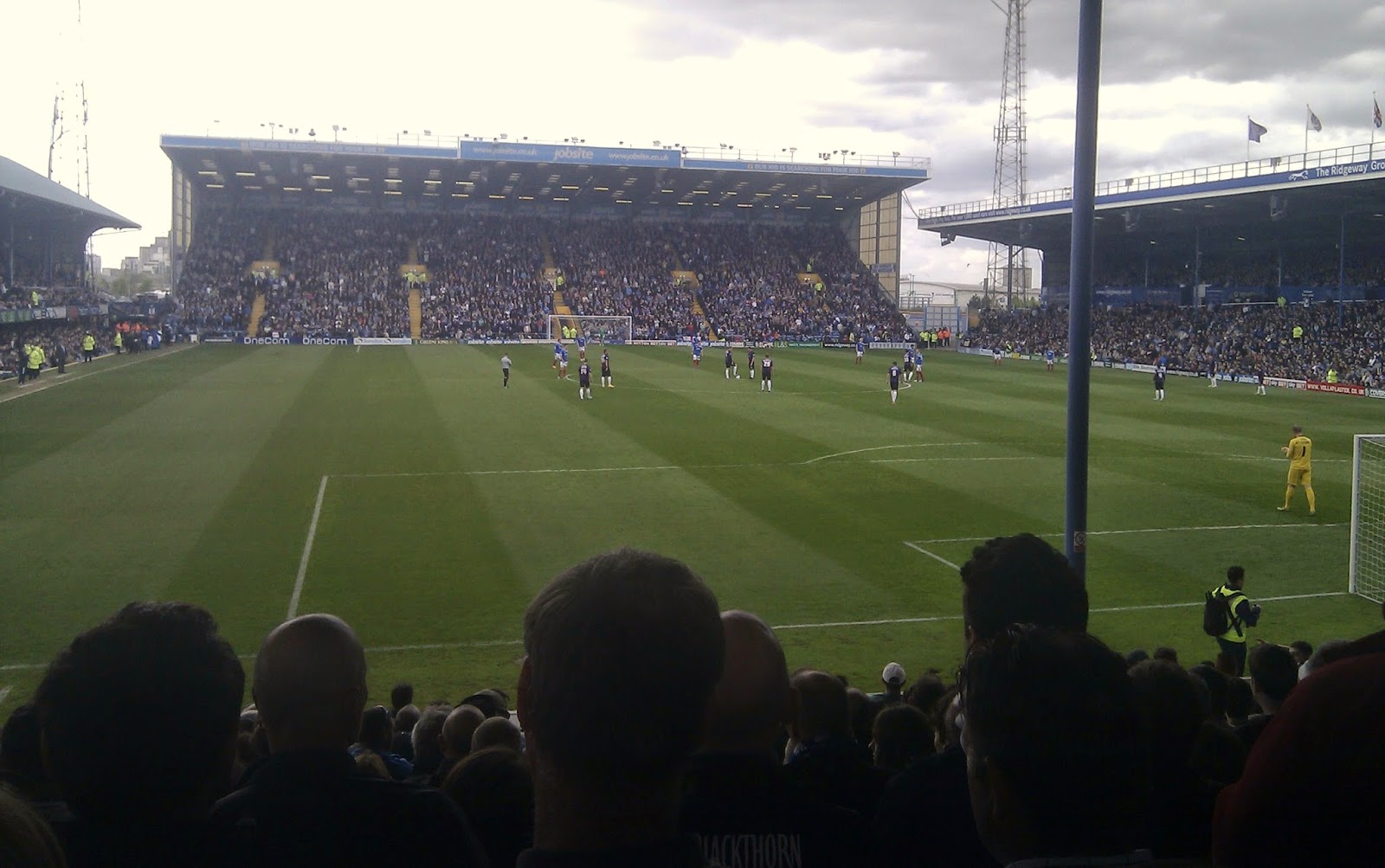 ^^^ Match action. Rovers - undoubtedly hampered by early injuries to Danny Woodards and Michael Smith, and with top scorer John-Joe O'Toole only on the bench - attacked like Liverpool but defended like Hartlepool ... Reserves. 2-2 at the break, with Portsmouth centre halves Bondz N'Gala (recently released??) and Jack Whatmough (nicknamed 'Surf Dude' by the wife, just 17 years-old and an England U18 international) the stand-out performers. As I visited the York Road-esque toilets at halftime (where a group of cap-wearing smokers were already planning - with a glint in their eyes? - trips to Grimsby and Lincoln) my expectation was for a Rovers onslaught in the second period, shooting towards the away end. I should have known that I would be disappointed ... 3-2 the final score (again!). 17,998 saw it. The away fans had been noisy throughout and chants of "We are staying up" rang out - defiantly - at the final whistle. I, conversely, had been fearing the worst since the 2-1 home defeat to bottom-of-the-table Torquay United, the previous Saturday, and this display - not a bad one, per se, but ultimately fruitless - did nothing to dispel my gut feeling that Rovers were in big trouble. They had been the better side in the first half, yet shared four goals. Portsmouth had edged the second half and won it 1-0. The Gas certainly didn't lack effort, but were bereft of creativity in midfield and pace upfront. They also conceded sloppy goals. A recipe for disaster, IMO, but the general consensus in the away end seemed to be that they'd have (just) enough to survive. Subsequent results might indicate that the players felt the same way ... 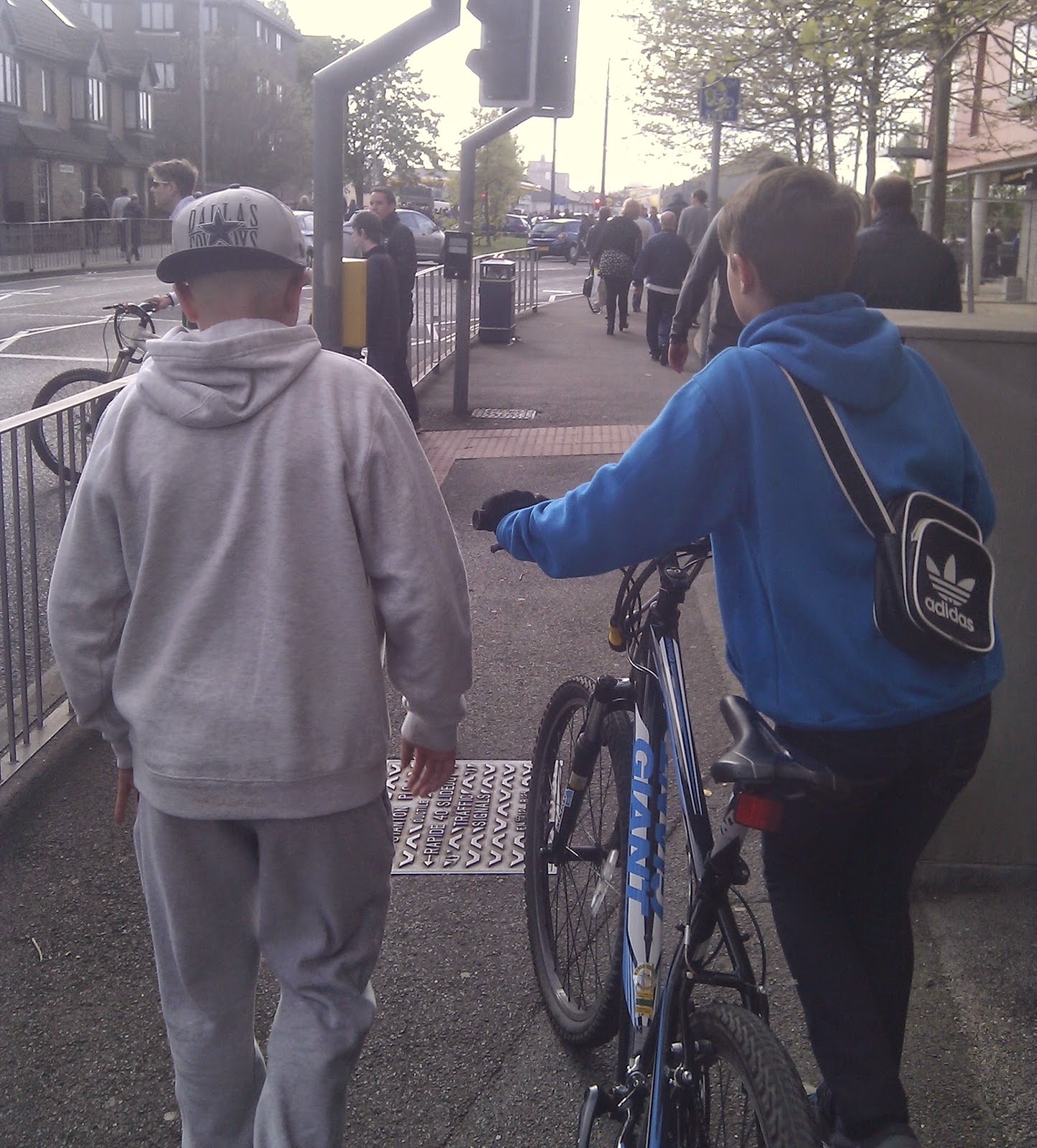 ^^^ How bout dem Cowboys! At this point, walking away from Fratton Park, I was having to come to terms not only with the Rovers result but also news that the Magpies had lost 3-0 (three-bloody-nil!) at Farnborough. Under a 'Second half capitulation puts Maidenhead United on brink of relegation' headline, the Advertiser put the result into some context -

"Farnborough, realistically safe from going down, looked complacent and vulnerable in the first half and, with only three players on the bench, they looked like a side who had started their summer break early." 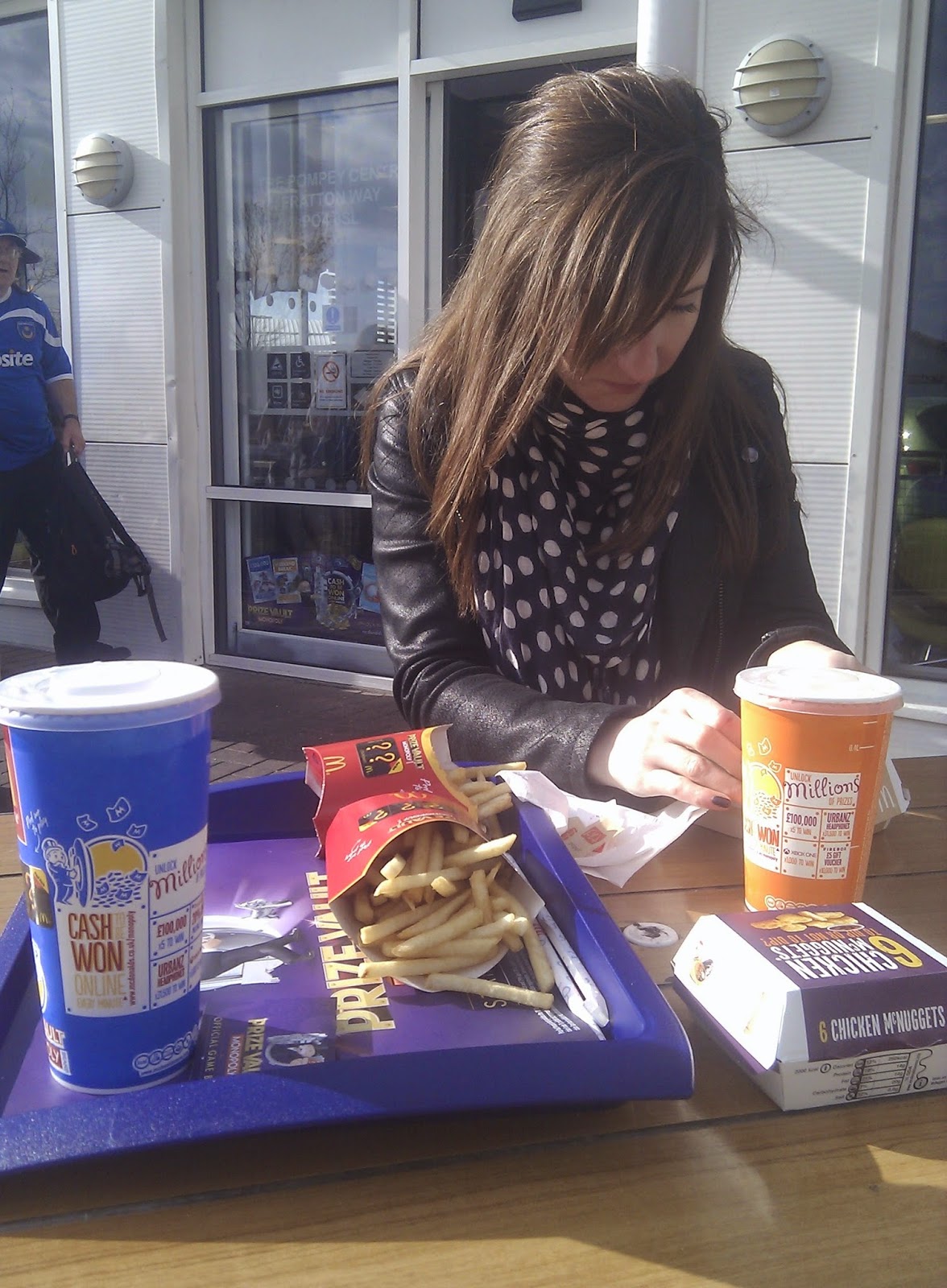 ^^^ Drowning my sorrows with a large 7UP at McDonalds. The home fans were happy; their fifth successive win under caretaker manager Andy Awford meant that they were safe. Lucky them. 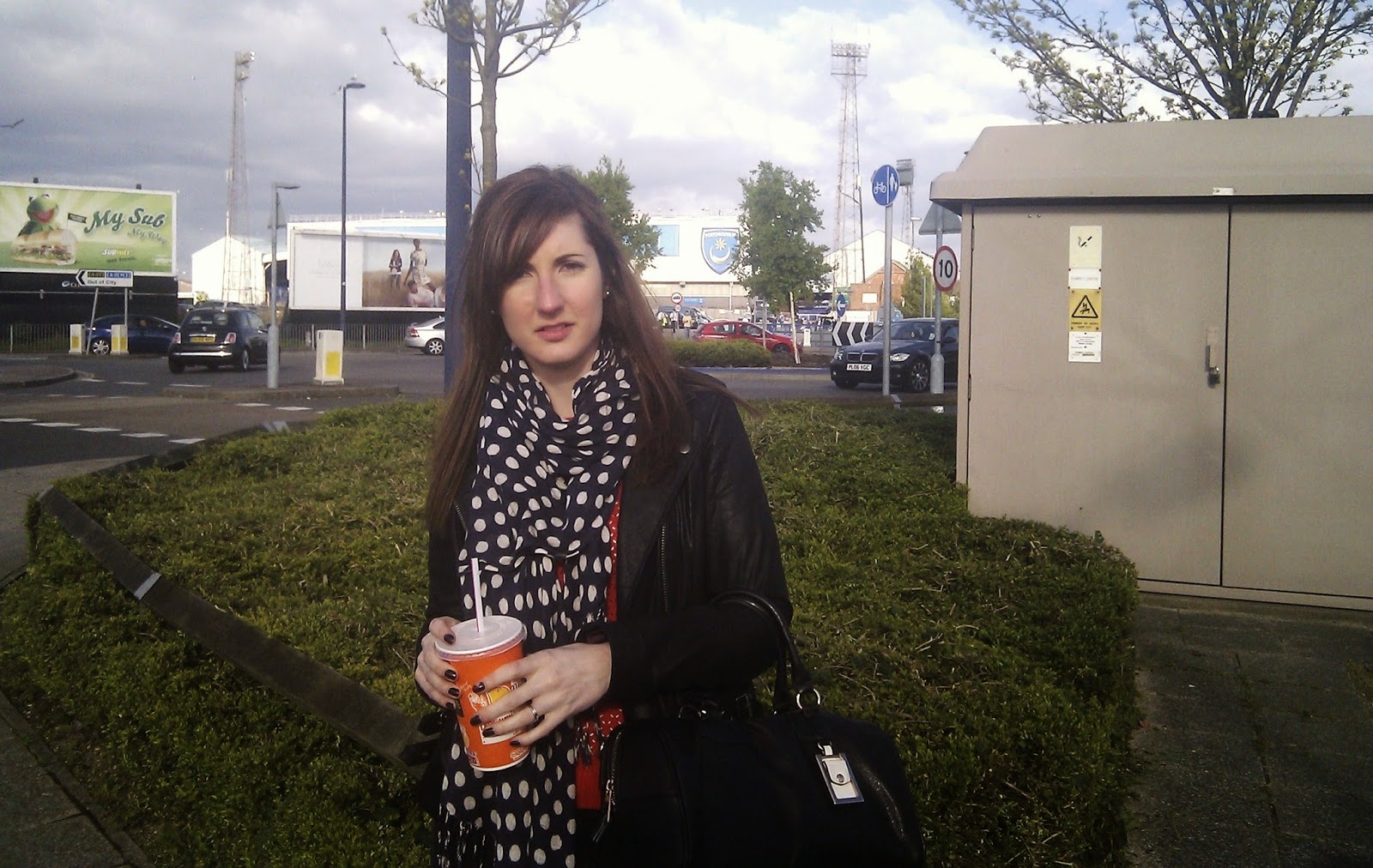 ^^^ Portsmouth 3-2 Bristol Rovers and Farnborough 3-0 Maidenhead United starting to sink in? Or thoroughly fed up of me, stopping to take photos? Probably Definitely the latter. 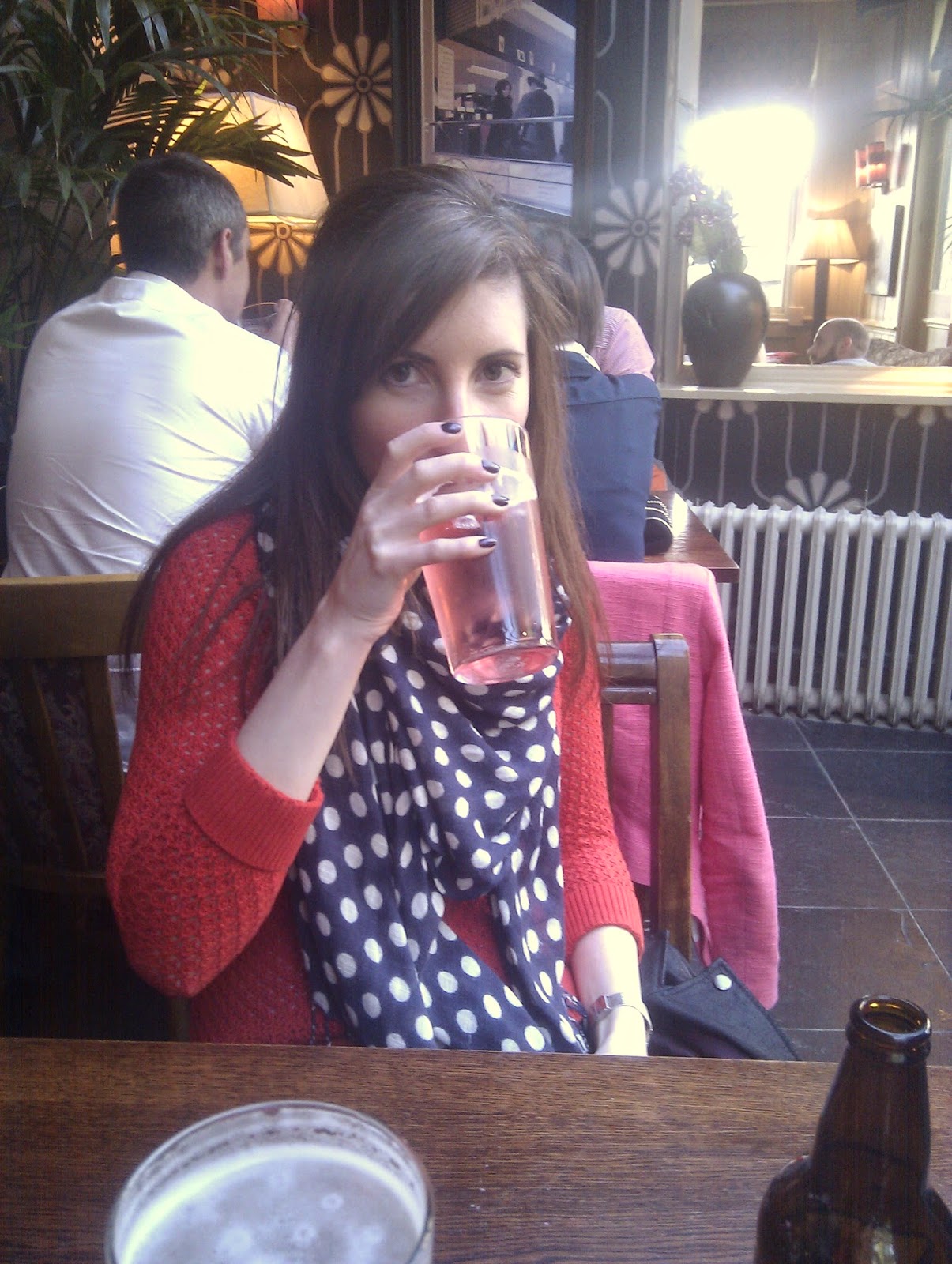 ^^^ Back to Guildford and the White House, a decent Fuller's pub next to the River Wey. The wife would be cheered by a bottle of Wild Berries-flavoured Rekorderlig, your's truly by news that Chelsea had lost at home to bottom-of-the-table Sunderland! ("That, Jose my glorified translator friend, is a specialist in failure!") 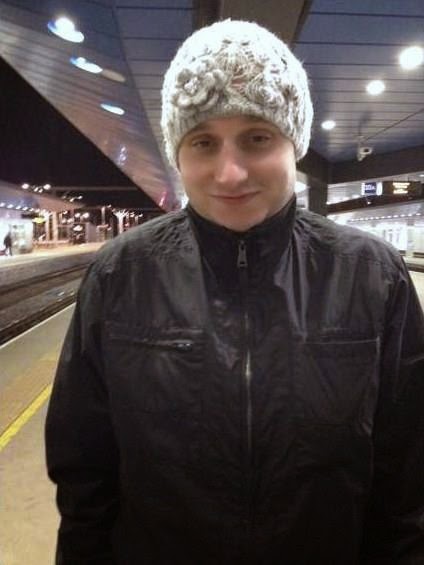 ^^^ After a reasonable meal at the large Pizza Express on the High St, then a sprint across town, we missed our intended train by less than a minute. The wait for the next one - plus a flat can of lager that I shoudn't have bothered with - probably explains the look on my face. That and the plummeting temperature (hence my borrowing of the wife's woolly hat). Oh, and the MMS singing Maidenhead songs at Reading station (en route from Farnborough?). "Hope they're as vocal at Stortfort next Saturday" I wrote on Facebook. As if.

Did someone say good day(s) out ruined slightly stained by 90 mins of football? #whosyourfavouritenonleagueteam? :-(
Posted by Lenny Baryea at 21:30 No comments: