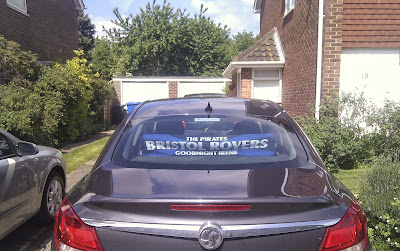 ^^^ I'd seen Rovers three times in the flesh, during the 2014/15 season, ahead of last month's play-off final at Wembley: two 2-0 defeats at Barnet and Braintree - the former with Macleod (M); the latter with Dickie W, Steve H and Macleod (M) - and a 0-0 draw at Woking with the wife. Nb. Rovers only lost five league games all season! Willie T - locked out at Woking - would be accompanying me to the national stadium. Would the Exeter City/ Maidenhead United 2CW - who has previously tasted both defeat and victory in this nerve-wracking, end-of-season showpiece - be a good luck charm? I sincerely hoped so, as we munched on bacon sarnies in my sunny back garden before the short drive to Beaconsfield station and the 12:09 train. "Who's your favourite non league team?" Willie asked, with the caveat that he hoped it would be the last time he could tease me with this question (I'd relentlessly mocked him, in similar fashion, throughout the Grecians spell in the Conference). "Maidenhead United are my favourite non league team," I responded, without hesitation. "'Who's your favourite Football League team' has been a more pertinent question," I continued. The answer to that? Whichever club was playing Reading. Or Bristol Sh!tty. Or W@nky Wanderers. Obvs. 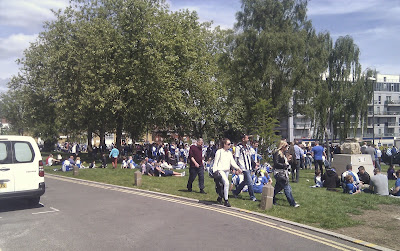 ^^^ Despite understandable consternation re. ticket prices (I couldn't bring myself to purchase the cheap tickets, months in advance, for fear of jinxing things), a record-breaking attendance was forecast. Perhaps I shouldn't have been surprised, therefore, by how busy the train was. Nor that fans of both sides - but particularly Rovers - thronged the route to the Green Man pub. This would be Willie's first visit to the agreeable boozer. I, in contrast, had been several times: most recently before Dallas Cowboys @ Jacksonville Jaguars in the NFL last November; perhaps most memorably before/ after the FA Vase final in 2010, when I was photographed with the SC Paderborn 07 team bus and Northwood Mark (as he was known to us then) with Whitley Bay's victorious manager. 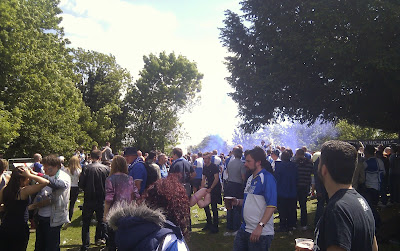 ^^^ The pub was predictably rammed but the bar staff - many resplendent with Rovers motifs painted on cheeks and forearms - were as efficient as ever. Soon enough we were enjoying our drinks (Doom Bar for me) in the sunshine outside. Songs (mainly 'Goodnight Irene', of course), flags, blue smoke bombs, inflatable penises (!) were all on show; testament to the party atmosphere. I've since read that Gas legends Andy Tillson and Dave Pritchard were also at the pub, while the roll call of other ex-Rovers players spotted at the game includes Byron Anthony, Billy Clark, Joe Davis, Adam Dawson, Nathan Ellington, Mike Green, Matt Harrold, Barry Hayles, Ian Holloway, Jo Kuffour, Lee Maddison, Christian McClean, David Mehew, Tom Parrinello, Paul Randall, Alefe Santos, Gary Smart, Michael Smith and Nick Tanner. An impressive number; indicative, I think, of a special football club that means so much to so many. 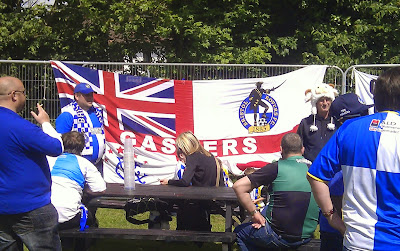 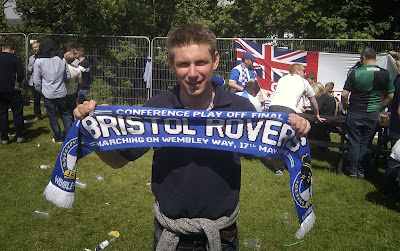 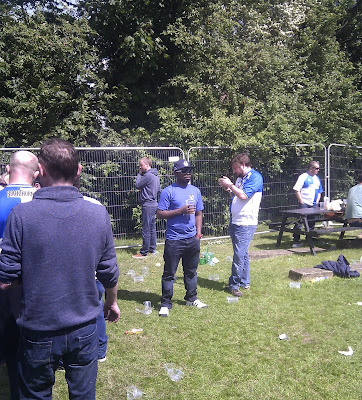 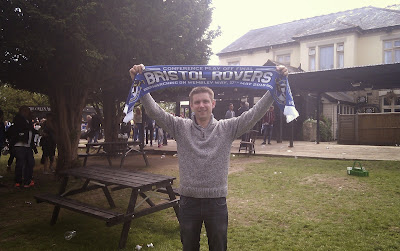 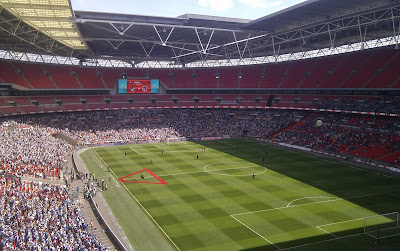 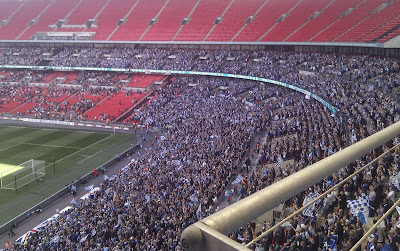 ^^^ Rovers fans. Officially there were circa 28K. 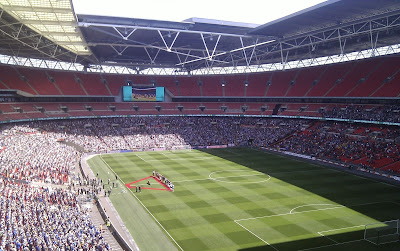 ^^^ Pre match shenanigans: Woy Hodgson shaking hands, the national anthem etc. The game kicked off slightly late. Within minutes, Rovers were one down; the impressive Nathan Arnold allowed to run and cross, with the ball going in off the face of Lenell John-Lewis ('his name is a shop, his name is a shop') after ex-Bath and Salisbury keeper Will 'I wanna dance with some' Puddy had saved with his foot. A defiant 'Goodnight Irene' was belted out - arguably the loudest of the day - but Rovers were rocking and Grimsby could've put the game beyond them in the first 20 mins or so. Puddy - who has never convinced me - looked a bundle of nerves and I had my heart in mouth every time the ball was passed back for him to kick. I actually thought he should've been sent off - rather than merely yellow-carded - when handling outside the box. TBH, the referee had a bit of a nightmare: booking Matty Taylor for diving when clearly ankle-tapped by the Grimsby keeper and also failing to give Town's #6 - Carl Magnay - a second yellow when he wiped out Ellis Harrison. By this time Harrison had thumped home the equaliser from a corner, rashly conceded by the otherwise imperious Aristote Nsiala. Rovers were the better side for the final 15 mins or so of the first half - with Chris Lines and Lee Mansell temporarily wrestling control of midfield from, IMO, man of the match Craig Disley (whom had started ahead of Lines as Rovers beat Shrewsbury Town in the League Two play-off final in 2006/07; a match I attended with the wife and several Rovers-supporting colleagues from the Bank of Ireland, below) - but it was all-square at the break. 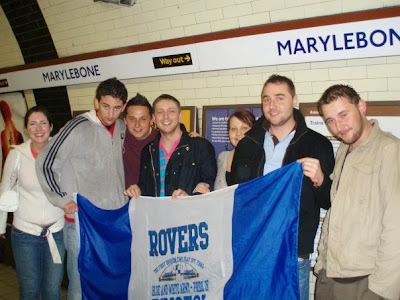 ^^^ Both the second half and extra time were write-offs, more or less. Two increasingly nervous and very tired sides. Grimsby perhaps shaded things and went the closest to winning it. Rovers boss Darrell Clarke - who was in tears as the Gas were relegated after losing at home to Mansfield last season ... and who controversially celebrated beating Forest Green Rovers in the semi-finals by enjoying a few pints and starting a few chants in the notorious Queen Vic on Gloucester Road - changed his mind re. substitutions at least once, as Lines and others struggled with cramp, before bringing on ex-Grimsby keeper Steve Mildenhall Mildenkrul for Puddy, just seconds before the end. Grimsby must've won the toss as the kicks were to be taken in front of their boisterous supporters. Aside from a few thunderous renditions of 'Goodnight Irene' - and the raucous celebration of Harrison's equaliser - the 30K or so from Bristol had been rather subdued. Understandably so, given the almost unbearable tension. Grimsby, on the other hand, were loud from the off ... or at least from John-Lewis' early goal. They were, admittedly, less spread out - and, regrettably, aided by a drum - but very impressive nonetheless; particularly their 'FISH' chant. They must've felt absolutely gutted when - after a string of excellent kicks - former Wanky Wanderers striker Jon-Paul Pittman did his best Chris Waddle impression. I didn't celebrate too wildly as there was, at least, one more Rovers penalty to come but the otherwise ineffectual Angelo Balanta was coolness personified and then this happened ...


^^^ Euphoria. Then relief. Then genuine sympathy for Grimsby. Their third successive play-off failure. I had long since envisaged Rovers losing to Eastleigh in the final and so approached the Grimsby match-up knowing that, if the Gas were to get beat, at least it would be by a 'proper' football club and not a here-today-gone-tomorrow-sugar-Daddy-plaything. Like others, one suspects, I associate certain football clubs with certain persons I've met/ know (e.g. Ally T and my old Politics teacher - Mr McDonald - with AFC Bournemouth; the boss of my wife's boss and Timmy Mallet with Oxford United). Until recently, Grimsby had the misfortune to be associated, only by me, with the room mate of a good friend of mine during our first year at Uni. He - the room mate - was a Grimsby fan and a bit of an oddball ... who was later found to have indecent images of children stored on his computer. Now, thankfully, I can instead associate the Mariners with the hospitable folk who signed Macleod (M), Will H and I into Cleethorpes' New Imperial Social Club in January 2014; with the commendable vocal support at Wembley last month. Like many other Rovers fans, I sincerely hope that they win automatic promotion next season and can start adding to their 99 years as a Football League club. FISH! (Top badge as well, BTW.) 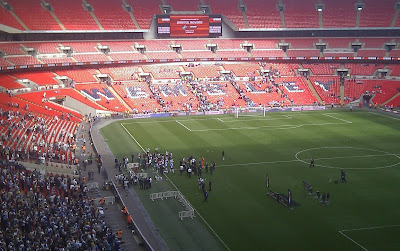 ^^^ We stayed just long enough to see Clarke and the boys lift the trophy aloft (should play-off winners really get awarded a trophy?) before heading back to the Green Man. I felt utterly drained. 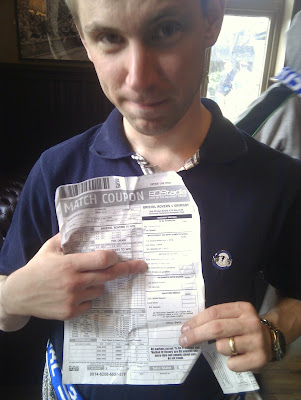 ^^^ More Doom Bar, as Arsenal fluked an equaliser at Old Trafford. Willie T and I also cheered by the fact that we'd lumped on 'Bristol Rovers to win on penalties' @ 10/1. Ker-CHING! 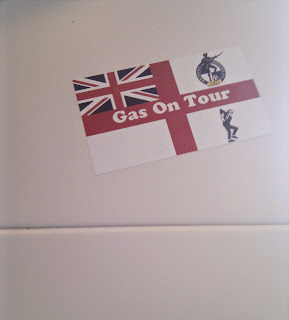 ^^^ Yep. And in League Two next season! Where they'll play against the hated Wanky Wanderers, after the Chairboys hilariously conceded a 122nd min equaliser and then lost a penalty shootout against Southend United in their play-off final (in front of a 38,232 crowd; not many more than Rovers took themselves!). One suspects that the game at Adams Park will be rather tasty. Looking forward to it. UTG.
Posted by Lenny Baryea at 20:00 No comments: