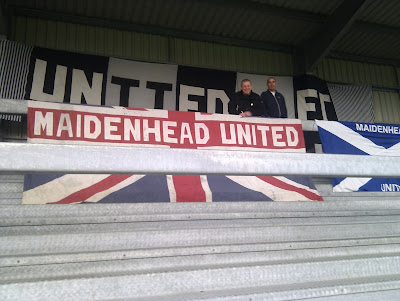 Twas an early start for Macleod (M), Scouse Mick and I, but at least we would be in Weston-super-Mare in good time to watch the early games on TV (Leeds @ Burnley and Arsenal @ Norwich). I reckon that those on the 11:30 from Bristol Temple Meads to Aberdeen are probably still travelling, though! 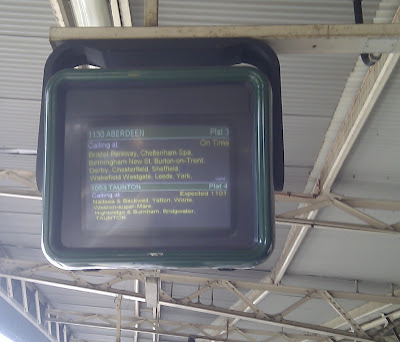 The MUFC Ltd forum has been half decent, of late, if only because there has been some debate as to the future direction of the club. It's still definitely a case, though, of 'silence speaks louder than words'; certain contributors only post to list the winning 49 Club numbers, or to bite after tongue-in-cheek comments re their Reading FC supporting, cricket-loving cyber friends (nothing against cricket-lovers, generally, BTW): 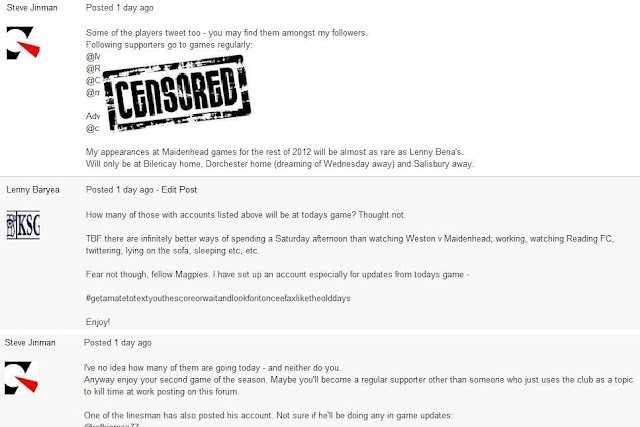 The self-styled Spin Doctor wasn't at yesterday's game. I think he might have been working. Everyone spot the unintentional irony? Good.

I passed some time on the train journey by responding to Stevie G (who doesn't like to mention that he's a Director of Maidenhead United, honest!), but my subsequent post (which featured nothing but an Echo & The Bunnymen lyric about 'killing time') was removed without an accompanying explanation.

Censorship on the MUFC Ltd forum is alive and well; only the other week a post I'd added to a thread about celebrity fans was removed because it contained the phrase 'ginger tosser' in the context of describing the actor Matthew Cottle, a regular (at least in the past) at York Road and most famous for playing Martin Henson (repeatedly referred to as a 'ginger tosser') in the 90s sitcom Game On.

Bearing in mind the lies that have been written about us in the past (in letters from the club signed by Mark Steward; MUSA committee meeting minutes deliberately misconstrued by Cloughie; false accusations of inappropriate chanting at Cinderford on The Educated Left Foot), it is truly pathetic that trivial comments like this that get removed. Not unlike our defeat at home to Humpton last Tuesday night - and Drax's multi-year contract extensions - it is, however, entirely predictable. 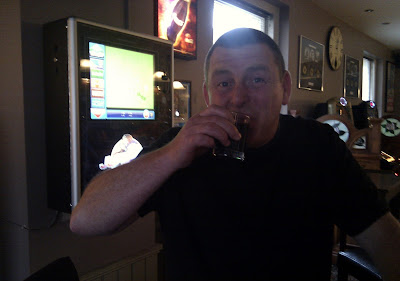 ^^^ Anyway, to The Tavern Inn the Town and Mick was on the shorts before midday! Sadly, no sign of Jonny Wah Wah (still in Manchester, following a Motörhead gig the night before) or Seanwsm (whom Murdo wanted to buy a pint and watch the Leeds game with). 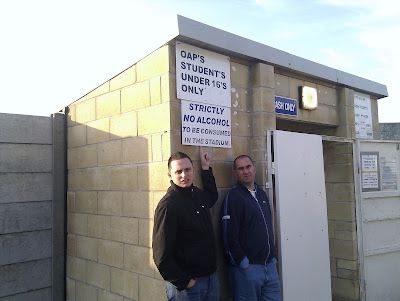 ^^^ We insisted the steward check the flag bag. He was happy. I still expect a letter, though, from MUFC Ltd. In all seriousness, the Weston stewards (especially the one who looked through the bag, at our request) were top notch ... in stark contrast, of course, to those at Ebbsfleet United. 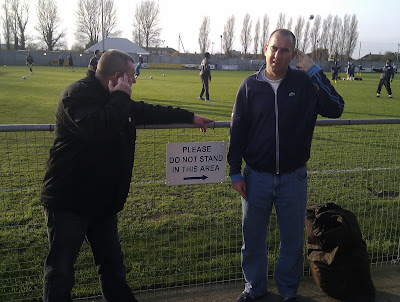 ^^^ This blatant breach of ground regulation will surely not go unpunished. Nb. one of the many MUFC Ltd coaches, in the background, doing his ting.

Shortly after this photo was taken we went into the bar and the Swansea City-supporting barman informed Macleod (M) that Leeds had won 2-1. They'd been one down when we had left the pub and caught a taxi to the ground (a quick pick-up and cheap ride, so use Arc Taxis when in Weston). We were joined, pre kick-off, by Les and then Logic before heading outside to discover that MUFC were shooting towards the decent stand in the first half :-( 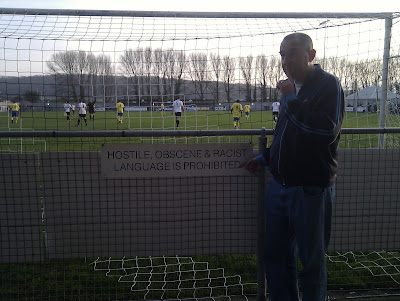 ^^^ There was plenty of what the EUFC stewards would deem 'foul and abusive language' from both sets of supporters. The MUSA secretary (who wasn't wearing a club tie and suit this weekend) sat to the side and said nothing. Obviously swearing is OK for the people he drives to the games. Just not for us (even, or especially, when we deny swearing in the first place). IMO he is a weaselly, sanctimonious Yes Man. 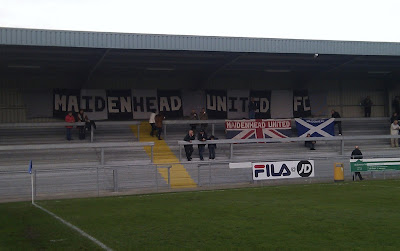 ^^^ On a previous visit to Weston, Macleod (M) and the aforementioned Seanwsm had a 'coming together'. The stewards on that occasion ordered us to "get back in your own end". As such, we assume that this half of the decent stand is the away end and so we put up the flags there at half-time despite the fact that Maidenhead were shooting the other way.

"Maidenhead, give us a song" we chanted at the rest of the travelling Magpie hordes, congregated at the other end in the second half. We could barely hear their response. Les would later claim that they couldn't hear us. Drax obviously could. He waved at us when we sang "Johnson, give us a wave". I think Drax is a good manager. 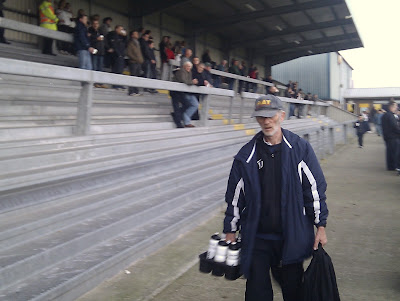 ^^^ Above is MUFC's legendary kit man Jon Urry. He used to be the physio. We greeted him, as we usually do, with a burst of "Jon Urry! Jon Urry! Rub your hands all over my body". He couldn't doff his cap to us as usual - which was a shame - as he had his hands full, carrying things. I like Jon Urry.

In the top left of this photo you can also just about see some of the track-suited Weston-super-Mare youngsters. The U12s obviously didn't have a game and so, as happened at Chertsea Town, they were nominated cheer leaders for the day. One of them had a haircut like Jimmy Saville and - after we had pointed this out in a chant - his team-mates all laughed (with him, not at him, I'm sure). We also chanted "Cloughie's gonna get ya" when they swore. Unsurprisingly, the MUSA secretary didn't say anything. As aforementioned, he's obviously only anti-swearing when it is us (allegedly) doing it. 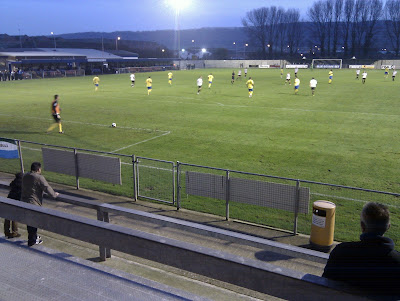 ^^^ The Magpies wore their new yellow and blue away kit. "Are we Farnborough in disguise?" and "Come on you Reds" were therefore bellowed out by those in the designated away end.

The game was rubbish. I honestly don't remember Conference South football generally - and MUFC Ltd specifically - being this bad. Maybe so and I've just forgotten. Weston took the lead with a free header at the back post. The next minute I was reading the team-sheet - as I didn't believe that the MUFC Ltd number 8, so hopelessly off-the-pace, was Bradley Quamina - and so missed the home side doubling their lead.

I was kindly keeping those who weren't at the game - because they had better things to do (lucky them) - updated of goings on via the forum (I haven't properly worked out how to use Tw@tter as yet). And when Marc McGregor came on, after SuperManny (who doesn't seem to be quite so Super these days) halved the deficit, I posted that he always scores against us (although I might have been getting him confused with Mark McKeever ... TBF, there are lots of players who make a habit of scoring against Maidenhead!). Anyway, McGregor scored, with another unopposed header from a free kick, within minutes of my post. The Maidenhead defence just stood and watched.

Marcus Rose had needlessly given the free kick away and, overall, he had a shocker of a game. Countless times he hoofed the ball aimlessly forward instead of playing a simple sideways pass to stand-in captain Bobby Behzadi, at right-back. I refuse to believe that Rose is better than the recently-released Andrew Fagan. Alex Wall - like the aforementioned Quamina - was also off-the-pace, whilst Max Worsfold's delivery from set-pieces was poor.

Indeed, IMO, the only plus points were the tireless Behzadi (who acknowledged us in the bar afterwards; he definitely is 'The Daddy') and a great strike from substitute and debutant Paul Semakula (who obviously hasn't been at the club long enough to realise that the KSG are personae non gratae) to bring the score back to 3-2. Unfortunately for Maidenhead, Ryan Northmore doesn't play in goal for Weston any more and so we weren't gifted a way back into the match. Indeed, Weston scored the goal of the game in injury time, which made the score-line a fair one.

Maidenhead had looked better when ex Seagull Ashan Holgate and the personification of a family club ("we are a family club, sponsored by lap dancers") came on - hitting the post and having a couple of goalmouth scrambles - but, despite stating in the Advertiser that he was going to play his strongest team and that all the focus was on Weston (rather than Aldershot), Drax had picked a weakened line-up and it appeared as if the players minds were elsewhere.

They weren't the only ones. "We're going to Hillsborough, we're going to Hillsborough. You're not, you're not" we chanted, with our tongues-firmly-in-cheek. At the end, the Weston PA announcer also wished us luck for Tuesday's replay at Aldershot. I don't think he was taking the piss, although he might have been. I would have put my mortgage on us losing against Humpton and Weston, but wouldn't be completely surprised if we somehow got past Aldershot (I predict an improved performance and gallant defeat). This ties in with another Drax comment in the Advertiser, however: that the players are being unprofessional in seemingly only raising their game for the likes of Woking and Aldershot. And here's me, lead to believe that we are more professional under Drax ...

Another prediction: after being knocked out of both the FA Cup and the Trophy in the next two games, the budget will be increased and we'll see an influx of new players. We will continue to struggle but finish outside of the relegation places (not that finishing in the relegation places guarantees relegation, anyway) and this will be lauded as another 'great achievement'. Drax will then be given another multi-year contract extension.

If witnessing Maidenhead's 8th defeat in ten games (two points from a possible 30) wasn't bad enough, I was to discover in the bar after the game that Bristol Rovers had lost 2-0 at home to Barnet (with Murdo's long-lost cousin, Izale, getting the Bees' first goal). The Gas are another club with an inept and out-of-touch Board. Despite Arsenal's earlier win, it was 'drown your sorrows' time (not that we need an excuse) and so, after another efficient job by Arc Taxis, we started a pub crawl at the recently-refurbished(?) Old Colonial, on the seafront. 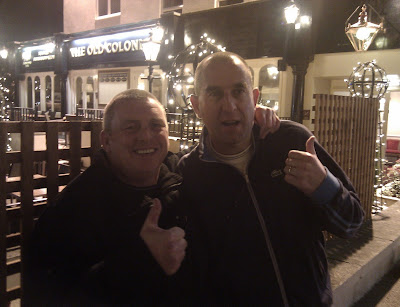 The crawl included the bars of a number of decent-looking sea-front hotels (The York being the pick of the bunch), an empty gay(?) club called Eternity, rejection at the pier entrance (Mick wanted to go on, but apparently they shut the gates to the public at half six), another visit to the Tavern Inn the Town (where I played air guitar like the great Nigel Tufnel) and then a mad dash - via Tescos and a hastily-purchased carry-out - for the last train home.

The train ride was an entertaining one: we shared our drinks with a group of buxom wives en route to Swindon for a night out and some posh lads from Wood End who had spent the day drinking in Bath for no particular reason. One of the lads resembled a bearded Elijah Wood. In turn, he pointed out that Macleod (M) looks like Russ Abbott. I laughed so hard I almost cried.

Laughter and tears; synonymous with the MUFC Ltd performance and the day in general, actually. We really need to stay over in Weston next time. Macleod (M), Mick and I all agreed that we would do (but then we've said that before). Odds on us playing there in midweek, next season (or that we get relegated)?

The way things are going at the moment ...