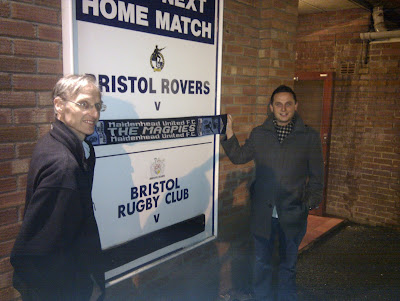 I was en route to Oxford United vs Bristol Rovers, with the wife, when I first heard that Maidenhead United Youth - or Oxford City Youth - had drawn Bristol Rovers away in the FA Youth Cup. I immediately text Macleod (M), who said he would be up for the game, if it were ever to take place. Fortunately the MUFC youngsters are in fine shape this season and saw off Oxford City (by the odd goal in nine, I think) to set up the tie. I'd already checked, via a post on the Bristol Rovers Alternative Forum, that the game would take place at the Memorial Stadium and, despite being absolutely knackered following our escapades in Leipzig, was really looking forward to it. Macleod (M) was initially going to drive but, on the day, it became apparent that Les had already agreed to take Logic and he was happy to give us a lift as well.

I met Macleod (M) in the Anchor 90 minutes before our agreed departure time. This gave us an opportunity to chat with Bobby P (who was in there after work) about various topics - including the recent CPO vote re Stamford Bridge and why Will Hendry's nickname could be Ali G - and to present Landlord Joe with the latest exhibits for the Anchor scarf museum (a light blue and white Chemnizter one and a black, blue, and yellow Carl Zeiss Jena one). Logic arrived only a minute late (remarkable!), so we were just waiting on our designated driver. Now, Les has travelled from the likes of Leicester and Erith to watch the Magpies, and so his durability cannot to be questioned, but - like Logic - his time-keeping can leave much to be desired. It was getting to the stage where we were debating not going - and instead watching the Champions League games on TV - when he finally walked through the door, nearly an hour late. Apparently an accident at junction 8/9 of the M4 was the cause of his tardy arrival. There was no way we would make the 7:30 kick off now but, with a clear run down the M4 to Bristol, we would be there in time for the second half. As it happened, Les made decent time and we entered the piecemeal rugby ground just as Rovers scored to go 2-0 up, with about 15 minutes left of the first period.

For the rest of the half, Maidenhead barely had a kick. Perhaps they were showing their higher-level opponents too much respect? Anyway, after the obligatory photos of Macleod (M) with the "down with this sort of thing!" signs - and a much-needed Cornish Pasty - the Ref blew for the interval. Only one side of the ground was open - the cricket pavilion- like DAS Stand, and the Family Terrace, housed the 300-odd crowd (which is more than watched Boreham Wood vs Maidenhead United in the Blue Sq Bet South last Monday!) - meaning that the Blackthorn End was unused. The Blackthorn End is the Rovers Kop - the Rovers Bell End - and is where I always like to stand when watching the Gas at home. As such, this was obviously where I wanted to hang the flags. I asked a steward ... who directed me to another steward ... who directed me to another steward ... when - finally, and to my surprise - we got the green light. I don't think they were expecting three flags ... and they were certainly surprised by the size of one of them! 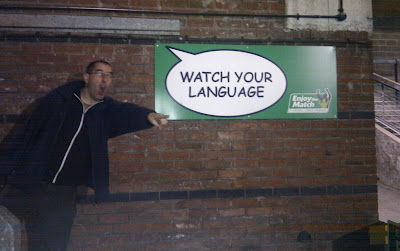 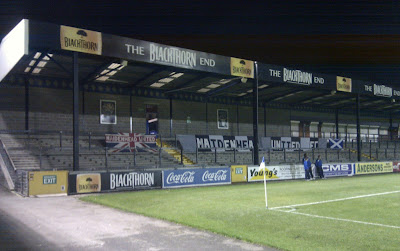 Dom and Sam Lock's half-time team-talk - and the flags (obviously!) - inspired those in black and white, and Maidenhead were infinitely more competitive after the break. A long-range strike from Brandon Baker-Timms halved the deficit and, for a ten minute or so period, Rovers were on the back foot as United strove for an equaliser. Indeed, the third Rovers goal - when it came (from a long hoof by the home keeper, that was allowed to bounce) - was against the run of play. Rovers would bag another towards the end, so 4-1 was the slightly unflattering final score (4-2 might have been a fairer reflection, IMO).

On a personal level, it was a truly memorable night: seeing the MUFC flags hanging in the Blackthorn End and the black and white shirts of Maidenhead playing at a league ground (and not just any league ground!). It re-emphasised my thought that seeing United play at a league ground in the FA Cup is the real Holy Grail, not Aldershot Town (for the 19th time overall) at York Road (with the away fans - by shameful necessity - being allocated the Bell End).

Anyway, aside from MUFC flags hanging in the Blackthorn End, it had also been an enjoyable evening due to the fact it was an open and entertaining game played on the deck by two talented and confident teams. The Rovers side contained young professionals such as Darren Jefferies and Lamar Powell (both of whom have featured in the first team squad this season) and other highly-rated prospects such as Tom Lockyer, Alefe Santos, Ellis Harrison, Sam Kamara and Shaquille Hunter (the latter only 16-years-old, on the bench for the first team last weekend, and thought to be a better prospect than youngest-ever Rovers player: Scott Sinclair). Hunter clearly had some tricks but was well-shackled throughout by both Maidenhead full-backs, particularly the left-sided one.

Devante McKain - the most talented 17-year-old Drax has worked with, according to recent comments in the Advertiser - resembled a young Dominic Sterling at the back, while Magpies captain Dale Wright (who's father, Nigel, would chat to us at the end) showed deft touches upfront, where he played alongside Jonathon Hippolyte (who had run the line at Cheltenham Saracens Reserves vs Maidenhead United Reserves last November, and was watched on this occasion by his father).

Both clubs can be proud, then, of young players who clearly have some real potential and who play the game the right way. And don't just take my word for it, below are some comments from various Rovers internet sources:


Went to the Mem tonight and was rewarded with the best game of football I have seen this season.

Talk about good football, it was pass and move all the way through and was totally enjoyable. Every player was comfortable on the ball and look like they have great futures ahead of them.

The down side? Just about every premier league team had a scout there.


I watched the match with about 300 others. It was a delight to see two teams using the full pitch both playing with attacking wingers...Maidenhead were no push overs and enjoyed a spirited second half scoring a superb long range goal. ~ Harry Buckle

I went last night with a few of the family, we don't normally go to games like that but have to say we really enjoyed it. As you say, talent and future prospects throughout the squad. ~ the bags

It was a thoroughly entertaining game with everybody giving it a go...the game was played in a good spirit...the scouts have plenty to tell their employers and this is the best set of kids I've seen since the Eastville days of Mabbutt, Kite, Palmer etc, mind you they'd also be impressed with the Maidenhead no 3, that boy can tackle!! ~ Biggsy

Number 11 for maidenhead was good too. ~ brfc94


"To their credit, Maidenhead still looked to break out when possible"

Praise, then, for the Maidenhead No 3 and - assuming he was the left-back - it is certainly warranted. Bearing in mind that both Bobby Behzadi and Max Worsfold have been played out of position there on occasions this season, perhaps he might be fast-tracked into first team action?

That's the thing, though; there's talk on one Rovers forum of Jordan Goddard (who was the best player on the pitch on Tuesday night, IMO) not being offered a professional contract (and so likely to be released, sometime in the future) while Shaquille Hunter apparently interests Premiership clubs (and so is a contender to follow Scott Sinclair to somewhere like Swansea, via a big money move to Chelsea and multiple loan spells at Championship clubs). The Maidenhead youngster playing left-back, meanwhile, is more likely to see first team action at Marlow United going forward, IMO, regardless of whether he has the ability to succeed.