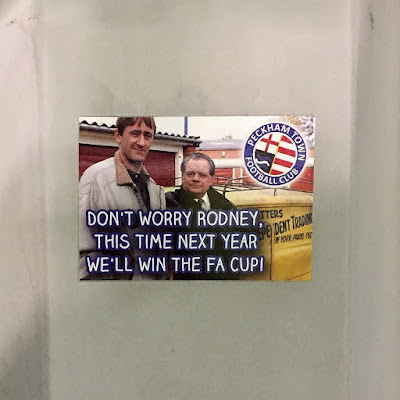 Even though I had to retrieve them from the laundry basket - after the wife reminded me, in the morning, that they hadn't been washed - my hitherto lucky underpants were on! #needsmust

A familiar haunt: my previous visits to the Silverlake Stadium have included a Macleod (M)- fronted Ye Gods! performing at the Solent Cougars Scooter Rally in July 2007, the most boring football match that I've ever attended (our 0-0 draw there in February 2009), and a 2015/16 pre-season friendly vs Abdul Osman's Partick Thistle

September from hell had seen the Magpies plummet down to earth, and down the league table, after a hugely encouraging first month of the season; October hadn't started particularly well, either

Two minutes is all Halifax had needed to take the lead on Saturday, whereas Eastleigh had to wait until the 26th; the referee, who didn't hesitate to book those wearing black and white, yet was happy to give final warning after final warning to those in blue - and who will presumably be appearing as Dopey, or one of the other dwarfs, in panto this Christmas - waved away vehement protestations of offside, from Alan Massey et al, after Danny Hollands had stooped to head in at the far post

Level at the break, though, after another Danny - birthday boy Whitehall - was quickest to react, in the opposition box, to a fortunate ricochet; there were other Maidenhead shots at goal as well - on target and everything! - and our overall performance, in the first half (at least), was a welcome improvement on recent displays

Excellent cross from the impressive Sam Smart - the Magpies had switched off at a throw-in, after a customary bout of James Comley Comedy 'winduppery' - begged to be converted … and Tyrone Barnett did the honours with a thumping header

I'd have taken a draw before kick-off and there's a good chance that we'd have secured an arguably deserved share of the spoils if our no. 18 hadn't fallen over his own feet, when a bit of Comley magic presented him with a glorious one-on-one opportunity; the former Chester man stayed down afterwards, for treatment on what the 52 away fans collectively diagnosed as acute embarrassment (the fact that it prompted a mid-match tweet from Macleod [M] is testament to what a bad miss it was; don't believe the BBC match report's truly hilarious assertion that 'Max Stryjek pulled off a superb save from James Akintunde to keep the Spitfires' lead in tact')

Goal difference is now all that separates us in 16th from Aldershot in 17th - which encapsulates our recent fall from relative grace - and Saturday's game at bottom-of-the-table Ebbsfleet has taken on a greater importance, with three points imperative; alas, it's difficult to see where our next win is coming from unless or until we bring in two or three better players to relieve the underperformers

Home to Wealdstone in the FA Cup, meanwhile, doesn't bear thinking about when you consider the recent form of the respective sides; I've nightmarish visions that we'll be comprehensively beaten, as we were by the same opposition in Drax's last home league game as Maidenhead United manager #hopenot

The cherry on the icing of the cake. A33 shut, no advance notice and detour signs seemed to disappear. Of course no actual work going on.