Torquay, or not Torquay 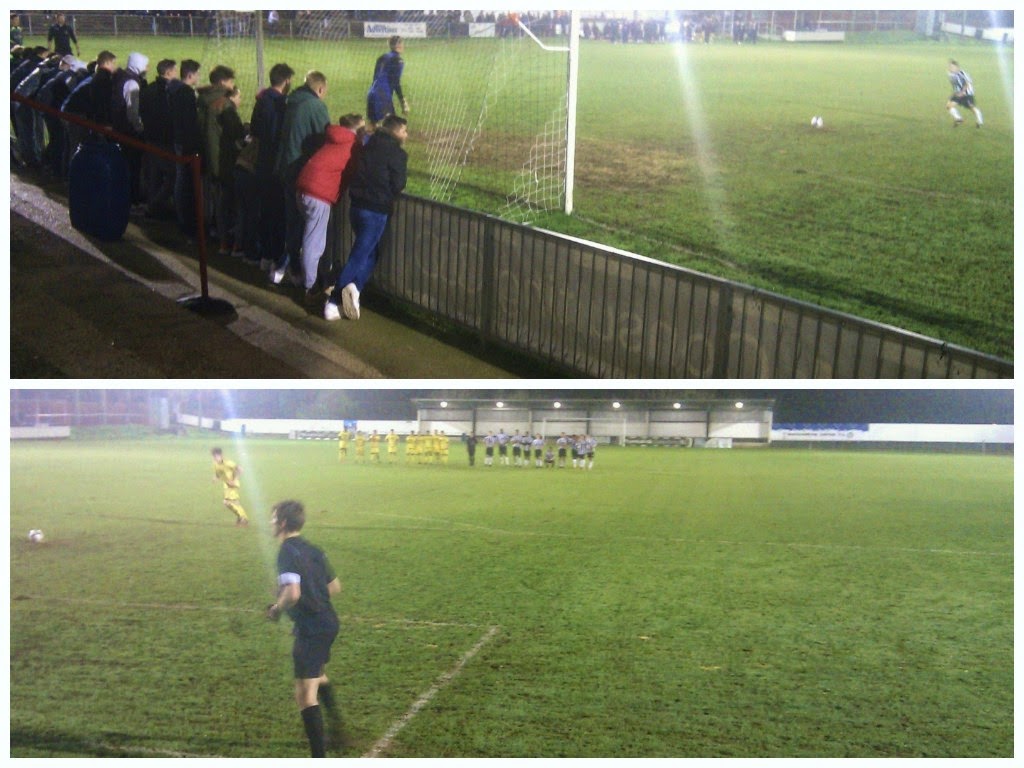 Not Torquay to be, unfortunately. :-(

In the build-up to this much anticipated tie it was noted that Maidenhead United had only reached the 2nd Round Proper of the FA Youth Cup on two previous occasions: losing heavily at Chelsea in 1989 and at Luton Town in 1999. It transpires, therefore, that our defeat at Bristol Rovers in 2011 was a round earlier than I remembered. Regardless, a congested Grove Road car park on Wednesday night was testament to the general excitement; the Magpies hosting a higher league side, with a trip to West Bromwich Albion a mouth-watering reward for the victor. I was late to arrive and the score was already 1-1. Maidenhead’s equaliser - a 30 yard volley from the highly-rated David Rogalski - was, apparently, a thing of rare beauty; one supporter describing the goal on twitter as the ‘best I’ve seen at York Road all season’.

I spent the rest of the half, alongside Steve H, on the Shelf. The great and good - Johnson Hippolyte, Dereck Brown, CWKHF, Mark Steward, Educated Left Foot, Bobby P - were watching further down the touchline. First team players Harry Pritchard and Jonathan Hippolyte were also in attendance. Lionel Strides, meanwhile, had been working the York Road turnstile upon my belated arrival. We would all witness a high tempo and exuberant first half display from the Magpies. Bayley Brown (any relation to Dereck/ Danny?) was head and shoulders above everyone else in midfield - literally - while our wide men were causing Torquay problems. It was little or no surprise when Rogalski put us deservedly ahead with a(nother) well-taken finish. The away side had barely made it outta their half since my arrival when, minutes before the break, they were awarded a free kick on the edge of the box. The dead ball was curled, superbly, onto the bar and their imposing captain - O’Neil Odofin - smartly headed home the rebound. Maidenhead had dominated certain stats - possession, territory, shots - but the most important would be all-square at the half. That said, Torquay could - remarkably - have lead at the interval; a prolonged goalmouth scramble, just before the whistle, featured a goal line clearance and also a decent save from the home keeper (Sam ‘son of Peter’ Gray).

Steve H and I moved to the Puna Stand for the second period. Still looking good, IMO, although others would comment that it has clearly been built ‘on the cheap’. No sponsorship plaques on the floor - as Macleod (M) had noticed, on his most recent visit - but not all of them were properly secured to their seats (whilst I’d also like to note, at this point, that - contrary to what is stated on the Mothership - it wasn’t just Macleod (M) who contributed to the seat ‘in remembrance of Trevor Kingham’). Anyway, this half was more evenly balanced than the first. It was also increasingly niggly, not helped by another next-to-useless referee (Neil Davies). Maidenhead again showed the greater creativity and attacking intent - hitting the bar twice - but tired noticeably as the game wore on. They were also not helped by a nasty looking injury to number 7 - Olly McCoy - who was stretchered off after a crunching tackle. It was the other side of the pitch to where we were sat, so I’ll defer to the opinions of those who were much closer, but it looked like a strong and full-blooded challenge - rather than an ‘appalling’ one – to me. McCoy was in obvious pain and that was distressing to see. The referee was poor, as already indicated, so I think he should take his fair share of responsibility for the way the match disintegrated, somewhat, into needle. Maidenhead, it should perhaps be noted, were no shrinking violets; indeed several of their players were jawing - needlessly - with the opposition and the officials, throughout the game, whilst on numerous occasions they threw or kicked dead balls away (taking lessons from Ashley Nicholls?). No one - apart from Roy Keane - wants to see a player get hurt, though, and I sincerely hope that McCoy’s injury is not as serious as it looked (and if it is, then I hope that he recovers fully and swiftly).

Both teams, perhaps understandably, struggled with cramp (and nerves?) during extra time. Maidenhead dropped a little too deep, I thought, and - as Torquay (finally) began to exert pressure - required a couple of last ditch tackles to maintain the deadlock. The away side also hit the post with a hopeful shot from distance. No goals, though, during the additional half hour. Penalties. Down the Bell End. I was instantly reminded of another midweek, under-the-lights shoot-out at York Road: an eccentric performance from legendary former AFC Bournemouth custodian John Smeulders unable to prevent the Magpies losing on penalties to Basingstoke Town, after another 2-2 draw, in the 1991/92 Full Members’ Cup (the atmosphere, during that shoot-out, was electric and hugely entertaining; a formative experience for yours truly). Unfortunately, the result was no different this time around: Maidenhead missing two penalties, Torquay just the one. The away side celebrated as if they had won the cup; the scorer of the winning spot kick, plus their captain, running around the pitch with hands cupped to ears. More than a little classless, but hey ho. One suspects that the Gulls’ OTT reaction was borne out of a sense of relief, mainly, and so essentially a back-handed compliment. And, as aforementioned, Maidenhead had been rather chippy - both on and off the pitch - so little wonder that the Torquay youngsters felt obliged to give it the big ‘un (their coach, in their local rag, has since described the atmosphere as being ‘pretty hostile’). Credit, here, to the ‘Bell End Youth’; nine or ten in number, they were noisy throughout. It was VERY cold but a couple of them were bare chested, at one point, whilst belting out a ‘Shirts off, if you love Maidenhead’ chant! They also sang the Harry Pritchard ditty, ‘Come on, you black and whites’, ‘Shall we sing a song for you?’, ‘Wem-ber-ley, Wem-ber-ley, we’re the famous Maidenhead … ’ plus others. Some of the repertoire needs refinement, some needs dropping altogether (‘Oh Maidenhead, is wonderful … ’), but their enthusiasm was impressive; certainly Macleod (M) - absent, at a Jesus & Mary Chain gig - would be justifiably proud.

Likewise, I’m sure that Sam Lock and his coaching staff will be very proud of their team’s performance. The Gulls can count themselves rather fortunate to have progressed; an alien visitor would have struggled to identity which was the higher-level side (at least until the one containing part-time players rather ran outta puff). There really wasn’t much between the teams - so headlines claiming Torquay had been ‘outclassed’ are, IMO, wide of the mark - but the Magpies certainly dominated the first half and their overall play was easier on the eye, compared to that of their more functional opponents. Indeed, I think the standout performers all wore black and white (standout, though, for reasons both good and bad). It is perhaps unfair to single out individuals for praise, but Rogalski’s performance was certainly notable: decent first touch and hold-up play, two excellent finishes, quicker and stronger than he looks. A real shame, then, that he missed his penalty in the shoot-out.

Will we ever see any of these players in the Magpies first team, though? Rogalski has, encouragingly, signed first team forms - and, as aforementioned, Drax was in attendance - but I was particularly impressed by Maidenhead’s tough tackling left back: Isaac Olorunfemi. In the aforementioned game at Bristol Rovers, coincidentally, the standout player (certainly from the Rovers fans’ perspective) was also ‘Maidenhead’s tough tackling left back’: Zac Martin, on that occasion. Where is Martin now? Holmer Green? He might still be (dual registered?) at York Road, for all I know; he might have been affected by injury, changing circumstance, a lack of ability and/ or application. Who knows? What I do know is that, whilst Martin was excelling at the Mem, the first team had the likes of Bobby ‘The Daddy’ Behzadi and Max Worsfold, playing out of position, at left back (Harry Pritchard has, on occasions, also played there this season). Indeed, Maidenhead United - despite a Youth setup of enviable quality, esp. recently - have, for more than a decade now, seen very few (if any?) home grown players establish themselves in the first team. (Brandon Baker-Timms, Ryan Debattista and Jason Belgrave were the standout performers in the last Youth team game that I attended; where are they now?)

My hope is this: fast forward a few years - to a midweek, first team league game at York Road - and several of the Maidenhead youngsters from Wednesday night, both on the field and on the Bell End, will again be actively involved in proceedings. Sadly, though, past experience would suggest that we shouldn’t hold our collective breath.

Hey ho. Let us end on a positive note: in excess of 225 were in attendance, more than the 171 that had witnessed the aforementioned Full Members’ Cup tie in January 1992. Well done all. Result aside, I enjoyed it.