People who have been openly critical of the MUFC Ltd Board certainly shouldn't 'throw' bins! 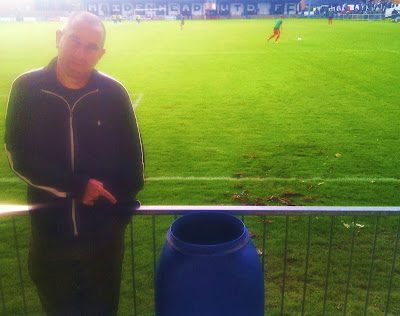 Last Saturday was a thoroughly depressing day, both on and off the pitch, at York Road.

At least it was for the Berkshire Magpies ... those from Dorset, conversely, seemed to thoroughly enjoy themselves!

Understandably, they are rather eager to view the match highlights.

TBH, I am not sure if/ when these will be uploaded to the Mothership.


Some of the language was disgusting as well ... one bloke got right in my face, as I was leaving; so much so that I could feel the spittle spewed as he launched into a foul-mouthed rant whilst jabbing me in the arm and chest with his finger.

"I'll fucking swear when I fucking want!" foamed the Maidenhead United FC Ltd Chairman, as I asked him to stop effin and jeffin, after confirming that I would pick up the bin I had man-handled in order to prevent the lifetime ban that he had subsequently threatened (bearing in mind Maidenhead's wretched form, a lifetime season ticket might prove to be a more effective penalty!)

"Watch me get into trouble for this,"

I had remarked, when lifting the (empty) bin over the advertising hoardings (but - deliberately - not onto the actual playing area), following Hippolyte Jnr's late tap-in.

"whilst others get away, scot-free, with various misdemeanors".

* BTW – describing the sweary, irrelevant chants of the Leodensians as 'fantastic support at the Bell End' is trolling, pure and simple.

What happened to those 'brainless morons'?

None were ejected, while the clearly-identifiable Merthyr fan was even allowed in for a game just a few weeks after lumping Willie T full in the face!

"We're only volunteers, what can we do?" is the tried and tested excuse. Only 'more professional' when it suits, eh?

Perhaps the issue of drinking on the terraces needs to be looked at, then, likewise the £2 a pint pre-match drink promotions?

And maybe a proportion of the budget should be spent on proper stewarding? (like at Ebbsfleet ... Arf!)

Otherwise - and this is a more serious point - someone may well get hurt.

Then all the 'family club' guff really will look stupid ... or, if you would prefer, 'brainless' and 'moronic'.

"Take responsibility for your actions," demanded a rather animated Educated Left Foot (as chippy as the Chairman ... drinking on the terraces, per chance?)

I will hereby prohibit myself from games at York Road until at least the end of this season (the current match-day experience is a far-from-enjoyable one, anyway, plus I now won't have to continually justify my non-attendance to the MMS).

Speaking of Educated Left Foot and the MMS, though, what about the member of their group who (voluntarily) went over the hoardings (after Maidenhead's goal, and before the bin did)?

Will they be on the receiving end of a spittle-spewing, finger-jabbing, expletive-laden tirade from the Chairman?

Or - and this is the point that I am at pains to make - is it one set of rules for some and a completely different set for others?

PS. Is there anyone left who doesn't share my view – first expressed several years ago – that multi-year contract extensions for the manager are an unnecessary extravagance?

PPS. I love Dorchester's Partick Thistle-esque away kit!
Posted by Lenny Baryea at 19:20