After a quarter of a game in August, none in September, three in October (including two during one weekend in Hamburg), one in November, one in December (again, in Germany), one in January (two if you count North Leigh B vs Freeland A) and one in February - i.e. just seven games (more or less) in seven months - the fixture list conspired to present us with three games in four weeks during the month of March; my 'spare' Saturday to be spent in various pubs in Clapham, celebrating a mate's birthday.

This liver and wallet-zapping extravaganza was quickly (and rather aptly, as it turns out) termed 'Mad March'.

Check out the numerous photos (too many to post on here) on the GMOSC Facebook page (and the one of Murdo and I on the GLC Tour Blog!)

As it is, brief summaries of each day below:

Where ~ Dartford (for Dartford 3-0 Maidenhead United) 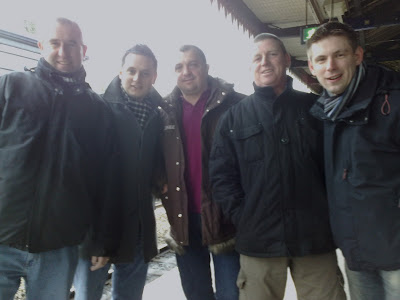 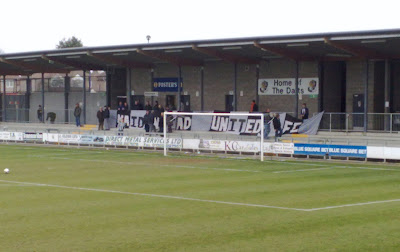 Why ~ the chance to round-up a few 'blasts from the past' (Willie, Mick, Jonny Wah Wah) and have a good ol' MUFC sing-song at a new ground (which was very impressive BTW). Cue fake goal celebrations, a conga when 3-0 down and all swear words replaced by the word 'ginge' (after Stevie G accused us, on his blog, of chanting 'ginger cnut' at Cinderford, which is a load ginging bullginge). 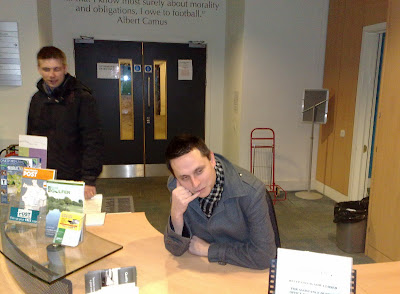 ^^^ Memorable line 1 ~ "Dartford FC, how can I help?" - customer service skills put to good use 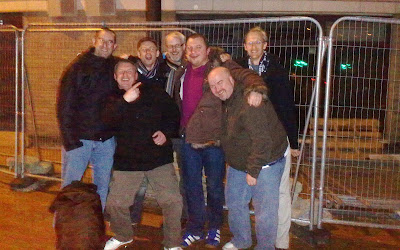 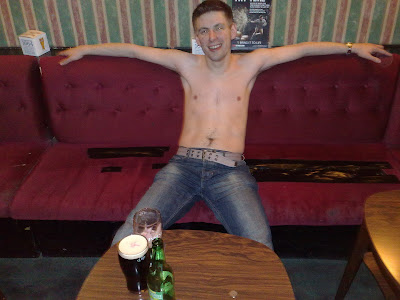 ^^^ Memorable Line 3 ~ "We should do this more often" - back in the Anchor, a shirtless Willie had clearly enjoyed the day!

What they (Dartford) had to say about our support:

Must mention the Maidenhead Massive, they sang through most of the match, and were still singing after most of us had gone home or left the pitch. As I walked out at their end they were doing a great rendition of " We'll score again, don't know where don't know when. But we know we'll score again some sunny day". Great support lads ~ Lol

I agree, although very few in number there supporters were good. However as was pointed out to me at the end of the game all but three of their players completely ignored them and went straight down the tunnel, very poor show from their players and management ~ Park Life

Massive credit to the 'Head massive who had clearly ".....drunk more than us, they'd drunk much more than us...."! Was impressed by their flags and HUGE banner ~ DA Mikey

Apart from the result i think their fans enjoyed their day out, about 10 of them were in the Ivy Leaf & the Malt Shovel until around 8pm!! ~ The future's White

What they (MUFC Ltd) had to say about our support:

The (only) three players/management who came over to applaud us at the end, incidentally, were Mark Nisbet, Bobby Behzadi and Ashley Nicholls. Fair play to 'em. The others - Kieran Knight, for one, couldn't wait to get off the pitch; I've never seen him run so fast - should hang their hands in shame (although I suspect that they couldn't care less). 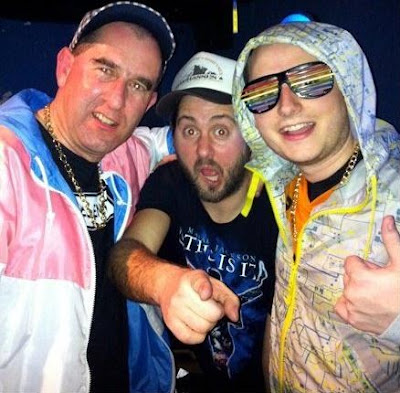 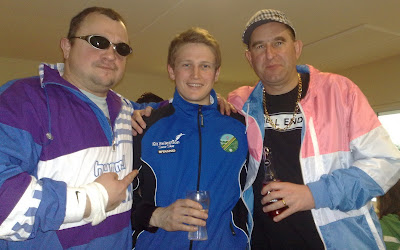 Why ~ we were supposed to see the Chain in Camden via Bromley vs MUFC Ltd the Saturday before Christmas, but both the game and the gig were postponed due to snow. The gig was re-scheduled for the same day that Ascot were at home. We'd been planning on going to the Racecourse Ground for some time, not least due to the presence of ex-Magpie Rob 'Rod Hull' Saunders (AKA Heybridge Mirror Thief) and my work colleague Sam Mac in their squad. The stars had aligned. 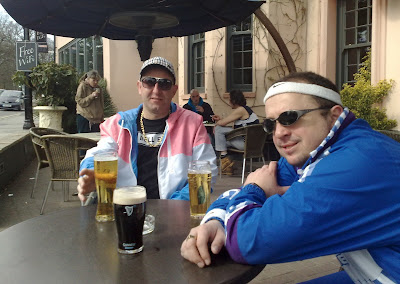 ^^^ Memorable Line 1 ~ "Got any gear" - local skagheads approach us before we've even entered the first pub! 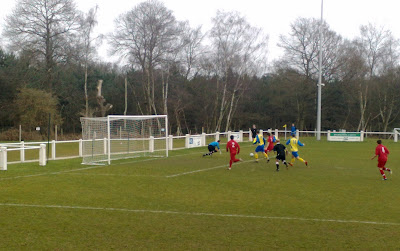 ^^^ Memorable Line 2 ~ "What the fcuk are you lot doing??" - Rob Saunders, prior to missing a penalty (below) in Ascot's 3-3 draw, spots us on the sidelines as he prepares to defend a first-half throw-in 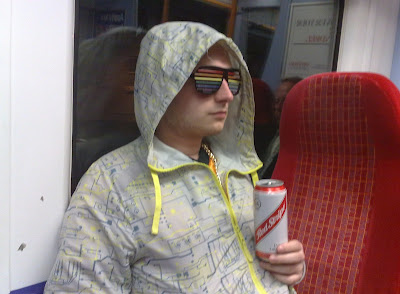 ^^^ Memorable Line 3 ~ "Football talk is now banned; 50p fine for each and every breach" - my reaction to news that Arsenal were getting beat at Old Trafford in the Cup. The train journey from Ascot to Waterloo cost me £7.50 in fines! 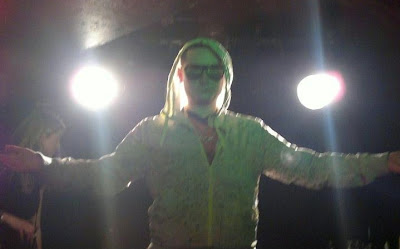 ^^^ Memorable Line 4 ~ "He's not in the band" - after the bouncers had cleared everyone, bar me, from the stage after the gig had ended in a mass stage invasion, the club DJ had to pointedly inform them that I wasn't actually a member of the GLC! 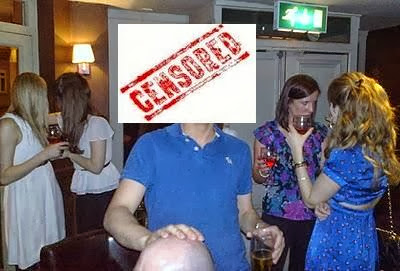 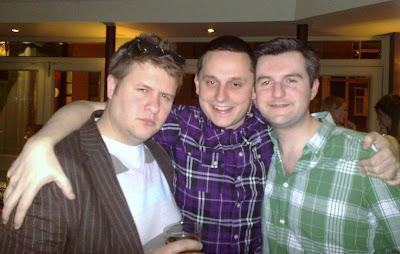 ^^^ Memorable Line 1 ~ "Woking? Not again!" - one of us journeyed between Waterloo and Woking more than once, on the train home to Walton-on-Thames

^^^ Memorable Line 2 ~ "Can you pick me up please?" - one of us ended up on Brentford High Street and had to call the wife for a lift home

^^^ Memorable Line 3 ~ "How much??" - one of us ended up in Basingstoke and got a rather expensive taxi home, rather than wait for a train to Reading

Where ~ stay-over in Berwick-upon-Tweed, taking in Berwick Rangers 1-1 East Stirlingshire (we missed the Shire goal, as we were drinking Bellhaven in the clubhouse, and then Berwick equalised at the death ... which was rather apt!) as well as several pubs (including the excellent Barrels Ale House) and then Bedrocks nightclub. 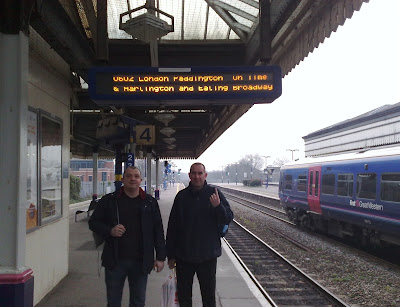 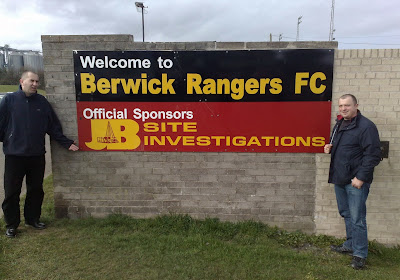 Why ~ ever since reading Jeff Connor's excellent book 'Pointless' we've said that we wanted to see the Shire play. One night in the Anchor, after an MUFC Ltd game, it was mentioned to us - by someone who would know - that Berwick was a decent night out. Berwick Rangers vs East Stirlingshire (rather than, it transpired, Whitley Bay at Poole Town in the FA Vase Semi 1st Leg, or Scotland vs Brazil at the Emirates) was penciled in as soon as the fixtures came out last summer, and was booked in early February. 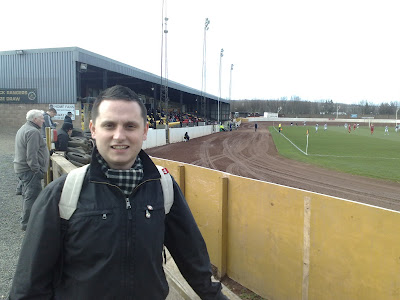 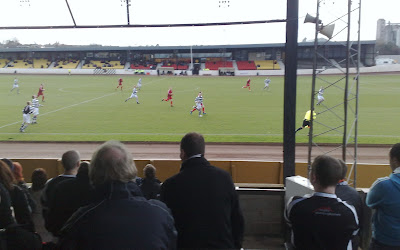 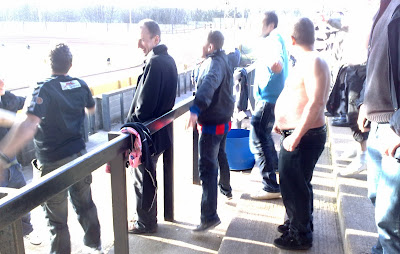 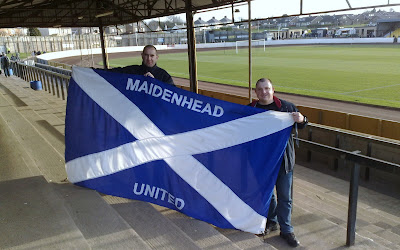 ^^^ Memorable Line 4 ~ "Nae bother; the car is fooked and I can break into the house" - paunchy, bare-chested, inebriated Shire fan's response to our offer, at the end of the match, to help search for his missing car and house keys, which he had presumably lost rolling up and down a grassy bank 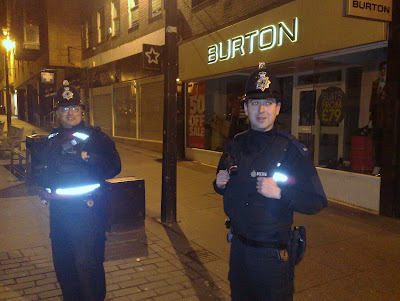 ^^^ Memorable Line 5 ~ "Community Support Officers are a complete waste of time" - young policeman to us, on Berwick Main St, after we mentioned that we rarely saw proper coppers round our way. His face went as white as a sheet when I told him that we were undercover reporters from the News of the World and were recording the conversation; prompting both him and his more experienced colleague to run away from us! 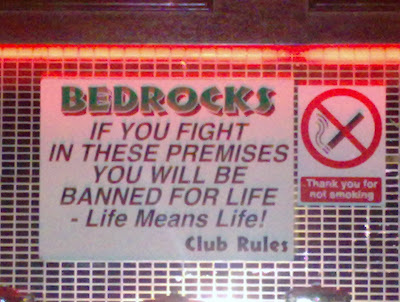 ^^^ Memorable Line 6 ~ "Who'd you kill" - question to two bouncers on the door of Berwick nightclub Bedrocks - complete with carpeted floors and £2-a-drink pricing policy - who, it transpired, were from Brighton and Harrow respectively. They both laughed ... albeit rather nervously, I thought! ;-)

Please donate if you possibly can.
Posted by Lenny Baryea at 17:00