September - the month of my birth! #virgo

Usually a busy one for me and this would be no exception: originally the plan was for a long weekend with the family, on my actual birthday (Saturday 9th), but Halifax away took precedence and, as the wife vetoed staying somewhere nearby (i.e. Hebden Bridge), our trip - to, it transpired, Rye in East Sussex - was brought forward

Transfer deadline day shock as talisman Tarpey sealed an 11th hour move to Barnet; his stats - 98 goals in 139 starts - don't even begin to cover it #legend

Text from Willie T - 'Oh oh oh oh, makes me wanna dance' - as I waited patiently for 5pm, in the sun trap that is the Ypres Castle Inn pub garden (#topten), to check the final score on twitter (he'd given away that we'd upset the league leaders by a 2-0 score line; great result full stop, let alone in our first game without the man who, according to some ignoramuses, made us a one man team)

Odametey, Harold (aka Sauce) with our game-clinching second goal; particularly pleasing as his energetic midfield displays, since signing in the summer from Humpton, have really caught the eye and - if his twitter timeline is anything to go by - he's a character to boot

No new striker required then? I dunno about that: while I'm pleased (to varying degrees) that Adrian Clifton, Jake Hyde and Sean Marks are at the club - and Sam Barratt might well continue to excel in the free role behind a target man - Dev is wise enough to know what is needed … it's more a question of whether he can get it 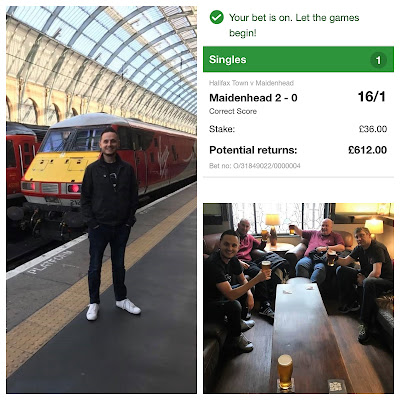 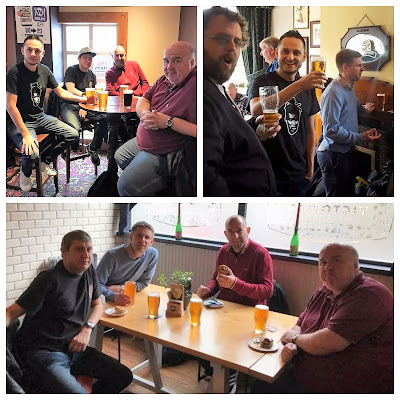 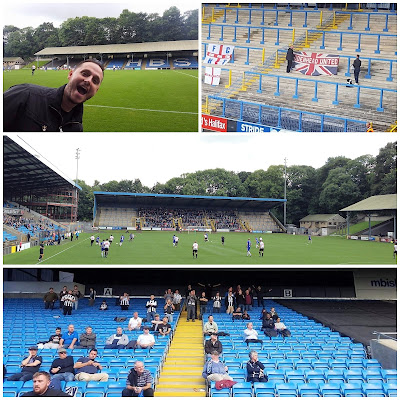 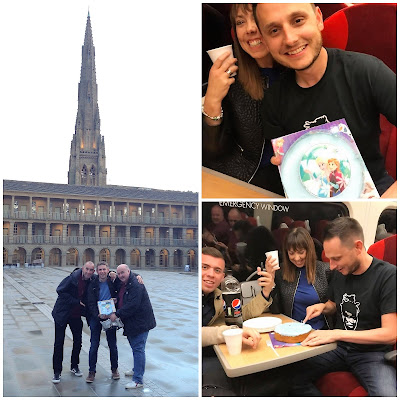 Happy Birthday to me! 9th September last fell on a Saturday in 2006; goals from Craig O'Connor (2) and Abdul Osman helped secure a 3-1 win - our first of the Southern League season - at Halesowen

An early start; I had just enough time to reset my Paddy Power password, and lump on '2-0 to Maidenhead' @ 16/1 (#makesmewannadance), before meeting Macleod (M) for the walk into town to catch - it would transpire - the 07:41 train with Craig and Willie T

List of pre-match pubs, as determined by Craig (using CAMRA's Good Beer Guide app), went as follows: the Gundog (five pints - Stuart had met us at Leeds - cost £12.50), the Barum Top Inn (this round was even cheaper: £10.95), the Victorian Craft Beer Café (£18, incl. some black pudding pork pies; Crouch End Brewery's Simcoe my 'Beer of the Day') and the Three Pigeons (excellent boozer this, ergo we went in again after the final whistle)

Intriguing game in the sense that I think you could justifiably argue a comfortable (i.e. 3-0) win for them would've been fair, or that we deserved a draw: we weren't at our best but Sean Marks missed a great chance at 0-0 and, generally, the Magpies didn't have the rub of the green against an impressive home side containing five or six standout players (goalkeeper with a first half wonder save; powerful centre halves made life very difficult for Marks; right-winger outpaced Alan Massey for the first; left-winger - with stupid haircut - bamboozled the normally rock solid Remy Clerima for the other goals; bald-headed beanpole striker won pretty much everything in the air)

Frozen (as in Disney, not extremely cold) cake - reduced to £2 - was purchased from a Tesco Express, along with the more usual carry out staples of alcohol and lard, en route to the train station (via the rather breath-taking Piece Hall)

A boisterous bunch of Scunny lads, plus the delightful Diane from Donny, helped eat the (stale) cake and also joined in with the singing of 'Happy Birthday'

Xcellent fun, basically, despite the result; a birthday that will live long in the memory 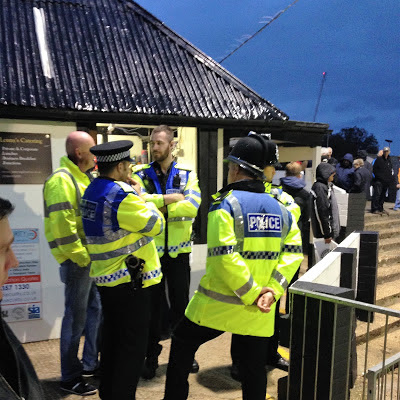 Thirty thousand plus saw Tranmere lose 1-0 at Newcastle in a Football League Div One encounter on 10th October 1992; on the same day, in Isthmian League Div One, 323 people - the second highest attendance of the season - watched Maidenhead draw 0-0 at Bishop's Stortford #contrast

Reaching the play-offs for the recently-created Premier League was something of a habit for Tranmere in the early 90s: three consecutive seasons (1992/93, 1993/94, 1994/95) they came tantalisingly close to the top flight

An inauspicious start, though, to their second non-league campaign: 14th position at the start of play was well below par for Micky Mellon's pre-season title favourites

No Marks (injured, so not even on the bench), Smith or Kilman in the starting XI for this one; replaced by Clifton, Mulley (who later hobbled off, subbed by Hyde) and Steer

MAID section of the Bell End given over to the 308 away fans - looked to be fewer in number than Wrexham - because (1.) heavy rainfall and (2.) the police were presumably OK with it after much pre-match discussion (see above photo); I look forward to us getting similar treatment at an away ground in the near future *rolls eyes*

Ex-Bristol Rovers midfielder Jeff Hughes (129 games and 28 goals for the Gas; two caps for Northern Ireland) into the book, for a foul on James Comley, just before the end of an even and largely uneventful first half

Right foot of Harry Pritchard not just for standing: he made decent connection with a drilled cross from Harold Odametey to send the Bell End - or the NHEAD UNITED section, at least - into raptures

Even if/ when we're relegated - and, as predicted before a ball was kicked, I'm confident that won't happen this season - we'll always have this: an 88th minute winner down the Bell End to clinch a well-deserved victory over a club that played in the Football League Cup Final at Wembley as recently as 2000 #magic

Barry Rake's stupendous Di Canio-esque scissor-kick volley - arguably THE best Maidenhead United goal that I've witnessed in the flesh (certainly pre-Tarpey) - is what I first think of when Boreham Wood is mentioned, despite the fact that goal was actually vs Enfield (who were ground-sharing at Meadow Park back in September 2001)

Rest game for me; a rather obvious choice for someone trying to juggle football fandom and a young family, falling as it did between Halifax/ Tranmere and Chester away

EVERY Maidenhead fan should be happy, tweeted Macleod (M) in response to news that the match wasn't segregated, i.e. Magpie supporters once more had the run of the Bell End – amen to that!

Home side domination early doors, at least according to reports I read on twitter after returning from a walk to Wessex Way shops and playground

Adrian Clifton - impressive as an attacking midfielder/ false nine during his first spell at the club; likened by Drax to Yaya Toure; Manager's Player of the Year in 2013/14 - with the (controversial) opening goal; good for him because, despite scoring in our 1-1 draw at Barrow and visibly growing into the game vs Tranmere, it's safe to say that not everyone on the terraces is convinced he's got what it takes to be Sean Marks' deputy

Mark Nisbet - peak Mark Nisbet - was compared favourably by yours truly to Dean Wells in the programme notes for the former's pre-season testimonial; Wells featured for the Wood on Saturday, lining up in defence alongside ex-Bristol Rovers and Exeter City right-back Danny Woodards (70 games/ 4 goals for the Gas)

Willie T with another 'Makes me wanna dance' text, indicating 2-0 to the Mags; Ryan Upward - back from injury - with our second

Oh no! It flashed up on Final Score that Mark Ricketts - Wells' central defensive partner - had halved the deficit in the 91st minute; thankfully, no more than a consolation

One point - one measly point - is what I'd been expecting, in all honesty, from this week's two home games; to win both was obviously an excellent response to defeat at Halifax

Didn't think we'd struggle in the National League, let alone end up being relegated, but to be fifth after 11 games (a quarter of the season, more or less) ... Wowzers! 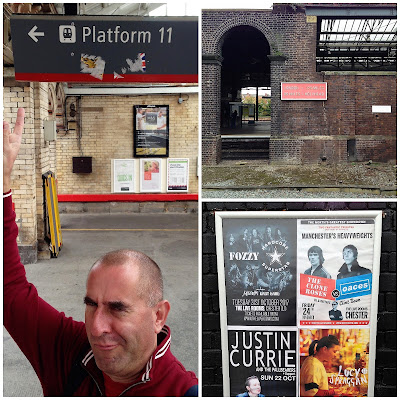 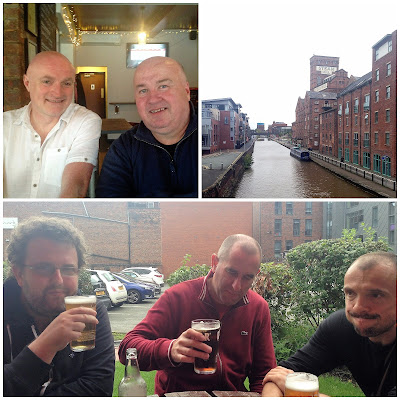 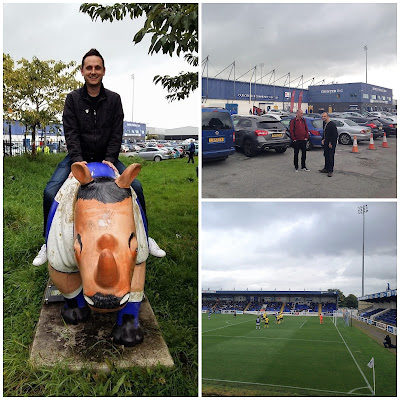 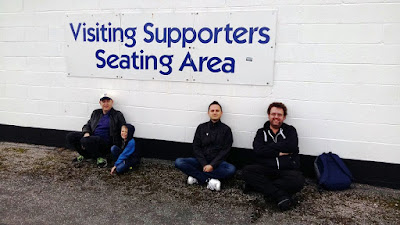 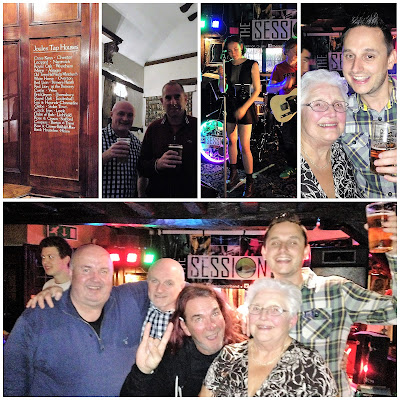 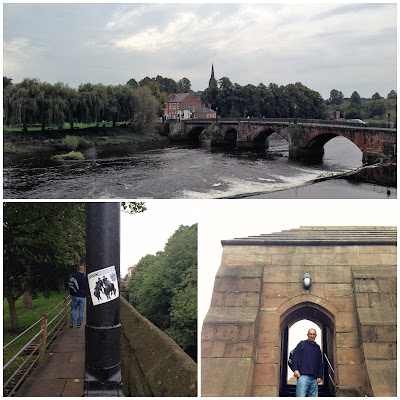 Chosen as a 'weekender' - trains and accommodation booked - within days of the fixtures being released; Macleod (C) would be flying over from Dublin for this one (three countries in one day!)

Homework done by Craig re the pre-match pub crawl: Mill Hotel (intended pub #1 - Ye Old Cottage Inn, opposite a 'private shop' on Brook Street - apparently doesn't open until 2pm on Saturdays!), the Cellar (where Graham - Craig's oldest friend - would join us after interrupting a family visit to Bury), Artichoke (we'd also been joined by Stuart and James, and the Old Harkers Arms wouldn't allow children) and, finally, the Town Crier (pub of convenience, opposite the train station taxi rank)

Emlyn - my old Maidenhead Boys teammate - had driven over from Warrington, where he now lives, for the game … although he probably wishes that he hadn't: Maidenhead conceded early and were abject throughout (our first 'defeat by more than one goal' in 54 games, against a club that hadn't won at home since December!)

Second-rate, shit, and shocking were put forward as descriptions of the performance; as bad as I can remember since Dev came back (and certainly a poor return on the £18 admission price)

The food and the officiating shouldn't escape censure: both ran the Magpies close in terms of crapness (Chester weren't all that either, with only striker James Akintunde standing out)

Evening pub crawl, after check-in to the Holiday Inn Express, featured the following stops: the Cross Keys ("We're all going on a Joule's Tap House tour". Nantwich? Check. Chester? Tick. Next stop? Wrexham.), the Brewery Tap (football talk, in this former Jacobean banqueting hall, was banned in favour of topics including 'favourite scenes from Tarantino movies' and 'possible destinations for our next Germany trip'), Ye Olde King's Head (where we chatted with an octogenarian about her love of Whitesnake, while watching a band from Altrincham - the Session - who's singer had a voice as impressive as her little black dress), and - after both Rosie's and Cruise had refused to admit me and Macleod (C), due to our footwear, and we'd had a nosey around the Night Church - the Victoria (rather cramped and reminded me - not in a good way - of some of the places we went to in Newquay)


Redemption, of sorts, for #chesterweekender courtesy of the fact that (1.) both train journeys were relatively effortless (up there, in particular, flew by as we chatted with Northern Jimbo, a Man City fan en route to the Etihad from Twickenham) and (2.) we enjoyed a pleasant walk around the City Walls - killing time before the 12:33 train home - taking in such sights as the Racecourse (the oldest in England, no less), the River Dee, Roman ruins … plus the ubiquitous Gandermonium stickers!

Getting a PASE scheme - or similar - set up was something that I used to bang on about, fairly incessantly, on the old Advertiser forum

Unadulterated joy would be an exaggeration, but it's safe to say that I was pleased when, in March 2015, the club announced a formal link with the Berkshire College of Agriculture

I actually made my BCA debut on Saturday, attending their Family Zoo Day; the raccoons, African pygmy goats, and cotton-top tamarins in particular, sparking maniacal laughter from Junior

Sorry to see that ex-Magpie Adam Lockwood had been sacked - back in August - as Lions manager; the league table would suggest that his replacement, former Barrow boss Paul Cox, has a tough job on his hands

Evidence sought that Chester was an aberration; as discussed last Sunday, during our navigation of the City Walls, Maidenhead's reaction to that lamentable performance would be all-important

Loved Dev's pre-match comments in the Advertiser; no excuses (unlike you-know-who)

Easy win (Upward, Pritchard and Comley - his first for the club - with the goals); just what the Doctor Ashley Nicholls ordered


Your father's Maidenhead United? No. Re-confirmed.