I was at Tegel airport, on the way home from a fabulous week in Berlin celebrating my father-in-law's birthday, when I discovered that Maidenhead had squeezed past Winchester in their FA Cup replay and would be playing at Blackfield & Langley in the next round. I think most of my free Deutsche Telekom WiFi minutes were spent trying to work out (a) where Blackfield & Langley is and (b) how you would get there. Macleod (M) had already suggested, on Facebook, going via the Hythe ferry and this was ultimately the chosen option; Les, in a forwarded email, cogently explaining why:

1. Upon arrival at Southampton, it's necessary to get across the Solent. As I see it the likely options for that are ferry, bus or taxi. Ferry is by far the least practical option since, unlike in the case of Gosport, it only shaves a couple of miles off the distance travelled as compared to taking a bus or taxi via the Redbridge causeway, and anyway, Hythe pier is absolutely not within walking distance of the ground. Then there's the matter of the ferry fare: at £5.80 return it would probably be quicker and cheaper to take a taxi from pier to pier than to take the ferry.

2. In spite of (1), if others are up for it I'm minded to take the ferry to Hythe almost on a point of principle. If I wanted a quick and direct journey I'd drive. The walk from Southampton Central to Town Quay passes plenty of boozers, and Hythe is a more than decent place to stop for light refreshments as well. I don't think there's much near the ground. And it would be good to get the flags out on the ferry, as we did on the way back from Gosport.

Ah, Gosport. Not my finest hour. Indeed, Craig messaged from Portugal on Saturday morning (ahead of the Gibraltar vs Scotland game) to say that, as we were taking the ferry, I should pack a spare pair of jeans. Arf. 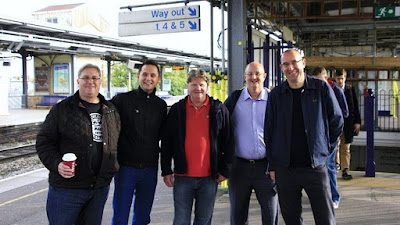 ^^^ Steve H, Woody, McKendrick and Scouse Mick joined Macleod (M) and I on the 09:53 from Maidenhead. My parents were also on the train, journeying to Winchester for a day out because they'd heard good things. 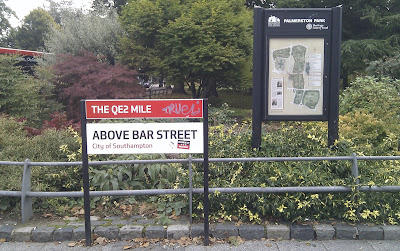 ^^^ Into Southampton Central at 11:17, as scheduled, and then a short walk to Bar Street Above Bar Street. The plan was to head straight to the local Wetherspoons - the Standing Order - but certain individuals within our group couldn't make it past the first pub: Yates's. It was rubbish - no ales on apart from a substandard Doom Bar - and so we didn't stay long. I made sure that the 'Republic of Mancunia' sticker, on the street sign pictured above, got 'Bell Ended' as we left. 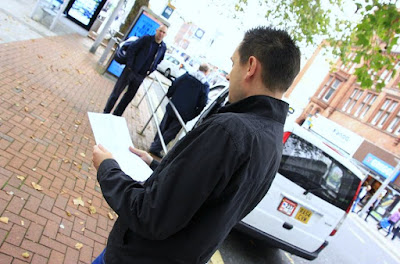 ^^^ I'd printed out directions, for the walk to the Town Quay, but certain individuals within our group couldn't make it past the first taxi. 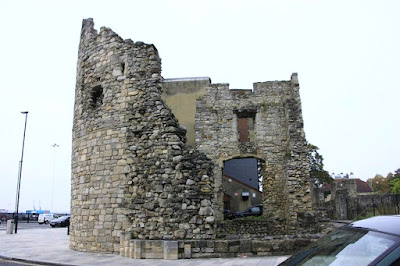 ^^^ Southampton town walls; photographed by Mick from the window of the taxi. #yeractualcultureinnit 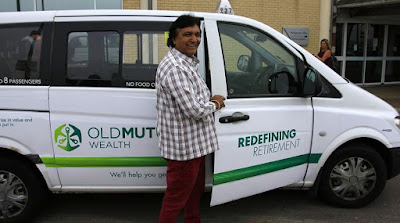 ^^^ I thought that this rather irritable fellow looked a little bit like Arjuna Ranatunga, the former Sri Lankan cricket captain. 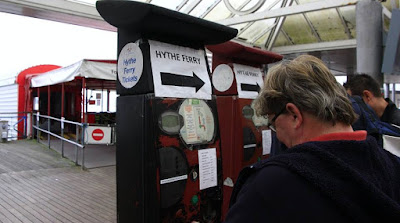 ^^^ Hythe ferry ticket machines. Exact fare (£5.80) required. You were instructed to see the ticket inspector if you needed change. Although he only had £1 coins. Obvs. 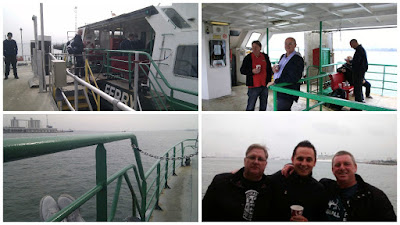 ^^^ Ferry. Great fun. Even the coffees tasted good ;-) It was around this time that we received word of severe delays on the railway; Les, for one, was stuck north of Winchester. Two differing reasons were given: a broken down train at Botley (is that not a different line?) and a fire at Eastleigh. Mick had nothing to do with the latter, honest! 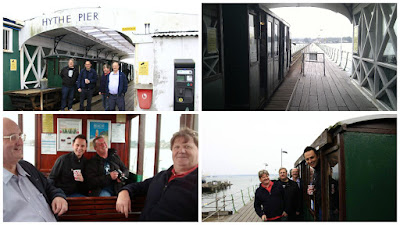 ^^^ Murder on the Orient Express Murdo on the Hythe Pier Express. 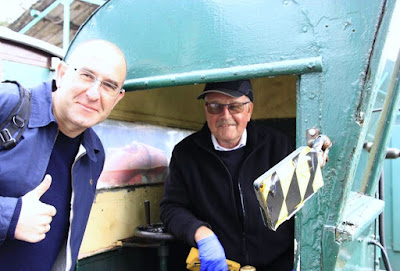 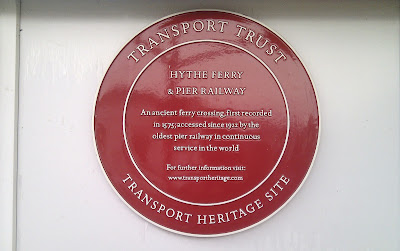 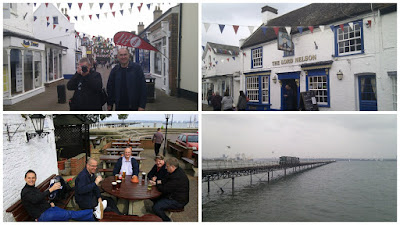 ^^^ Hythe; the Lord Nelson is No. 5 on it's picturesque High Street. Excellent pub this; we sat out the back, overlooking the railway. A little blustery, but the sun was getting through the clouds; which rather summed up the day to this point. Then one of the locals, with whom we were chatting, asked a question: "So, you've come all the way from Kent?" *facepalm* My worst fears, that the day would quickly start to disintegrate, were confounded when the tasty Ringwood Best Bitter ran dry and we were forced back on the Doom Bar. A sign of things to come ... 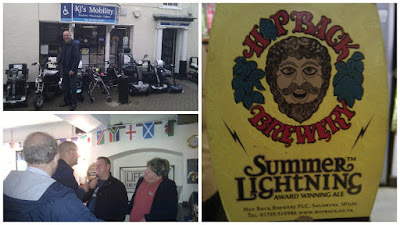 ^^^ The aforementioned local had recommended the Malt & Hops, despite it apparently being the 'roughest' pub in Hythe (#whatwouldmerthyrdo?). He said that he'd give us a shout when he left, so we could follow him there, but then went without us. After a quick photo of Macleod (M) outside a shopmobility emporium, imprecise directions from a young Goth couple, and a somewhat meandering walk, we caught up with him and his friends (#can'tgetawayfromusthateasy). Hop Back Brewery's Summer Lightning was far too fruity for my liking, but the pub was decent enough; if it really is the roughest boozer then this is testament to the fact that Hythe is a praiseworthy little town. Macleod (M) put a quid in the jukebox and I stuck on three Goldie Lookin Chain songs. We didn't get to hear them, though, as Take That played repeatedly until our taxis arrived. ("I feel like such a twat, cos I really likes Take That") 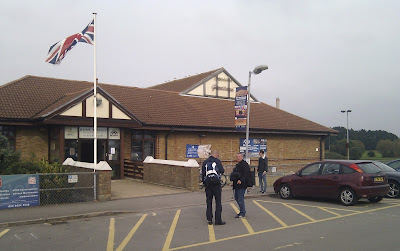 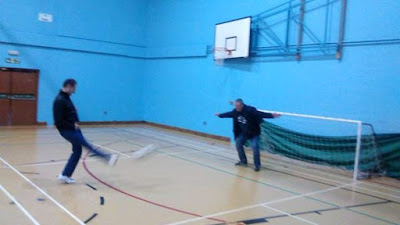 ^^^ Pre-match kickabout. Didn't score past Mick once and think I pulled something. 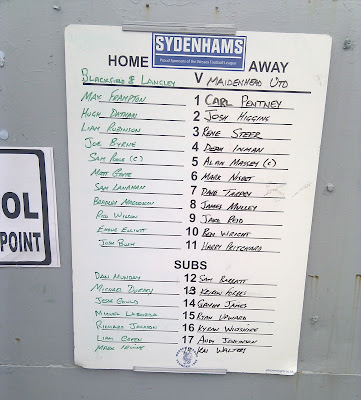 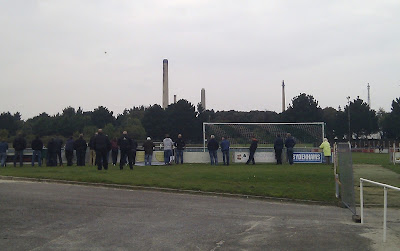 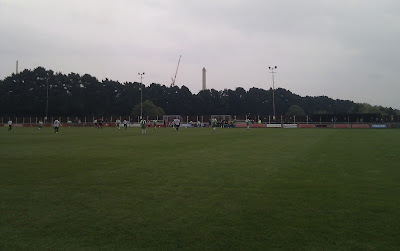 ^^^ TBF, the pitch wasn't exactly conducive to sexy football. Indeed, the game was as uneventful as the queue for food was long. Macleod (M) said that the grub, when it finally arrived, was good ... unlike the service. He thought it apt that they forgot to charge him. 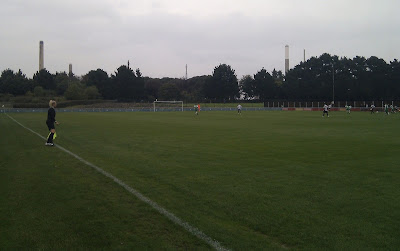 ^^^ "Mother, I can never come home again, cos I seem to have left an important part of my brain somewhere. Somewhere in a field in Hampshire". Note the female assistant; tasteless remarks, from a member of the travelling contingent, were out of order and I told him so. 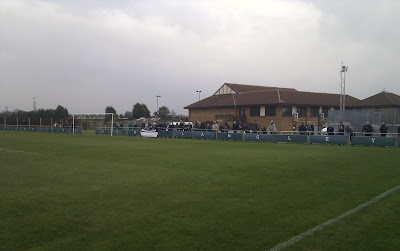 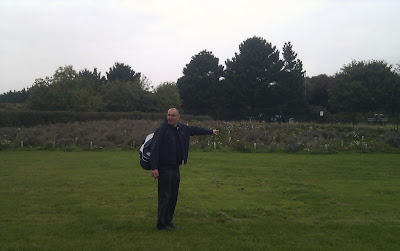 ^^^ Flowers behind the goal! Like the old Eastville Stadium. Sort of. Note the scruffy-looking, curly-haired, paunchy bloke - top, right - sat behind the wire mesh fence, alone on a bench, next to a children's playground (make of that what you will). Apparently he was giving Macleod (M) and Mick the middle-finger before they'd even started hanging the flags … 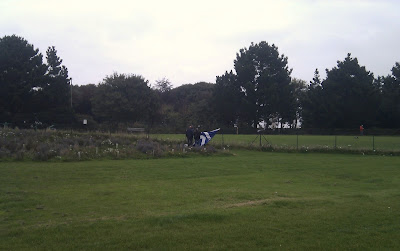 ^^^ Curly pulled down the saltire, ripping a tie from it in the process. He was unreasonable throughout the brief conversation I had with him (which ended with me suggesting that he return to his seat, next to the play area). Things continued to escalate, for reasons that remain unclear clear to me, after my attention had long since been diverted by the match restart. I shall defer to twitter … 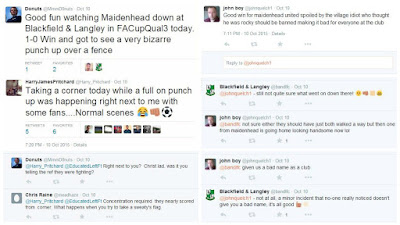 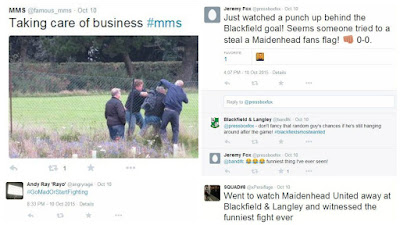 ^^^ Non League Day RUINED. TBF, when all is said and done, I think that this is probably the first time I've seen actual fisticuffs at a Maidenhead game since one of our coaches and the current MUSA secretary were both decked by some cap-wearing Stoke City hoolies on the pitch at Stafford Rangers (I missed the MMS' '60 second stramash' vs Eastleigh; have only heard rumours re two of our stewards beating up that Merthyr Tydfil fan). B&LFC's black bomber-jacketed security men - Max and Paddy - were helpful enough, after the event, but conspicuous by their absence prior to that. Where were the Ebbsfleet stewards, or Rasher, when needed?! ;-)

^^^ I missed much of the second half, incl. Maidenhead's winning goal, as I was in the clubhouse with McKendrick and Woody - who had been watching Scotland scrape past Samoa in the egg chasing - and Mick; reuniting the latter with his camera. Funnily enough, he didn't look out of place in here, bloodied and bruised, as it was packed with players from Fawley RFC. Bit naff that the bar is shared, particularly as it is on the small side. (Yes, I know, #potkettleblack coming from a Maidenhead fan!) 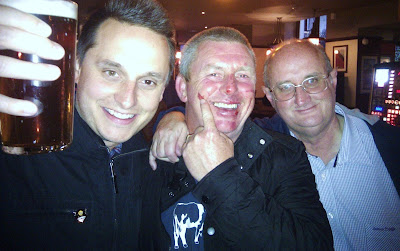 ^^^ Alan Dev and Happy Bob both said 'hello', in the bar, whilst Dean Inman and Alan Massey asked after Mick as they were boarding the team coach. We ordered a taxi straight back to Southampton and headed, belatedly, to the aforementioned Standing Order. Much better than Yates's, but we had already decided to bolt for the station - to catch an earlier-than-planned train - when Les, Logic, Rainey et al arrived. Proposed meet with Wealdstone postponed, meanwhile, as the Stones lot had apparently enjoyed themselves a little too much at nearby Brockenhurst. 'I bet blackfield and whatever they are called didn't say nice things about you lot,' wrote Sudhir on Facebook; implying, I think, that our friends from Middlesex had made a good impression. They've changed ;-) 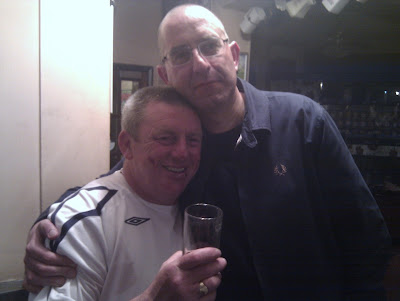 ^^^ We went to Asda for a carry out, before leaving Southampton, and so the stragglers were able to catch up; indeed, the train contained more than its fair share of returning Magpie hordes. Also travelling on it was the Mail on Sunday's 'fulminator-in-chief' and I chatted with the Orwell Prize-winning journalist, stood in a vestibule, after Les had left the train at Basingstoke; one topic of conversation was 'sibling rivalry'. The passengers on the train from Reading to Maidenhead, meanwhile, were serenaded with lusty renditions of 'Soggy Sombrero', 'You are my Bell End', 'HEA, RTS' and suchlike; see, Virgin Trains, it's not just rugby fans who love 'jovial sing-songs'. Back on home turf; to the Vine (above). It's been done-up, since my last visit, but I'm still not a massive fan; the Anchor but not the Anchor … if that makes sense? 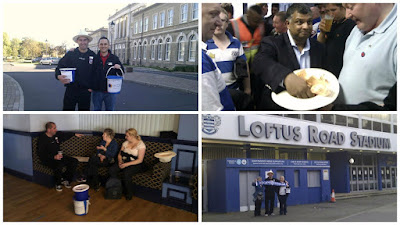 ^^^ So, United's reward in Monday's draw? As I wrote in various text messages, and on the Conference South forum, normally I'd have everything crossed for an 'exotic' away tie but, after #fencegate, someone boring at home was probably for the best. I had Basingstoke in mind, but Woking will do. Rather apt, in fact, that we've been paired with them as it gives me an opportunity to belatedly highlight what Macleod (M) and I were up to as Drax's boyz were busy thumping the Cards at York Road in the 2011/12 3rd Qualifying Round: accompanying Trevor Kingham's daughter, Denise, on a five-mile charity walk from the Royal Hospital for Neuro-disability (in Putney) to Loftus Road (ahead of QPR vs Blackburn Rovers). We didn't attend the game, instead drinking and chatting with Denise and her Mum in the Loyal Supporters Association's underground HQ - and then the Springbok - before going for a curry in the evening. If, unlike Rangers chairman Tony Fernandes (yes, that is him in the above photo; apparently making his very first appearance in the LSA bunker), you have yet to give generously to the charity, then please consider it; a very worthy cause. Trevor is missed. Always. And certainly last Saturday!
Posted by Lenny Baryea at 19:40

A most enjoyable read Foz, well done. If I was wearing a hat, I'd be doffing it to you right now. But I'm not.