Salisbury City, along with Maidenhead United, regularly featured prominently in 'Top Five Away Day' lists on the now (temporarily?) defunct Conference South forum. Despite the ground being out of town, it is not hard to understand why. On the less-than-ten-minute walk from the train station to the High Street - down Fisherton Street - we were to pass approximately four pubs (of varying quality), two licensed sex shops and about ten (no exaggeration, honest!) Indian restaurants.

After a quick pint in the King's Head (Wetherspoons), where Craig and I discussed the (perceived) pros and cons of Scottish independence, we headed to a far superior Greene King pub opposite (called the Mill and, I'm sure, very popular in summertime). Here the relatively high-brow conversation continued with the welfare state, among other topics, extensively debated. All we needed was a C-list celeb, a chin-stroking Guardian-reading leftie, David Dimbleby and a cherry-picked-by-the-BBC studio audience, in order to have our very own edition of Question Time! 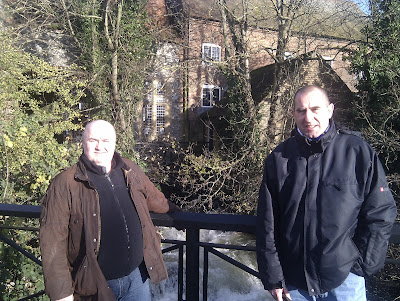 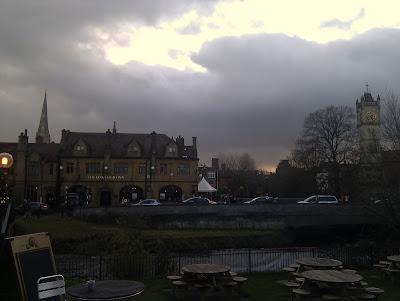 As aforementioned, Salisbury's current ground - the 1997-built  Raymond McEnhill Stadium - is out-of-town. In fact, our taxi ride from the city centre took over ten minutes. The taxi driver - who seemed to have little or no interest in football - pointed out the location of Salisbury's former home, the iron age hill fort of Old Sarum itself and also mentioned that we were less than ten miles from Stonehenge, before dropping us off outside the ground entrance.

The ground was situated at the end of Partridge Way (A-ha!), a road which slalomed through a soul-less, indentikit housing development. The driver mentioned that the football club could soon be on the move again, with the housing estate likely to be expanded in the near future. It quickly became apparent that most Salisbury City fans, certainly those of sound mind, will surely jump at the chance to up sticks.

The expansive car park that greeted us (which, along with the industrial plant in the distance - and the car tyres that rather bizarrely surrounded the pitch - brought back memories of Berwick Rangers' Shielfield Park) contained countless large potholes and it was clear that the ground was one that 'ticked the boxes', but not a lot else. One clubhouse/main stand (containing, I assume, the very minimum number of seats required), one covered terrace and that, basically, was it.

Our MUFC Ltd away games this season have included Truro, Weston and now Salisbury. When I say that Weston's is probably the best ground of the bunch, then you get an idea of how poorly I rate Truro and Salisbury (although the latter not nearly as bad as the former, it must be said). 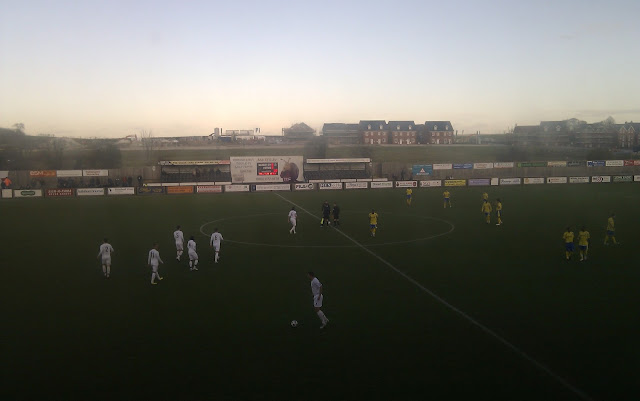 Having paid a barely believable £13 to get in ("£13, you're having a laugh"), taken the usual array of 'joyless regulation' photos, chatted amiably with the stewards and queued for a (decent) burger and chips, it was time to join the other travelling Magpies, on the covered terrace, behind the goal we were attacking (in amongst the majority of the home fans who, understandably, didn't move but, fortunately, weren't nearly as sensitive nor unreasonable as those who hadn't changed ends at Ebbsfleet last season).


Amazingly, United were two up before I had chance to finish my lunch; the goals coming within two minutes of each other around the midway point of the first half. Like at Truro (another west country team with a cr@p ground - who play in white - and who lost to a yellow and blue-kitted MUFC Ltd), the opening goal was a complete gift from the home side's keeper. "Oh oh oh, makes me wanna dance" exclaimed the MMS. Tut, tut. This chant should only be sung when United are 2-0 up, as per Halifax Town away, when it was first coined. Logic noticed my scorn; "We have to make allowances," he tentatively pleaded "as we hardly ever take the lead in a game these days, let alone 2-0".

The second was a great goal as well; the much (and harshly?)-maligned Jermaine Hinds winning a 50/50 and playing a neat pass to the impressive Reece Tison-Lascaris, who beat his man and sliced open the defence with a through-ball to Richard Pacquette. With only the hapless keeper to beat, Pac-Man executed a superb, deft chip to stun the home crowd. I now joined in with the Modern Romance song, and the subsequent mickey-taking of the surrounding home fans ("Are You M@rlow in disguise", "Can we play you every week", "How sh!t must you be ... ", "You should have gone Christmas shopping" etc.)

As hoped, but not expected (by me, at least), it was a case of 'After the Lord Mayor's Show' for Salisbury City, fresh (or not, as it transpired) from their 3-2 AET FA Cup win at Grimsby Town in midweek. They looked shell-shocked, not surprising seeing as Maidenhead hadn't won in the league since beating Havant & Waterlooville at York Road on Tuesday 13th September! One of their unused subs (I think) got his marching orders, while players surrounded the Ref and there was a chorus of boos (largely for the officials, although I'm not really sure why) as the teams departed the pitch at the break.

The scoreboard was impressive (and the score-line it showed was a welcome sight) but the uncovered end inhabited by the away fans during the second half emphasised what we were quickly coming to conclude; that the Raymond McEnhill Stadium is an underdeveloped sh!thole. The wind was absolutely freezing, while the persistent swearing of a certain MUFC Ltd fan was moronic and embarrassing. Director Stevie G and the Chairman must've heard it, but neither said anything. Pathetic. Simple as that. To think that we got ejected at Ebbsfleet - and then banned from York Road - for nothing, certainly nothing compared to what every away fan at Salisbury could hear ...

Salibsury - sent out early for the second half with, presumably, a rollicking still ringing in their ears - were improved in the second half but, while both teams missed simple chances to score (Pac-Man with Maidenhead's clearest opportunity; getting it all wrong when attempting to replicate his delicate finish from the first half), Billy Lumley and Mark Nisbet were back and in excellent form for the Magpies, ensuring that Maidenhead looked reasonably solid and comfortably held out for a long-overdue win. 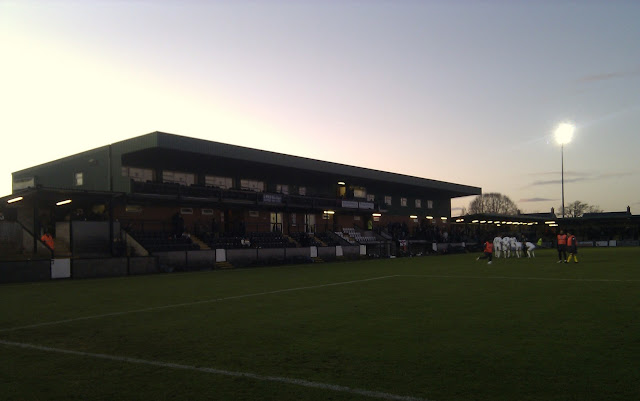 No doubt I'll get accused (as usual) of being 'anti Drax' and 'anti club', but it should be pointed out that while Maidenhead performed much better than they did at Weston, Weston were much better than Salisbury (and Truro). Indeed, before the MUFC Ltd forum was made register-to-view, let alone post (I haven't 'upgraded' as yet, and I'm not sure that I will, as it'll likely only lead to further unfounded accusations - via Private Message - from the Chairman), I read on there that Maidenhead's record against teams in the top half of the league is abysmal (which makes the 4-1 FA Cup win over Woking all-the-more remarkable), certainly when compared to the record against lower-half teams. Salibsury are now 17th (one place above Maidenhead). Weston are 9th. Enough said.

"McKendrick's 12 Days of Christmas", "Jingle Bells" and then a prolonged burst of "Johnson Hippolyte's Black and White Army" kept us warm(ish) and helped pass the time until the final whistle. Then, as Rainey and his bunch hot-footed it for the next available train, an improvised version of Sham 69's 'Hurry Up Harry' was given a début airing. Magical!

Time, post-match, for some more photos, a quick drink in the clubhouse and a pat on the back for Bobby 'The Daddy' Behzadi, before our return taxi ride into town.

This driver laughed at us when we asked to be taken to a pub showing the Wigan vs Chelsea game (for Craig). We thought that he was exaggerating and we'd surely be able to find somewhere but, after decent-looking historic boozer with open fireplace after decent-looking historic boozer with open fireplace came and went - with none showing the football - we had to concede defeat and so enjoyed a round in the Queen's Arms of Elizabeth ("Salisbury's oldest licensed public house since 1558") ... which had Total Wipeout on the TV. 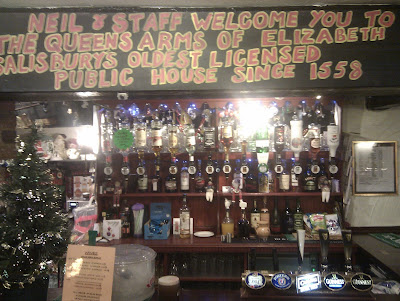 After a walk through the historic (and, I thought, Berwick-upon-Tweed-esque) streets of Salisbury city centre - past a beautifully-fronted Odeon cinema showing the latest Sherlock Holmes movie and not a lot else - then another drink back at the King's Head (where we were - just about - able to name the winners and hosts of every single World Cup and European Championship), we headed to the Shah Jahan, an Indian restaurant recommended to us by the most recent taxi driver. 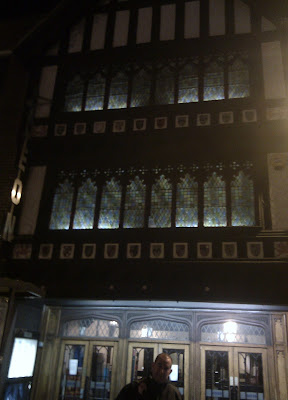 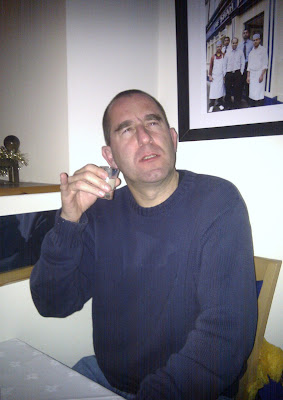 Post meal (top notch, BTW) there was time to purchase a carry-out and then enjoy a quick drink (Smirnoff Ice all round!) in the Railway (which was better, albeit only slightly, than it's neighbour - the Cat Tavern - which we'd had the 'pleasure' of drinking in immediately after coming out of the station earlier in the day) before catching the 21:30 (give or take) train home. Cue a deliberately camp photo (for reasons that I now can't recall), a brief stop in a (thankfully) well-heated waiting room at Basingrad (complete with eye-catching wall decoration) and the KSG entering into the spirit of the season by gifting not one, but two, cans from the carry-out to thirsty train passengers, before arrival back in Maidenhead. 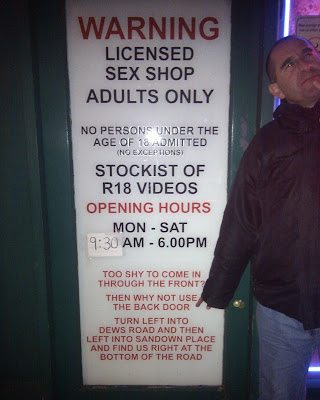 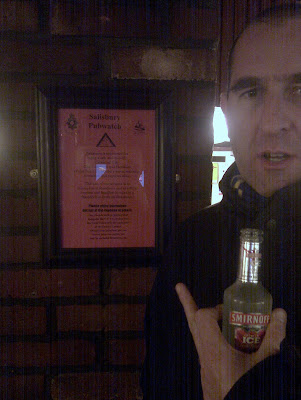 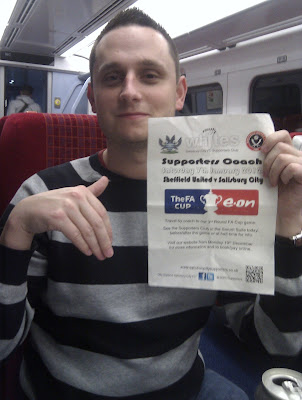 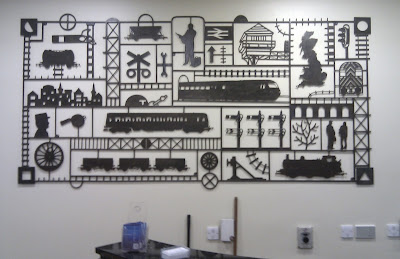 Salisbury City a top five away day? Well, I'm not sure there are five decent away days to be had in the Conference South, currently, but Salisbury is definitely one of the better ones. And winning, while not a deciding factor, certainly doesn't hurt!